Well, it hasn't taken me long to get back to my number one gaming passion - Zombicide. This time, however, I'm reviewing something decidedly far from the norm - zombie crows or crowz as Guillotine Games insist on calling them. In case you didn't know, the collective term for a group of crows is a murder of crows. I first became aware of zombie crows when I saw Resident Evil: Extinction. These figures make a great addition to Zombicide and could be used in many other games, either as zombie crowz or normal crows.

Stat-wise in Zombicide, Crowz are rather nasty. They can move up to three Zones per Activation, making them incredibly fast. However, they still only get one Activation per Turn, either moving or attacking. Murder of Crowz have the same Targeting Priority as Toxic Walkers (i.e. they come second on the chart after Survivors) and they only require one Wound to kill (note that is one Wound per stand not per crow!). Being flying pests, Murder of Crowz ignore ALL obstacles hindering or preventing movement when they move (including barricades, closed doors, Hole Zones, observation towers and walls). They also ignore game effects preventing them from staying in a Zone like Rubble or Security Zones.

The stand of six crowz is a thing of beauty. The sculptor has done a truly amazing job to fit six crowz on one base so cleverly. My reaction when I first saw them was, "WOW!" These are amongst the best sculpted figures I have ever seen. As for painting them, what could be easier? I primed them in black, painted the bases various shades of grey, painted the crowz matt black and added a dot of white for their eyes. It was time consuming simply because I painted all 20 stands in one go. 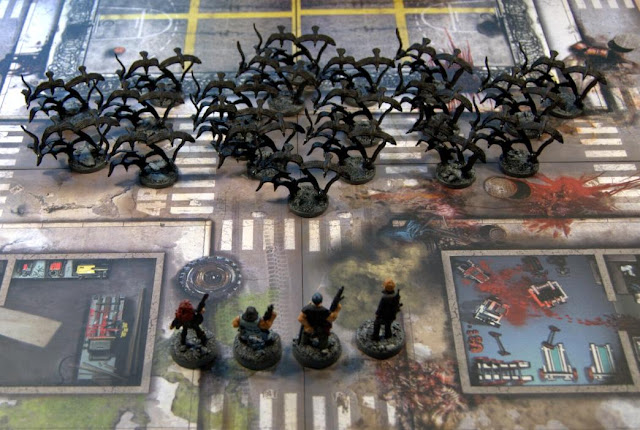 In the photo above Team Vampifan (remember them?) face a huge Murder of Crowz. Here I show the 15 stands of Crowz that come with the boxed set plus an extra 5 stands that I received as a Kickstarter free bonus for backing Zombicide Season 3. That makes for a total of 120 Crowz. Team Vampifan better hope they don't run out of ammo!
The Murder of Crowz expansion set is currently available from Amazon UK for £18.19.
Posted by Vampifan at 10:48