In a game like Castle Ravenloft the most common type of villain your Heroes are likely to encounter are, of course, the Undead. So far I have reviewed Vampires, Wraiths, Blazing Skeletons and Skeletons as part of the Undead in this Dungeons and Dragons board-game. Today, I turn my attention to the flesh-eating Ghouls and Zombies.

I'm almost certain these are first Ghouls I've painted in the last thirty years. I painted them in a very light grey skin tone (Foundry Austrian White 67) and gave them red eyes to help distinguish them from my zombies. They do look very similar to my zombies but are noticeably lighter in real life.
The stats for a Ghoul are AC16 (very high for a monster) and 1HP. Killing one earns a Hero 2 Experience Points. 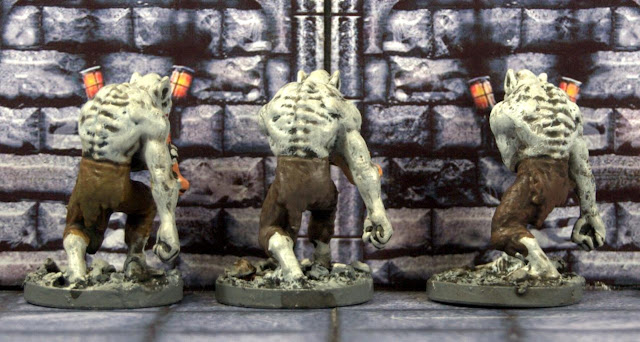 I must admit that I am rather underwhelmed at the way the Zombies have been sculpted. They lean forward far too much and quite frankly, they pale in comparison to the way the  Ghouls have been sculpted. I normally enjoy painting zombies but I admit that painting these three was a chore.
The stats for a Zombie are AC11 (the lowest of any monster in the game) and 1HP. Killing one earns a Hero 1 Experience Point.

A Zombie's tactics are -
If the Zombie is within 1 tile of a Hero, it moves adjacent to the closest Hero and attacks that Hero with a rotting Fist.
Otherwise, the Zombie moves 1 tile toward the closest Hero.
A Fist attack gives a +5 bonus to hit and causes 1 damage for each Monster on the Zombie's tile.
Whilst the Zombies are meh! in terms of sculpts and stats the Ghouls are terrific and make for fearsome opponents.
Posted by Vampifan at 10:31