Berserker Zombies were introduced in the Zombicide Season 2: Prison Outbreak supplement. I'll begin the first of my many reviews of them (I do have lots of them to show!) with a close look at the most dangerous of all - the Berserker Abominations. 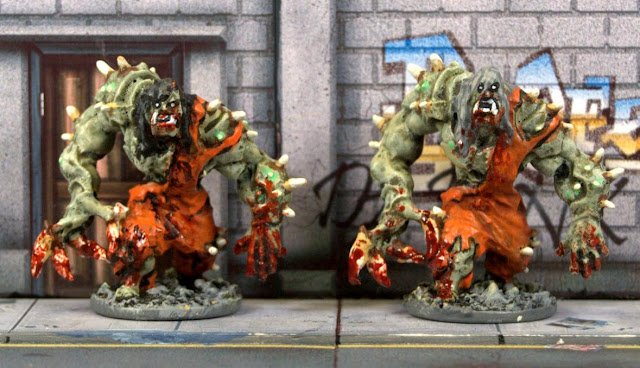 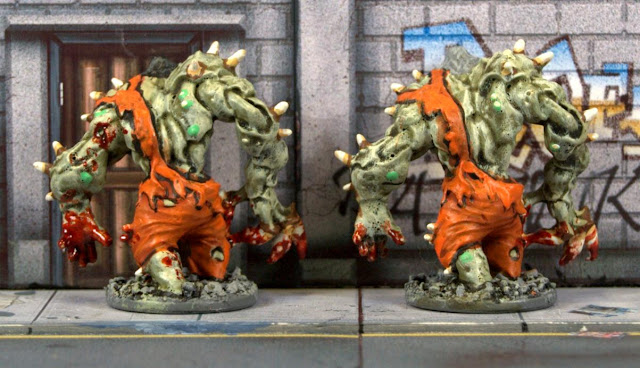 The Prison Outbreak boxed set only includes one Berserker Abomination figure but I picked up a second one as part of the stretch goals for backing Season 2. According to the rules, it is perfectly okay to field two or more Abominations in a game, if you have extra figures of them. Otherwise, spawn a Fatty with its escort of two Walkers of the appropriate type.
I decided that the easiest way to differentiate between my two Berserker Abominations was to give them contrasting hair colours, so one is black-haired and the other (obviously much older) is grey-haired. The various Abominations are always impressively sculpted and these are no exception.  Check out those claws on their right hands. They could slice a man in two! I have been waiting until I painted all of my Berserker Zombies before using them in a game. Now that they are all finished I'm looking forward to trying them out in a few scenarios. Wish me luck!
Posted by Vampifan at 06:02