One of my favourite web-stores is Wargames Terrain Workshop, run by Dave Stone, who has become a very good friend of mine. Dave has been picking my brain for ideas for scenery and figures to use in the Judge Dredd Miniatures Game but to keep them generic enough so as to avoid copyright problems. Dave is a huge 2000AD fan so it has been a lot of fun swapping ideas. I therefore make no apologies for the bias of my review here. However, WTW are not a widely known company so the main purpose of this review is to spread the word about them to a wider audience and hopefully drum up more business for Dave.

One of the first scenery items I asked Dave to make were Justice Department holding posts. These are used to handcuff perps to the post, where they are held in place until they can be transported to a Sector House or Iso-cube facility. The actual Justice Department holding posts have an eagle sculpture on top of them but I understand why Dave omitted it as it would have made them too distinctive as belonging to Judge Dredd. Nevertheless these are perfectly acceptable substitutes. To give you an idea of how tall they are I have included a Wargames Foundry figure of Judge Dredd in my photos (this is actually the figure I use for my own Judge Scott in my JDMG campaign). A set of two holding posts includes one with two arms and one with four arms and they cost £1.00 unpainted or £1.80 painted. I bought two sets of the unpainted versions. My colour scheme is slightly different to Dave's. I gave mine gold tops not silver as Dave had done. They are listed as Prisoner Posts in the Future Scenics section of the WTW webstore. However, they would work equally well as posts for securing bicycles in a contemporary setting.

Next on my list of items I wanted sculpting were garbage disposal units. These are essentially litter bins that grind any rubbish put in them into tiny pieces to make it easier to dispose of. They have also been used to illegally dispose of bodies or body parts! These also come in two versions. As soon as I saw them I was struck by how much they look like garbage droid Ro-Jaws from the Robusters and ABC Warriors series from 2000AD comic. I just had to include this Wargames Foundry figure of Ro-Jaws in one of my photos.

My colour scheme for the garbage disposal units is almost identical to that of Dave's but I extended the yellow border all the way around the mouth section to provide a better contrast for the word, WASTE. As you can see with this photo directly above with the Judge, they are quite tall and chunky. Once again, they are very reasonably priced. A set of one of each of the two types costs £1.50 unpainted or £2.70 painted. Yet again, I bought two sets of the unpainted versions. 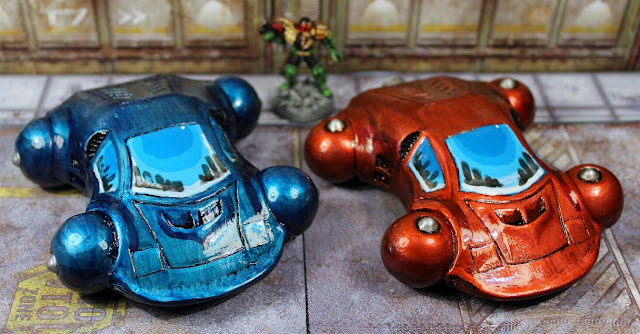 One item in particular that I was very keen to see was a futuristic car. Dave has really surpassed himself with this absolutely amazing sculpt. When I saw them on the WTW webstore I wrongly assumed they were quite small. It was only when I received them through the post and was able to see them in the flesh that I realised these are really big sculpts. This is why I have included the Judge figure in my photos to show how big they are.

The really clever thing that Dave has done with them is to allow you to use them as a ground car or a hover car. You can see the subtle differences between them in the two photos above. The blue car is the ground car and the red car is the hover car.

Dave has named these as a Lamborarri 2000 Sports Car. I like the name!

For such a big chunk of resin, these are incredibly cheap, costing just £5.00 for an unpainted model.

However, when I saw how incredibly well Dave had painted his, I knew that A) I would struggle to replicate his colour scheme, and B) it would be a time consuming paint job. So I ordered the painted versions of the two cars. They cost £9.00 each, which to me, was an absolute bargain.

Dave was incredibly helpful, and he asked me what colours I wanted them painting in and even asked what I'd like on their registration plates. Having fallen in love with Dave's red car I asked for one just like it and for the other, a blue version. The number plates do have meaning. WTW 1 stands for Wargames Terrain Workshop 1 (an obvious choice, I felt) and BS 24 is my initials (Bryan Scott) and the day of my birth.
For me, the highlight of these models are the two Lamborarri 2000 Sports Cars. They have already made an appearance in one of my JDMG batreps (see here ). These are just the start of what will be a growing range of scenery items. Indeed a few more items were only recently added and I'll review them very soon. What makes these items so special to me is the fact that they all come from ideas that I suggested to Dave. That gives me a personal connection to them, so forgive me for my unashamed bias towards them. The following link will take you directly to the Future City Scenics section of the Wargames Terrain Workshop webstore - http://wargamesterrainworkshop.co.uk/?product_cat=futurecityscenics
Posted by Vampifan at 09:06