As you know I am slowly building up quite a collection of 28-32mm scale Old West figures, buildings and scenery. Whilst most of my figures are humans, I have also been adding various animals and birds that are appropriate for this genre. In this post I want to showcase some of them.

These three impressive looking bears are grizzly bears produced by Acheson Creations. These are part of the Primaeval Designs range of Prehistoric Mammals and are actually sold as Giant Cave Bears, but I thought they would make perfectly acceptable grizzly bears. I actually acquired these as part of a Kickstarter that Acheson Creations ran a few years ago to promote the Prehistoric Mammals range. This set was one of the optional add-ons you could buy.

The grizzly bear is a large sub-species of brown bear inhabiting North America. Scientists generally do not use the name grizzly bear but instead call it the North American brown bear. Note the pronounced hump on its back (particularly visible on the centre figure). This is a good way to distinguish a grizzly bear from a black bear, which does not have this hump. 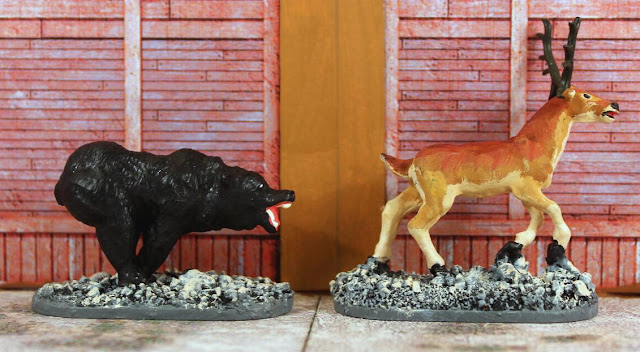 Here is a black bear, and it is noticeably smaller than the grizzly bears. This figure was produced by North Star and was a freebie for those who bought all three of the latest factions in the Dracula's America range. Certain individuals in the Skinwalker tribes can transform into either a bear or a wolf, which explains why this bear figure was included. The black bear is a medium-sized bear native to North America and is the continent's smallest and most widely distributed bear species. The American black bear is the world's most common bear species. 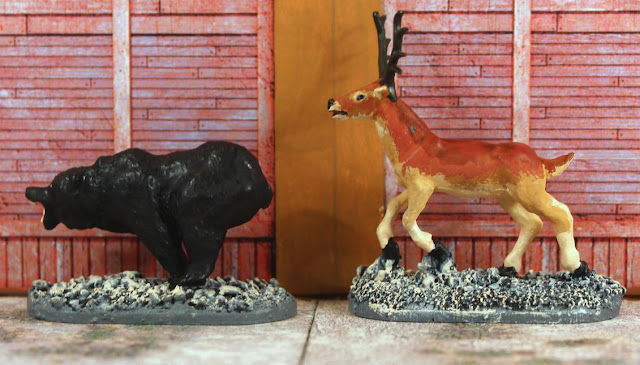 The animal alongside the black bear is a reindeer produced by Ral Partha, but I'm using it as an elk because reindeer are not native to North America, but elks are. This is specifically a Rocky Mountain Elk. This was a two-piece casting, with the antlers being separate from the body. There are six sub-species of elk, which can be found in North America. Until recently, red deer and elk were considered to be one species, but DNA studies indicate that elk should be a distinct species.

These three animals are coyotes, which are native to North America and are widely distributed across the continent. The coyote is smaller than its close relative, the grey wolf, and slightly smaller than the closely related eastern wolf and red wolf. These figures were sculpted by Johnny Lauck who used to run Mega Miniatures before he retired, and were part of a limited edition Kickstarter, Road Kill Animals, which I backed a few years ago. They never went on general release, making them very rare indeed.

As of 2005, there were 19 sub-species of coyote that had been identified. The colour and texture of a coyote's fur varies geographically. I copied this colour scheme from a photo on Google Images, showing a prairie dweller. Mountain coyotes are generally greyer.

These four rattlesnakes are my most recent acquisitions and they are available from TT Combat as part of their resin cast Western Accessories Set, which is an incredibly useful set, containing 26 pieces, including 10 dynamite, 5 cowboy hats, 4 snakes, 4 cacti, 2 animal skulls and 1 dynamite plunger, all for £8.00. The snakes come in two separate sculpts and so I have painted them in slightly different colour schemes.

The 36 known species of rattlesnakes have between 65 and 70 sub-species and all are native to the Americas, ranging from southern Canada to central Argentina. Rattlesnakes are the leading contributors to snakebite injuries in North America. However, rattlesnakes rarely bite unless provoked or threatened; if treated promptly their bites are seldom fatal.

At the far left of these two photos above and below is a hawk, a medium sized bird of prey that is widely distributed around the world. This figure was also sculpted by Johnny Lauck as part of his Road Kill Animals range. I was surprised that he sculpted a hawk and not an eagle but I'm not complaining.

The four remaining birds are clearly vultures. A vulture is a scavenging bird of prey. The two types of vultures are the New World vultures, including the Californian and Andean condors, and the Old World vultures, including the birds that are seen scavenging on carcasses of dead animals on African plains. Some traditional Old World vultures (including the bearded vulture) are not closely related to the others, which is why the vultures are to be subdivided into three taxa rather than two. New World vultures are found in North and South America; Old World vultures are found in Europe, Africa, and Asia, meaning that between the two groups, vultures are found on every continent except Australia and Antarctica. These four vultures are the Californian condor species, the largest North American land bird. The figure sitting on the Tombstone signpost was produced by Black Scorpion as a free stretch goal available to anyone who bought all seven gang factions in last year's Tombstone Kickstarter. The other three figures are more of Johnny Lauck's Road Kill Animals range.
Most of my Wild West games will take place in town settings and so it is unlikely that any of these figures will feature much in them. But for games set out on the range, then they will make for very useful potential encounters. Whilst my default set of Wild West rules, Six Gun Sound, does not have rules for animal encounters, its Weird West supplement, High Moon, does. So too, does Dracula's America.
Posted by Vampifan at 10:25