Last month I finished painting the four Hero characters from the Resident Evil 2 game by Steamforged Games. Each character comes with multiple figures. Made of hard plastic, they are 32mm scale and are realistically proportioned, meaning they do look slimmer than many other 32mm scale figures like those from Mantic's The Walking Dead range. 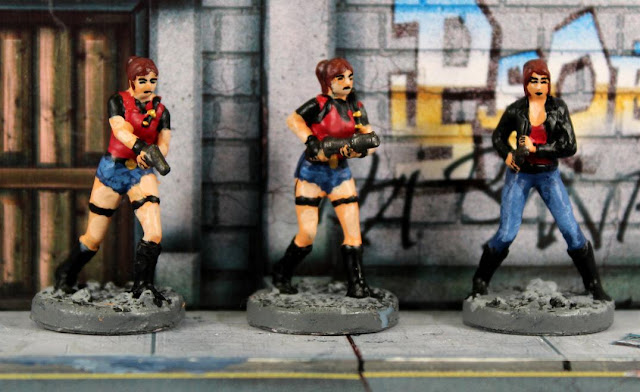 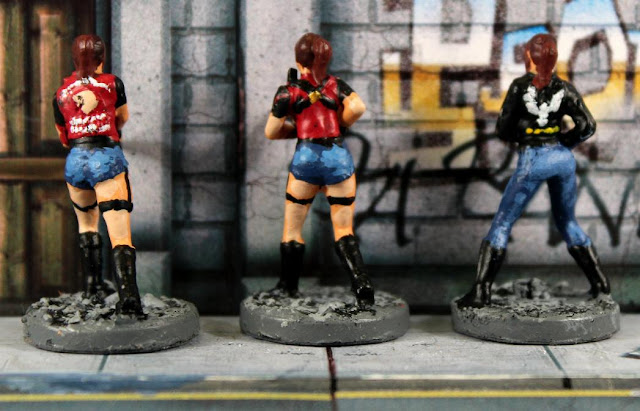 In the game, her special ability is Made in Heaven. Once per scenario, Claire can spend an action to heal another character on the same tile by two levels. 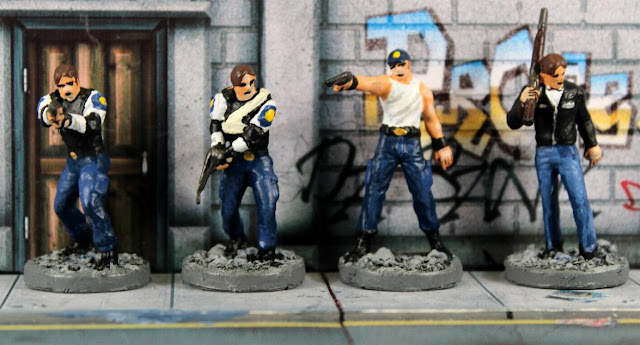 Next up is Leon S. Kennedy, a rookie police officer who arrives in the doomed Raccoon City late for his first day on the job only to confront a zombie outbreak first hand. As the main protagonist of the video game, he comes with four figures. The one at the far left comes with the starter boxed set and has him armed with a pistol and knife. Next in line is a bandaged version of Leon carrying a custom pistol. He was a Kickstarter exclusive. As was the third figure in line, which is a more stripped down version of the first figure in line. Finally is another Kickstarter exclusive which has Leon armed with a shotgun and in civilian clothing. 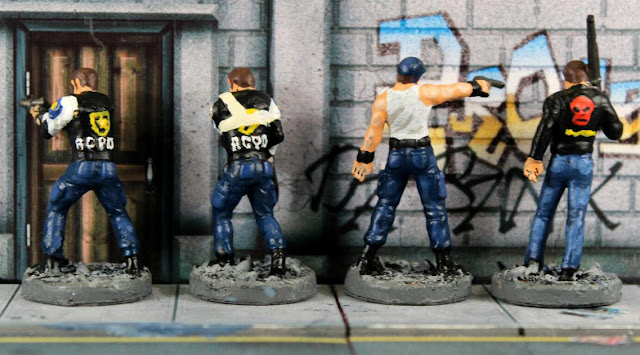 In the game, Leon's special ability is Cool Under Fire. Once per activation, Leon may use an item while one or more enemies are in his square without making an evade roll. Note, this includes any weapon he is carrying.

Next up is Ada Wong, a spy for an unnamed rival company who is sent to recover a sample of the deadly G-virus from Umbrella's lab in the zombie-infested Raccoon City. The figure of her at the far left is the one you get with the starter boxed set and she is carrying a pistol in one hand and a key in the other hand. The alternative version was a Kickstarter exclusive with her armed with a bow gun. In the game she has two special abilities. First is Reckless. At the end of any character's activation (including her own), Ada may take an out of sequence activation. After doing so, she must forfeit her following activation. Secondly, she has Intrigue. Once per scenario, Ada may discard a card drawn from the tension deck without resolving the effects.

Finally, is Robert Kendo, the owner of a gun store in Raccoon City. The figure of Robert armed with the shotgun is the one that comes with the starter boxed set. The other version was a Kickstarter exclusive that has him armed with a high calibre Magnum pistol. His special ability is Marksman. Once per activation, Robert may re-roll all of the dice from an attack roll, providing the weapon used was not a knife. He must keep the results of the second roll.
I do like these figures. They are well sculpted and posed and I do like having multiple figures of a character. Being realistically proportioned, their facial details are a bit soft. Rather unusually, they all come on 20mm diameter bases, which makes a change from the usual 25mm diameter bases. I knew Claire, Leon and Ada from the Resident Evil films but had never heard of Robert before. I had to check up his background on Wikipedia to find out who he was. The four work well as a team and I was delighted that all four survived my first play-through of the short campaign from the starter box.
Posted by Vampifan at 11:33