Following on from my last figure review, here's another new company producing 28mm scale zombie figures - Tengu Models. They are a UK based firm and I'm going to review their first three packs of exquisitely sculpted zombies. Be warned, if you are offended by nudity then look away now.

The four female zombies shown in the two photos above are from set BH02 Z Chicks. I was delighted that Tengu's first set featured female zombies, because there aren't enough out there. First up is a young woman dressed in a pale lilac dress and emerald green leggings. Her pose is a very simple one but leaves you in no doubt that she is one of the undead. Her mouth is agape, which is a nice touch. There are a few holes in her dress, which I've bloodied and a bite has been taken out of her right forearm.
The figure next to her has the look of a trailer trash girl. I love how, even in undeath, she maintains her spaced out look as she stares skyward. Brilliant! She wears a skimpy boob tube and denim miniskirt. I just had to paint her with dyed blonde hair. Note the black roots showing through. I couldn't find any wound marks on her, so perhaps she died of a drugs overdose.
Next in line is a double treat for me - an African-American female. That ticks two of the minority boxes in one go. Cool! Although she isn't in a very animated pose, that is not a criticism. Her pose is just fine and you can tell at a glance she is a zombie. Note, the slight tilt of her head, the way her arms are splayed out to the sides and how she is slightly unsteady on her feet. These are little understated touches that help instantly identify her as a zombie. Her hoodie coat has a tear at the back but other than that, she is unmarked.
Last in line is the most animated of the four females. This zombie leans forward with an outstretched arm, as if making a grab for someone. She is smartly dressed in a vest. midi-skirt and knee-length boots. Her wounds are the most severe out of this group. Her left cheek has been chewed off and she has a bite wound to her lower left arm. I'm wondering if she is holding her right arm to her side because it has been broken. It's a possibility. When you start thinking about how a figure received its wounds you know you're onto a winner!

This next set is imaginatively called BH07 No Time to Dress. The precedent for nude zombies was set by George A. Romero when he made his first zombie film - Night of the Living Dead. You'd have to class these zeds as a minority group. They may not be to everyone's taste but I think they're ace!
At the far left of the two photos above is the only male of the group. The body has been sculpted by someone with a good understanding of human anatomy. I wish I knew who the sculptor was but Tengu are keeping his identity under wraps. To be honest, his work reminds me of that of Kevin White of Hasslefree Miniatures fame, but it isn't him. This figure has been wounded four times. There is a deep cut just under his right breast near to his armpit. he has bite wounds to his lower left arm, right shoulder blade and left buttock.
The blonde-haired woman next to him does not have matching "cuff and collars," a colloquialism meaning the hair on her head is a different colour to her pubes. In other words, she isn't a natural blonde! She also, has four wounds, but they are all very small. A piece of her left cheek is missing. She has small (bullet?) holes in her lower left arm and right side of her back, in addition to a small cut to her lower left leg.
On the Tengu website, the next female in line was painted up with light brown skin. However, the way her face has been sculpted, she could just as easily be painted up as a Caucasian woman. Even so, I've stuck with the colour scheme that Tengu's official painter chose, simply because I like to see ethnic diversity. In my opinion, she is the best looking woman out of the group and her pose suggests that she is quite alert. She has been badly bitten in the left thigh and lower right arm, and has a minor wound to her lower right leg.
The final figure from this group is not totally nude, as she wears panties and socks. She is bent forward, clutching her stomach with her right arm. She has a large gaping wound to her right arm and a bite taken out of her lower left leg. I find her pose rather disturbing, as she looks like she is in agony. I'm wondering why she has her thighs clamped so tightly together? She is a terrifically sculpted figure. 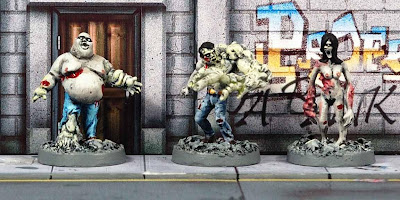 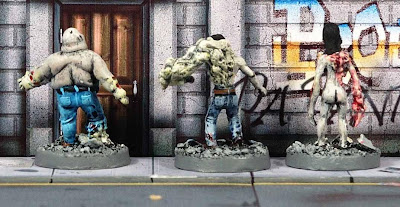 ﻿The final set that Tengu offered as part of its initial releases is set BH06 Boss Zombies and this may not appeal to everyone. I guess it all depends on your views about "end of level" mutated zombies from certain computer games. I confess, I am not a computer games player - I simply don't have the time to commit to them with me having so many other projects clamouring for my time and attention. That said, I wouldn't dismiss them for source material for fans of the genre. Even though this trio of zeds are mutated, I was more than happy to add them to my horde.
First up, is one of the fattest zombies I have ever seen. I think he's the bees knees! He's so wonderfully gross and his beer gut is mightily impressive! His skin under his right breast, at the left side of his stomach and on his lower right arm appears to have been stretched so tight that it has burst open, to reveal muscles and sinews. His hands and right leg are clearly diseased and bloated. I painted them in GW Rotting Flesh to highlight the decay. He is one of my all time favourite zombies. Do you know, if you ignore the diseased flesh areas on him, you can see guys dressed just like him and as obese as he is at St. James's Park, home of my local football team, Newcastle United. I shall name him Jimmy "Five Bellies," a name that will be familiar to any fellow Geordies reading this. Note that he comes in two parts, with his left hand being a separate component.
The zombie in the centre of this group sports the most severe mutation. The left side of his face and torso and his left arm have warped into something unnatural. Again, I painted the mutated areas in GW Rotting Flesh and gave it a GW Thraka Green ink wash, before drybrushing it with a 1/1 mix of GW Rotting Flesh and GW Skull White. As you would expect, he is not a one-piece casting - his long left arm is a separate component.
The naked female bridges the last set with this set. Her arms have grown so long they almost reach down to her ankles. Also, her head appears to have elongated as well. The areas of her body that are infected by odd bumps and blisters have been given a GW Baal Red ink wash to make them stand out from her pallid grey skin. I like how her mouth is wide open in a lop-sided scream. Is she angry or in pain?
Unlike the vast majority of figures, these do not come with slottatabs but integral metal bases. These bases are very small and very thin. There is an excellent help guide on the Tengu website showing how to base their figures and three options are provided. I went with option two, which involved sticking the figures to slotta-bases and filling in the slot with Milliput modelling putty, then adding Milliput around the metal base before smoothing it flat. Finally, I glued sand and small pieces of Fuller's Earth cat litter to the base to give it my usual rubble strewn look.
If I say that these figures remind me of Hasslefree Miniatures, both in terms of size and sculpt quality, then take that as high praise. These are top notch figures and I can find nothing to criticise them. Sets BH02 and BH07 cost £8.00 for four figures. The Boss Zombies are more expensive, costing £11.00 for the three figures. I was going to say that I hope they produce a lot more zombie figures, (after all, what are sets BH01, BH03, BH04 and BH05 going to be?) but when I checked their website this morning I noted there were indeed more zombies, although from a different range - 1920's style zombies. Needless to say, they're on my shopping list.
Posted by Vampifan at 15:59