Once I'd finished making my police station I knew what was going to be next on my card modelling list - police patrol cars. You can't have a police station without any patrol cars. Up to now the only police vehicles I'd made were a police van and two interceptor patrol cars. I needed some bog standard police cars. In other words, these -

Four seemed like a fair number to build, just to start off with. I may build some more in the future, but for now I'm happy with these four. You get two cars on an A4-sized sheet, with the numbers 01 and 02 on their roofs. WWG very helpfully provide a bonus sheet with an extra 36 numbers printed on with the numbers 03 to 38. I can't imagine anyone making 38 police patrol cars but if you're mad enough to want to the option is there. 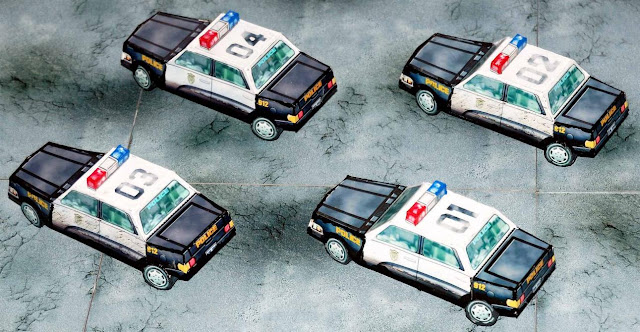 Here's a hint for you if you're using any of the higher numbered roofs. I cut out the roofs of cars 01 and 02 and replaced them with numbers 03 and 04. These were kept in place by strips of masking tape on their reverse side. This made folding down the back, front and sides much easier. Some of you may be tempted to glue the new numbers directly on top of the old ones and this is certainly a viable option. I decided not to as it would have made their roofs slightly taller. I should point out that I printed these onto 250gm Satin Photo Paper, which is a lot thicker that the matte photo paper I normally use. I like to use Satin paper for most of my vehicles as it gives a nice shiny look to them, without being too glossy. I have used Gloss Photo Paper on a few of my cars, like the aforementioned police interceptors and on my sports car. These are the kind of vehicles you expect to see highly polished.

This front view of two of the cars shows an inherent design fault that is only noticable when viewed from this angle. Check out the wheels - they appear to bent at an odd angle and are pointing inward. This is due to the sloping sides of the car. However, when viewed from above as in the two previous photos it is barely noticable. Personally, I can live with it. If they look good on a gaming table then I'm happy.

At first glance the two cars look identical (apart from their roof numbers) but they aren't. The difference is subtle but car 01 (at the left in the above photo) is cleaner than car 02. Car 02 has more mud splashes on its sides than car 01.

And the other difference is that they have different number plates., as you can see here. I'm not sure why one is a combination of letters and numbers and the other is made up of just numbers. Probably an American thing.

You can see the mud splashes on Car 02 better on this photo than on the previous one. If you want to use these cars in your own games they can be found in the World Works Games' set, Mayhem Police. The set is very good value for money at $11.50 and can be found in the Vault section of the WWG web page. Not only do you get these cars but also the police station itself, and some more vehicles - police van, motorcycles, helicopter and SWAT APC. The latter three are on my list of models to make.
These police patrol cars are very useful models to have. I wish I'd made mine a lot earlier as they'd have been perfect to use in the ATZ scenario - Quarantine from the Haven supplement. Expect to see them making an appearance when I play my "Assault on Precinct 13" scenario later this year.
Posted by Vampifan at 10:50