ATZ-FFO is far and away my favourite zombie skirmish game. I like the rules a lot but there are a few things that I want to do differently. So, I have come up with these House Rules, which will remain in place throughout my campaign.

CO-STARS. FFO uses two types of character - Stars and Grunts. I'm introducing a third type - Co-Stars. A Co-Star is simply a Grunt with the Star Power Advantage. This is actually allowed in the rulebook, but to differentiate Grunts with this Advantage from those who don't have it, I decided to call them Co-Stars. This will include anyone recruited by Vampifan. So from the outset, Big Sil, Angie and Gap will be Co-Stars. Just remember that Star Power can not be used against zombies. Also, note that Star Power is the only Advantage that a Grunt is allowed.

SKILLS. In my campaign Rep is no longer the all-encompassing power that it usually is. Now, Driving, Melee and Shooting are separate skills. To these I have added People and Savvy (as per the FFO rules) and Fitness, which is used for any Physical Challenge. A character begins with three skills of his choice at a level equal to his Rep, two skills at a level equal to Rep -1 and one skill at Rep -2. Rep is still used for Initiative and anything not covered by the listed skills. This is one of the biggest changes I have made to the rules, so it is important to bear it in mind when reading my batreps.

ATTRIBUTES. A Star can still have two Attributes and a Co-Star or Grunt can have one Attribute but instead of dicing for the Attribute I choose the Attribute that I think best reflects the character. In addition, I do not limit myself to the choices given in the FFO rulebook. After The Horsemen (ATH) is a great source for extra Attributes.

RANGED COMBAT WEAPONS. In addition to the weapons listed in the FFO rulebook I am adding the non-firearm weapons from ATH to my campaign. Bows and Crossbows are ideal for killing zombies and best of all, they are silent.

TIGHT AMMO. Weapons with a Target Rating of 1 appear to be immune to this rule since they can't roll double ones because they only roll 1d6 to hit. I advocate that they roll a second different coloured die for Tight Ammo purposes. This means that Bows, Crossbows and Bolt Action Rifles can run out of ammo if both dice score a result of double one..

STOCKPILING AMMO. I now have Ammo listed as a separate item that can be found so there is no need to burn a Resource or Item at the start of an Encounter to acquire spare ammo.

MULTI-FIGURE MELEE. I am raising the limit of how many figures can melee a single opponent from four to six. That is two to the front, two to the back and one on either side.

VEHICLES - DRIVING. The Driving Skill replaces all references to a Physical Challenge in the rulebook.

PLACING ZOMBIES. Using the clock face on p.46 of the rulebook, I roll 1d12 to determine the direction a zombie will appear. I allocate one side of the game board as North and 12 o'clock on the clock face is always North.

RESOURCES - AMMO. Ammo is now classed a separate Resource. Just like Food, Ammo is a generic term and can be any type or calibre of Ammo. This is purely to keep bookkeeping simple. 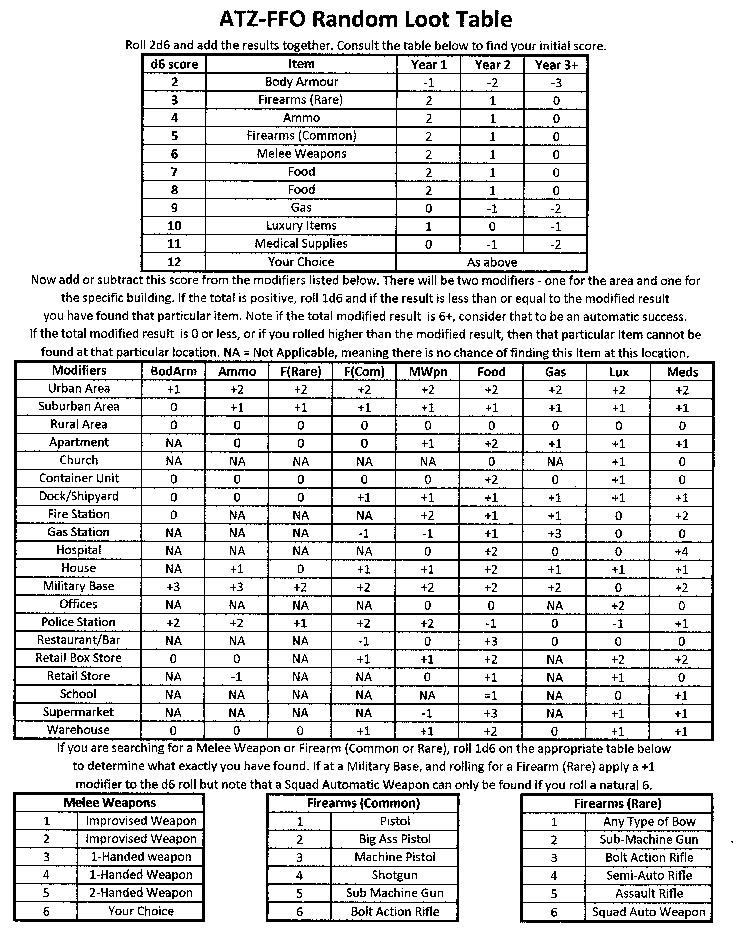 Here's a few examples of how to use the Random Loot Tables.
Vampifan is searching a House in a Rural Area during Year One. He rolls 2d6 and gets a 5 and a 2, which when added together gives a result of 7, denoting Food. Consulting the Loot Table we see this gives him a score of 2. Now we check for modifiers under the column marked Food.. For being in a Rural Area there is a +0 modifier, and for searching a House there is a +2 modifier. Adding them all together gives a result of 4 (2+0+2=4). He rolls 1d6 and scores a 3. He has found one unit of Food.
Next year, Vampifan investigates a Pub (classed as a Bar) in the Suburbs of Mayhem City. Rolling 2d6 on the Loot Table he rolls a 5 and a 4, for a score of 9. This means he is looking for Gas and his initial score is a -1. Not a good start. His modifiers are +1 for being in a Suburban Area and +0 for being in a Bar. When added together we get a score of 0 (-1+1+0=0). Oh dear! Vampifan has zero chance of finding any Gas here so he leaves empty handed.
In Year Three, Vampifan is searching a Warehouse in an Urban Area. He rolls 2d6 and scores a 2 and a 1 for a result of 3. This indicates he is looking for a Rare type of Firearm and his initial score is 0. His modifiers, which we find under the F(Rare) column, are +2 for being in an Urban Area and +0 for searching a Warehouse. Added together, we get a result of 2 (0+2+0=2). He rolls 1d6 and gets lucky with a roll of 1. Now he rolls 1d6 on the Firearms (Rare) table and scores a 4. He has found a Semi-Automatic Rifle.
A building can be searched only once. No coming back and trying later on if unsuccessful the first time. In addition, up to six people may search a building if they are grouped together. If a party contains more than six people you'll have to nominate which six are searching.
If you want an Excel copy of this table, just drop me an e-mail request at vampifan@talktalk.net and I'll send you a copy. I've printed mine out onto an A4 sized sheet of thin card to keep as a handy reference.

MEET AND GREET. This test uses the People Skill and not Rep.

KEEPING IT TOGETHER. This test uses the People Skill and not Rep.
Posted by Vampifan at 11:39