Rum and Bones - What I Got 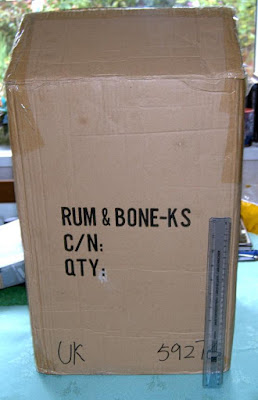 There are days in a gamer's life that stand out as being truly memorable. For me, such days usually involve the arrival of a big parcel. Earlier this year (in March, in fact), I received my Kickstarter parcel of Zombicide Season 3 goodies (see here ). That was truly a red letter day. A few days ago I had another very special day when this huge box to the left of here arrived. The fact that it has "Rum & Bones - KS" printed on one side was a massive give away to what lay inside. It was my Kickstarter parcel for the Rum & Bones board-game. I backed this project in December of 2014 and have been waiting patiently for it to arrive ever since. To give you some idea of how big that box is, I placed a 12" ruler alongside it. The box was huge... and heavy! I couldn't wait to open it up and see what was inside, even though I knew what to expect. It is one thing to see a product on screen but quite different to see it in the flesh. 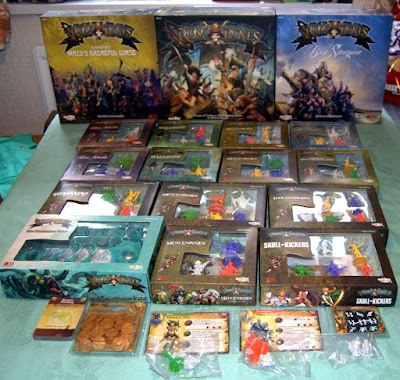 I had cleared my dining room table to give me plenty of space to lay out everything from inside the big box and it was just as well I had, as the table was covered with boxes and packages. This photo to the right shows everything I ordered and I just about ordered everything that was available for the game. The only items I missed out on were a few of the different coloured dice sets, but I didn't feel the need for lots more dice, so that was no big deal. Standing at the top of this photo is the main boxed set flanked on either side by the two expansion sets - Mazu's Dreadful Curse and La Brise Sanguine. 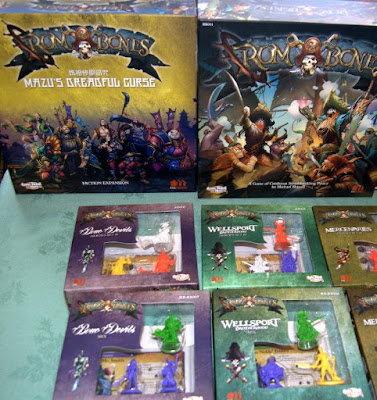 Rum & Bones involves a sea battle between a group of undead pirates known as the Bone Devils and a group of human pirates known as the Wellsport Brotherhood. The base set comes with two game boards showing a large galleon for each side along with 35mm scale figures of 5 heroes, 6 bosuns and 24 deckhands per side, plus cards, counters and full-colour rulebook. The photo to the left shows two boxes containing three figures of extra heroes for each of the Bone Devils and the Wellsport Brotherhood. The hero figures are colour-coded according to their role in the game - Brute (green), Captain (white), Gunner (purple), Quartermaster (red) or Swashbuckler (yellow). These roles confer differing abilities and special rules. 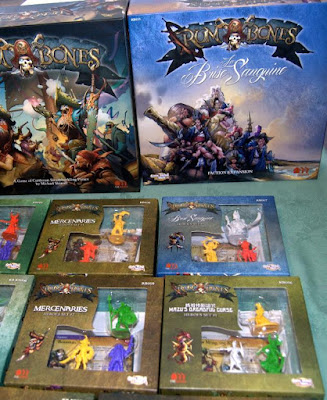 To the right of here are four small boxes, each containing figures of three heroes. Two of the boxes contain Mercenary heroes. Mercenaries can be hired by any of the four factions in the game. The other two boxes contain extra heroes for La Brise Sanguine (translation - the Bloody Breeze), a group of French pirates, and for Mazu's Dreadful Curse, a group of Chinese pirates. La Brise Sanguine pirates use two mid-sized galleons instead of the larger galleons used by the two main factions. However, the pirates of Mazu's Dreadful Curse use a trio of small junks for their raids on the other factions. Full rules, crew figures, cards, counters plus the game boards of their vessels are provided in the big expansion boxes for the two new factions. 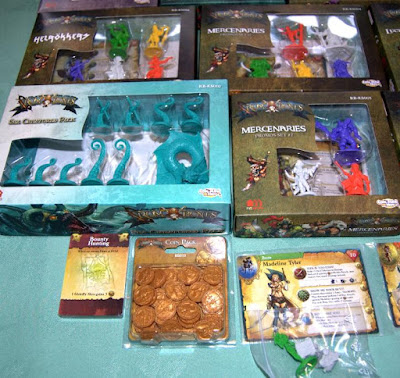 To the left of here are three more boxes of Mercenary figures. The upper two contain five figures each and the one at centre right has three figures. Note that the Helrokkers are a Mercenary group of four musicians plus their manager. They are my least favourite set of figures but I still wanted them anyway. The box at centre left contains a figure of a Sea Dragon rising from the sea and nine tentacles that belong to the deadly Kraken. These two monsters  are a constant threat to all factions that can appear in the game at almost any time. At the bottom of the photo, from left to right, are a deck of cards to be used by a Mercenary faction, a set of 50 plastic gold coins to be used instead of, or as well as, the card coins that come with the basic set, and finally, a figure of Madeline Tyler, a Brute belonging to La Brise Sanguine, plus her ID card. 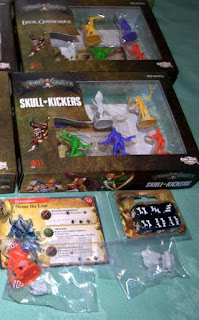 In the photo to the right of here are two more boxes of five Mercenary figures each. The top one is labelled Luck Goddesses and as their name suggests, they are all females. The idea of an all female pirate crew certainly appeals to me. The other Mercenary set are the Skull Kickers. They are a mixed sex group of adventurers from an action/comedy comic series produced by Image Comics. I'd never heard of them before but they look rather cool, so I ordered them. Below the two boxed sets are a figure of Nemo the Lost, a Quartermaster belonging to Mazu's Dreadful Curse, along with his ID card, a set of six black dice (to go with the eight black dice that come with the basic set), and finally, a pair of deck guns.

I'm sure you'll all agree that is quite a haul of treasure and I couldn't be happier. I can't wait to play a few games. I'd love to be able to say that I'll be painting the figures very soon but sadly they must join a rather long queue of unpainted figures. They will get painted eventually, but don't ask me when. The fact that the figures in these sets are 35mm scale may put some of you off but for me size doesn't matter as I can't envisage myself using these figures in any other game. For many, many years I have wanted to own a set of pirate figures to use in a skirmish game. Rum & Bones satisfies that desire admirably and I know that I'll get many years of enjoyment from this swashbuckling game.