For a long time now I have thought about buying the 7TV skirmish war-gaming rules produced by Crooked Dice Games (CDG). I have bought quite a lot of figures from CDG over the past few years and I really like them but I kept putting off buying the rules. Things changed earlier this year when 7TV 2nd Edition (7TV2e) was released. Spurred on by excellent reviews by bloggers like Blaxkleric and Brummie (aka the two Simons), I finally relented and sent away for the starter boxed set last week. Two days later it arrived!
I also ordered the Department X boxed set of 12 figures at the same time. In hindsight I should have ordered an extra set of counters and tokens but I'll add them to my next order. The Department X set consists of Dr. Hugo Solomon (who is instantly recognisable as Jon Pertwee in his role as the third Doctor Who), Pandora King (aka Emma Peel from the Avengers (UK series, not the Marvel superheroes)) and 10 Department X Commandos including a heavy weapons team. I mainly wanted this set for the figure of Pandora King, who I've converted into April O'Neil, the reporter friend of the Teenage Mutant Ninja Turtles. So why didn't I just buy her separately? Well, she is currently out of stock as a single figure option. Not that I minded because the other figures are very useful.
So, for those not in the know, what is 7TV2e all about? This is a simple skirmish game designed to recreate classic spy and sci-fi films and TV series from the 1960's and 1970's, or you can come up with your own ideas of appropriate genre TV shows or films. Films like Austin Powers, Ghostbusters, and James Bond, and TV series such as Captain Scarlet, Department S, Doctor Who, Scooby Doo, Space 1999, The Avengers, The Man From U.N.C.L.E. and The Sweeney heavily influence the game. Fans of any of these classic shows will recognise many of the figures that CDG use for 7TV2e. To avoid copyright problems, CDG created their own fictional studio, 7TV, which made such cult TV series as AKA, A.R.C., Department X, The Beat, The Daredevils and The Man From 2000.
Film and TV terms abound in the game. The player characters and non-player characters (heroes and villains) are defined as Stars, Co-Stars or Extras. Combined, these make up your Cast. A single game is an Episode, split into three parts - Act 1, Act 2 and Finale. A campaign would be a Series.
The game length is determined by a deck of Countdown cards split up into the three Acts of the Episode. Players draw 1 or 2 cards per turn until the deck runs out, indicating the end of that Episode. Episodes can also end if one side is wiped out or loses more than half its cast. The Countdown cards vary from Act to Act. In Act 1 they mainly focus on movement, whilst in Act 2 the focus shifts to attacking the opposition. In the finale, anything can happen! Games are best played on an area 4 feet square but this can vary up or down.
Cast members are either heroes, villains or neutral and all come with their own Profile cards. Each cast member costs a number of Ratings Value points, which are usually 9 or 10 for Stars, 5 or 6 for Co-Stars and under 5 for Extras. The stats of Stars and Co-Stars can be changed if you want to alter any to come up with how you feel that cast member should appear. Changes will invariably alter the Ratings Value.
Game play is simple and the rules themselves are easy to learn. Obviously, the more figures you use in an Episode, the longer it will take to complete. But there is no limit to the size of your cast providing heroes and villains share the same overall Ratings Value. A starter cast might be 20 Ratings, a small cast 30 Ratings, a standard cast 50 Ratings and an epic cast might be 100 Ratings.
Activated characters can take any two of the following actions per turn - Move, Strike, Special or Free. Move is obviously movement, which also includes changing facing; Strike can be a Melee action or a Shoot action; Special includes anything not covered by Move or Strike, such as administering first aid or picking up an objective. Free actions do not count towards your limit of two actions per turn. They cover things like making a statistic test, using a star quality or a gadget.
Both sides acquire Plot Points at the start of every turn, which can be used to activate a character or group of characters, enhance combat rolls, use some of their special effects or gadgets, or to recover from a debilitating status. Unused Plot Points can be carried over from turn to turn.
At the end of a game, both sides add up their Victory Points total and the side with the highest score wins.
I am very much looking forward to playing 7TV2e and already I am thinking up scenario ideas and Casts I want to use. Seeing as my blog is primarily dedicated to the undead, is there an option for including undead creatures in 7TV2e? Yes, there is, although not in the basic set. To date, there are three supplements available for 7TV2e, all of which are downloadable PDF files. These are guides for using characters from Ghostbusters, Scooby Doo and Star Wars. The Ghostbusters guide costs £3, but the other two are free. Ghostbusters includes stats for zombies. Hopefully, further undead types will be covered in future supplements. 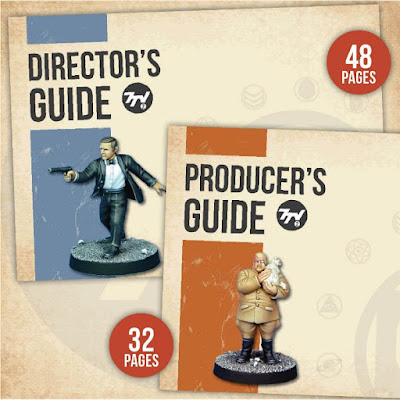 The basic boxed set costs £50 and contains the following items -
The Director's Guide (the core rules of the game)
The Producer's Guide (rules for building a cast, customising Stars and Co-Stars as well as 6 scenarios)
2 decks of Profile cards (heroes and villains)
45 Countdown cards
20 Gadget cards
20 Plot Point tokens
27 Status and Objective counters
A Blast and Flame-thrower template
A pewter 28mm scale Maguffin figure (it's a TV set used as a vital objective)
6 six-sided dice
I know nothing about the rules for the first edition of 7TV, which I've been told is a good thing as I don't have to unlearn them to play 7TV2e. This is a game that looks like a lot of fun to play and if you want to check it out further take a look at Blaxkleric's first 7TV2e batrep here.