I have quite a lot of Berserker Walkers from the Zombicide: Prison Outbreak supplement to show, so let's start with this lot. These seven figures are all identical sculpts, which is why so many of them have been converted.

The four shown directly above and below are from the Prison Outbreak boxed set and have had the least amount of conversion work done to them. The two  Berserker Walkers at the far left have not been converted at all. It is only my paintwork that makes them different.

For the Berserker Walker second from the right, I added a baseball cap from one of the prison guards to his base. You can see it better in the first picture. The zombie at the far right has had his left hand chopped off, which wasn't an easy conversion as the hand was flush against his leg and required a bit of fiddly cutting to remove. 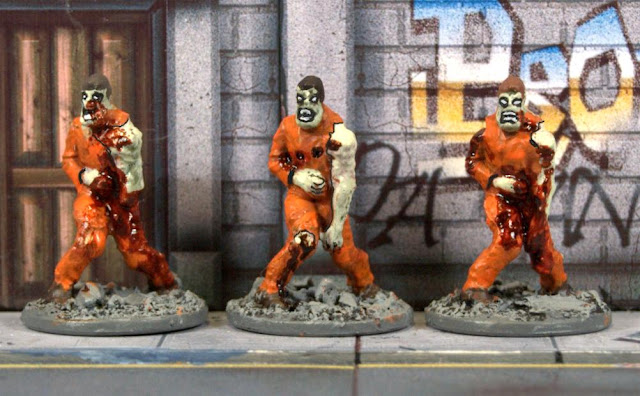 These three male Berserker Walkers came from the Angry Zombies: Box of Zombies set, which contains three new Berserker Zombie sculpts (a male Fatty, a male Walker and a female Walker). All three have been converted. The zombie at the far left has also had his left hand cut off but in addition, he has had a hole drilled into his neck (for a gunshot wound) and half of his face has been chewed off. The Berserker Walker in the centre of this trio has been shot with an assault rifle or sub machine gun across his chest as you can see by the row of bullet wounds I drilled into him. The Berserker Walker at the far right is holding onto his intestines to stop them from spilling out of a huge wound in his stomach. The intestines aren't that noticeable but I assure you they are there. I probably added too much Tamiya Clear Red to them!
More male Berserker Walkers next time including a few that aren't former prisoners.
Posted by Vampifan at 08:57