I have mentioned on my blog before that I am keen to get into Wild West skirmish gaming and to that end I already have the two Shadows of Brimstone (SoB) board-game starter sets and the THW Weird West rules supplement, High Moon, both of which I reviewed on my blog earlier. See here for SoB and here for High Moon. Obviously, I got a bunch of figures with the two SoB sets but what else do I have in the way of Weird or Wild West figures? The answer to that is loads of figures, but sadly most need re-basing and re-painting. They were bought many years ago. Some are over 40 years old! However, I have started to actively collect more modern manufactured miniatures, starting with these two sets from Ainsty Castings Weird West range, which I bought earlier this year.

These three figures shown directly above and below are from set WW01 The Good Guys 1 and consist of a gunfighter, a townsman and an Indian princess. The gunfighter is armed with twin Colt .45 revolvers and could just as easily be used as an outlaw. Indeed, Ainsty have named him as Billy the Kid, but I won't be using him as such. My preferred choice is as a generic gunfighter. I do wonder why Ainsty would class such a notorious outlaw as a "good guy?"

The townsman is named Abe on Ainsty's webstore, after Abraham Lincoln, whom students of the occult will know was secretly a vampire hunter! What? Have you never seen the film, Abraham Lincoln: Vampire Hunter? I'm more likely to use him as a townsman, possibly a doctor, which is why my version doesn't really look like the former U.S, president. He is armed with a hefty axe.
The title "Indian Princess" does not sit well with me. I see her more of a squaw, warrior or scout. SoB features an Indian Scout character as one of the heroes and provides a figure for the male version but not the female version. She'd fit that role admirably. She is armed with a hunting knife. 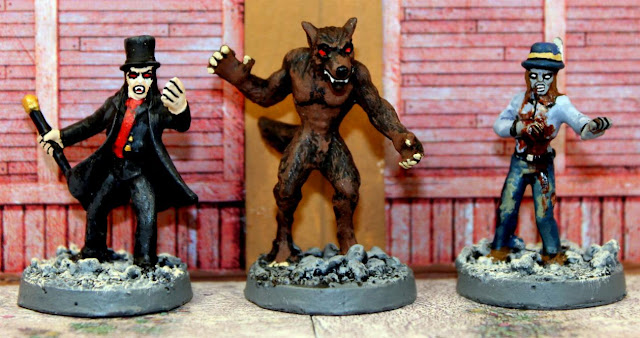 The next set, WW02 Bad Guys 1, shows why these are described as Weird West as opposed to Wild West figures. They contain a Victorian vampire, a werewolf and a zombie (mislabelled a mummy on Ainsty's webstore). Rules for all three types of villains appear in the High Moon supplement, making these a "must have" buy if you own this set of rules. 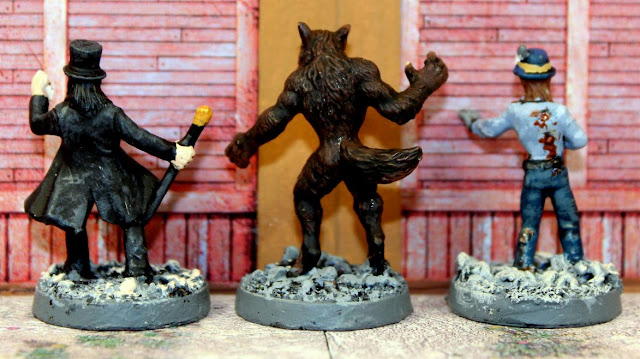 All six figures are very well sculpted and were a lot of fun to paint. I can use all of them in High Moon, but only the good guys and the zombie in SoB. Rules for vampires and werewolves in SoB don't exist for this game at the time of writing.
Sets WW01 and WW02 cost £7.50 each or you can do what I did and order set WW03 Good Guys and Bad Guys which contains both sets for the reduced price of £14.00, saving you a quid. Expect to see more Weird West and Wild West posts on my blog in the future.
Posted by Vampifan at 12:14