I respectively dedicate this post to my friend, Andy Nash, aka da Gobbo Grotto. It was thanks to his wonderful blog posts about the Teenage Mutant Ninja Turtles (TMNT), their friends and villains that inspired me to collect my own versions of these iconic characters from comics, film and TV. Andy and I both agree that the best 28mm scale figures of the four "heroes in a hard shell" are produced by Russian  company, My Way Miniatures. Their customer service is first rate.

From left to right are Donatello, Leonardo, Michelangelo and Raphael, all named after Renaissance artists by their rat sensei, Splinter. From their home in the sewers of New York, they battle petty criminals, evil overlords, mutated creatures and alien invaders whilst attempting to remain hidden from society. Note that these are all multi-part figures made of resin and are rather fiddly to glue together.
Donatello (or Donnie) is a scientist, inventor, engineer, and technological genius. He wears a purple mask and wields a bo staff. Donatello is perhaps the least violent turtle, preferring to use his knowledge to solve conflicts, but never hesitates to defend his brothers.
Leonardo (or Leo) is a tactical, courageous leader and devoted student of his sensei. He wears a blue mask and wields two katanas. As the most conscientious of the four, he often bears the burden of responsibility for his brothers, which commonly leads to conflict with Raphael.

Michelangelo (or Mikey) is the most stereotypical teenager of the team. He is a free-spirited, relaxed, and often goofy jokester and known for his love of pizza. Michelangelo wears an orange mask and wields a pair of nunchakus. He provides the comic relief, though he still has an adventurous side. The least mature of the four Turtles, he shows characteristics of a "surfer" type and is often depicted with a Southern Californian accent.
Raphael (or Raph) is the team's bad boy. He wears a dark red mask and wields a pair of sai. He is physically very strong, has an aggressive nature, and seldom hesitates to throw the first punch. He is often depicted with a very pronounced New York accent. His personality can be fierce and sarcastic, and often-times delivers deadpan humour. He is intensely loyal to his brothers and sensei. 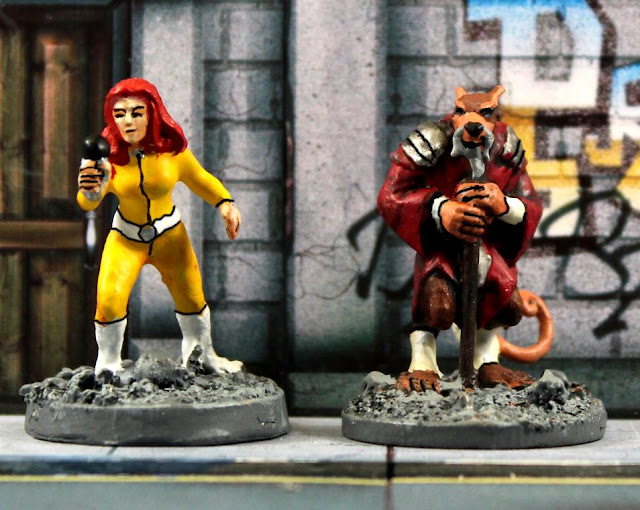 Next up are two very important characters in the TMNT world, April O'Neil and Splinter.
April O'Neil is a former lab assistant to the mad scientist Baxter Stockman and is the plucky human companion of the Turtles. April first met the Turtles when they saved her from Baxter's Mouser robots. She embarks on many of the Turtles' adventures and aids them by doing the work in public that the Turtles cannot. Originally, April was a television news reporter. Later, she and her friend and TMNT ally, Casey Jones, worked for a shipping firm. My version of April is clearly based on her role as a TV reporter. The figure is a conversion of the Crooked Dice Games second version of Pandora King. I snipped of her pistol and made it into a microphone. I also cut off the holster from her right hip. It was a very easy conversion. 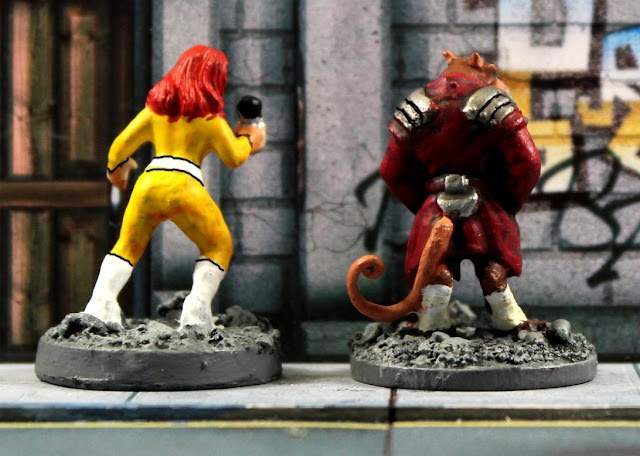 Splinter is the Turtles' sensei and adoptive father. He is a Japanese mutant rat who learned the ways of ninjutsu from his owner and master, Hamato Yoshi. Originally, Splinter was Hamato Yoshi mutated into a humanoid rat instead of being just Yoshi's pet. In the IDW comics, he is Hamato Yoshi reincarnated as a mutated rat. The figure I used for Splinter is by Mantic Games from their DreadBall set of three team trainers (the other two are human and dwarf). In DreadBall, he is a Veer-myn team coach. He is such a good match for Splinter that I didn't have to convert him at all.

Andy knows far more about the Teenage Mutant Ninja Turtles than I do and I recommend checking out his own post for the four hero Turtles here. He covers April and Splinter in this post here. Note that he has chosen different figures from me to represent both characters. Finally, in yet more praise for my esteemed blogger friend, he has created stats for the TMNT and friends to appear in the 7TV2e game, which is exactly what I want to use them for. Check out his 7TV2e stats for them here.

Finally, before I leave, I'd just like to point out these are the first photos I took with my brand new Canon EOS 1200D camera. It took me no time at all to get the hang of it and transferring the photos to my computer so I could edit them and show them on my blog was a doddle. I couldn't be happier with my new purchase and I look forward to many years of hassle-free photography.
Posted by Vampifan at 09:49