I have more UK-based policemen in helmets to show you and a small selection of Women Police Constables (WPCs). Once again, these are a mix of 28mm scale figures from Crooked Dice Games and Killer B Games. 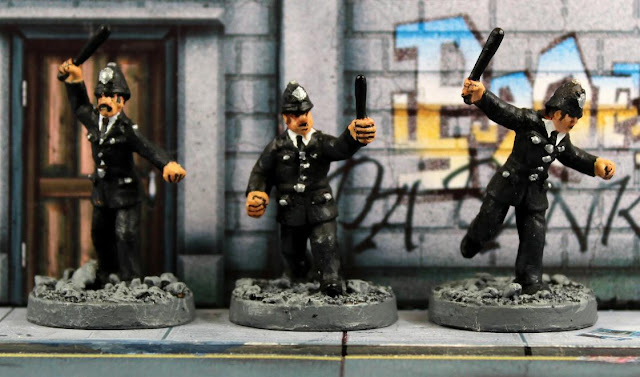 The three Police Constables shown directly above and below are from Crooked Dice Games' range of Heroes and Allies - Coppers sets 1 and 2. All are wielding their truncheons in an aggressive manner. The figure at the far left is from set 1 and is Copper with Truncheon. 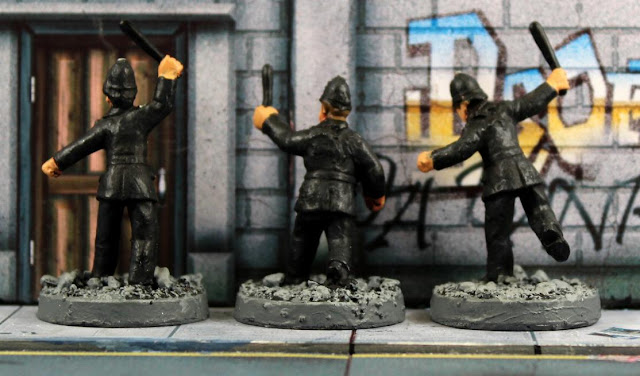 The other two figures are from Coppers set 2. The one in the centre is Copper Running and the one at far right is Copper Kicking. All three figures cost £3.25 each. As with the other CDG police constables I showed last time these come with separate helmeted heads, which you can replace with other heads from the CDG webstore. 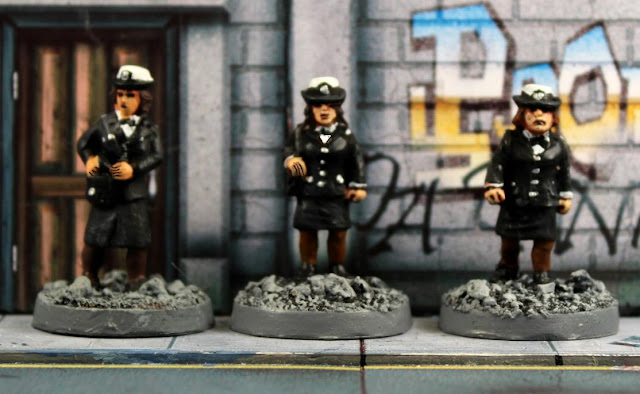 Next, are the Women Police Constables. At the far left is WPC Cathy Black, one of three figures found in CDG's Tough Detectives set. If you want to buy her individually, she costs £3.50. She is a one-piece casting. 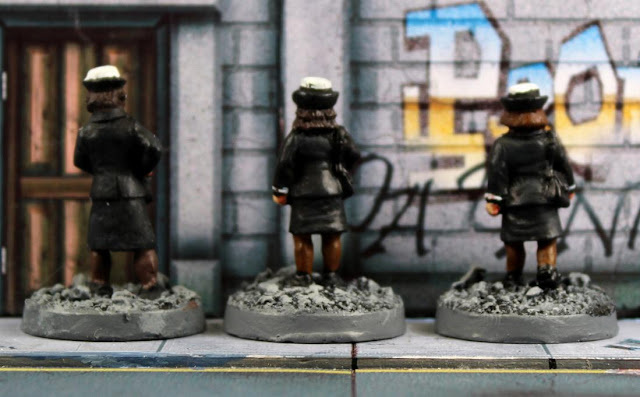 The other two WPCs are made by Killer B Games. In the centre is KB040 WPC Standing. I have named her Annie Cartwright as she looks remarkably like this character from the Life on Mars TV series. Annie was played by Liz White and she became the girlfriend of DS Sam Tyler. Annie was far more intelligent than she was given credit for by her male colleagues. Only Sam saw her true potential and it was he who helped her gain eventual promotion to Detective Constable.
At the far right is KB041 WPC Walking, whom I have named Juliet "Bravo" Bartley. She gained her nickname from the 1980's TV series, Juliet Bravo, a cop drama that starred Stephanie Turner in series 1 to 3 and Anna Carteret in series 4 to 6. Note that Juliet Bravo was not a character but a radio call sign for the Police Inspector played by the two leading actresses.
I'm sure that CDG's Cathy Black was meant to represent Annie Cartwright but I think the Killer B Games version is a much better likeness. The two Killer B Games WPCs cost £2.00 each.
Posted by Vampifan at 08:30