As promised here is part 2 of my posts reviewing some of the 1970's style civilians from Killer B Games. This time I'm looking at three young males and three females, only one of whom has been named. 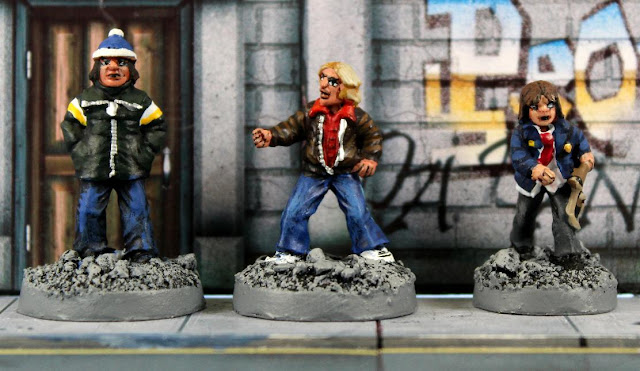 First in line is KB038 Geezer in Bobble Hat. You don't see many bobble hats these days, do you? If you wanted a more contemporary version of him, simply cut the bobble off and you have a beanie hat. Simple! He is a very average looking young male, useful for filling in a crowd. On a more sinister level he'd make a useful lookout for a criminal gang.
In the centre of this trio of males is KB035 Young Geezer, either a teenager or someone in his early twenties. I used this figure to convert into an alternative version of DC Chris Skelton from Life on Mars (see here ). Once again, I don't have much to say about this rather plain looking figure. Moving down in age, I come to KB055 Schoolboy with Catapult. Do school kids today still use catapults? I thought they were more into knives. Anyway, this lad is from the 1970's, so a very different world to today. You can tell he's a troublemaker with his long hair and shirt not tucked in and tie undone. Plus, of course, the catapult. He is certainly the most characterful figure of the three. 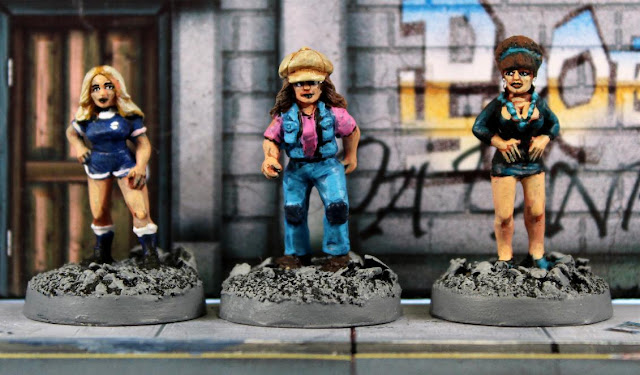 Far more interesting, however, are these three adult females. At the far left is KB064 Sporty Bird. Note that women are called "birds" and men are called "geezers." On the Killer B Games website she was painted with dark brown hair but I changed her to a blonde. She is dressed in her football strip, hence the "sporty" connection. She has beautiful eyes and a very pretty face. She is definitely one of my better paint jobs.
Next up is KB056 Lively Bird, possibly a resident of Carnaby Street, London or at least a fashion shopper there. I think it's a safe bet to say she'll be a keen dancer at her local discotheque. I'd like her a lot more if she ditched that ridiculous hat, although it is very 1970's. 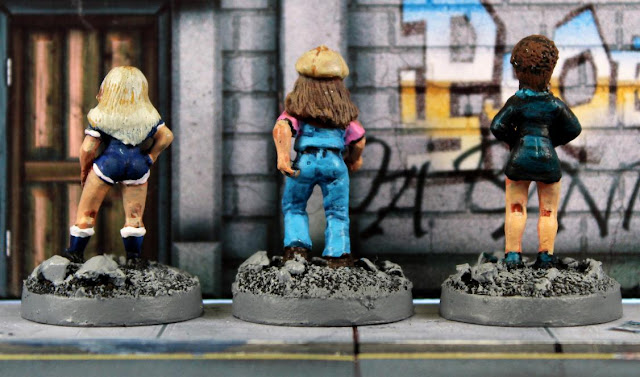 I bring to an end my review with the only named character from this batch, KB059 Brenda Bristols. No, that is not the name I gave her. It is the name given to her by Killer B Games. To me, she sounds like a character from a Carry On film. She is very striking with her good looks, spectacular cleavage, long legs, micro-skirt and turquoise jewellery. Once again, I do like her eyes. I'd guess her most likely profession to be a barmaid.
All of these figures fit the bill as Neutral Bystander Extras if used in 7TV2e or as ordinary civilians in other games. In my opinion, they are amongst the better sculpted civilians on the market. Each one costs a lowly £2.00 from the Killer B Games webstore. As I always say, civilians are like zombies - you can never have too many of them!
Posted by Vampifan at 09:40