Another month and another Joe Jusko painting of Vampirella to start my Monthly Musings post. Those of you with good memories may recognise this painting. This is the image used on my life-sized cardboard cut-out of Vampirella that I showed last year. See here.
Of course, with this painting you get to see the complete picture. This is one of my favourite Joe Jusko paintings. It also appears on my 2016 Vampirella calendar that I have hanging next to my computer.

In my hobby news I have got back into Heroclix and Horrorclix in a big way. I played these games a hell of a lot in the early 2000's when they first came out and I collected hundreds of figures for them. When my gaming group broke up, I put them all back on the shelves and pretty much forgot about them. Earlier this month, Steve and Hil, my fellow editors of the All Things Dungeon Crawl blog asked if I had any spare Heroclix or Horrorclix figures lying around as they fancied getting back into both games - Steve with Heroclix and Hil with Horrorclix? Imagine their surprise when I told them that I had loads of figures spare and they could have them all. Hell, they were no good to me; they were just gathering dust. They wanted them, so they got them and now they have a very impressive collection of clix figures for both games. As a result of their enthusiasm I have rediscovered my own love of both games, Now I'm playing solo games and actively looking for new figures. I bought a few new starter sets this month - Captain America: Civil War, Fantastic Four and Teenage Mutant Ninja Turtles, partly for the new figures but also for the rules, as I wanted to know how much the 2016 rules had changed from the original 2002 rules that I was so familiar with. The answer to my surprise, was surprisingly little. A few tweaks here and a few additions there but essentially, they were exactly the same. This was good. The game was just as I remembered, so I had no problem in getting back into it. 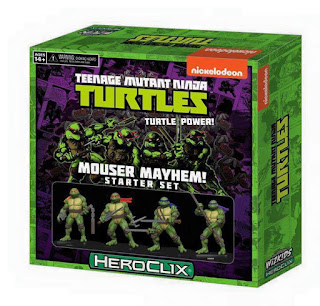 When it comes to collecting Heroclix figures or any other kind of clix figures there are basically two schools of thought - keep the figures intact on their bases or remove the figures from their bases to rebase and use in other games. What kind of collector am I? The answer is both. I do cut figures from their clix bases but only if the figure is a swap. Any clix figure that I only have one of, remains a clix figure. This means that I have very few rare, unique and limited edition figures that are rebased because they are much harder to come by. As far as the clix games go I have a massive collection of Marvel, DC and Indy superheroes and villains and almost as many figures for Horrorclix and its three expansion sets. I may do some figure reviews of figures from my collection in the future but I'll leave any other Heroclix/Horrorclix articles or batreps to Steve and Hil to publish on the ATDC blog. You can see the first of their Heroclix/Horrorclix posts here - http://thegamerscupbard.blogspot.co.uk/2016/05/by-hilary-gilbert-may-2016-thefirst.html
Note the new address!

Other than those three Heroclix sets I mentioned I haven't bought anything else hobby-related this month. On my painting table at the moment are a batch of Zombicide: Black Plague zombies. I only have a few left to paint to finish them all. I am hoping I can get them all finished before I receive my huge parcel of Black Plague expansion sets, which are due very soon. You can expect a lot of Black Plague posts appearing on my blog over the next few months.

My other hobby news is that I am just starting work on Jez/Carrion Crow's Forgotten Heroes project, which is due to launch in June. I'll have a few figures to show for that, so keep an eye open for my entries next month. As for what's coming next on the Vampifan blog, fans of the Teenage Mutant Ninja Turtles should rejoice. I have my TMNT allies and villains to review.
Posted by Vampifan at 10:19