I'm reviewing two Enemy Packs for the Shadows of Brimstone game today and both are related. I present to you the Custodians of Targa and the Guardian of Targa. These constructs obviously come from the other world known as the Targa Plateau.

Ancient caretakers from the Targa Plateau, these large spider-like robots roam the halls and chambers of the ancient alien city, maintaining the systems and repairing damage done by intruders and the rigours of time. On occasion the Custodians of Targa will stray through a portal and begin terraforming whatever world they end up in, building new pylons and converting the area into a remote extension of Targa itself. The Custodians of Targa are a dangerous enemy to fight, as they not only have a powerful Electro-shock if you get too close, but also a Defence Laser that they blast away with as they close in for melee. The primary function of a Custodian is its Repair protocols, allowing them to repair damage to themselves and other robots and pylons nearby. This makes them extra difficult to defeat in groups.

These three models are just slightly bigger than the Void Spiders I showed recently - roughly 18mm tall. They are two-piece castings, with the heads being separate from the bodies and limbs. They are not supplied with bases and I chose not to glue them to a base. All three Custodians are identical but with the one at the far left I slightly bent his legs to make him appear taller. I also glued their heads on slightly differently so that they are not all facing directly forward. 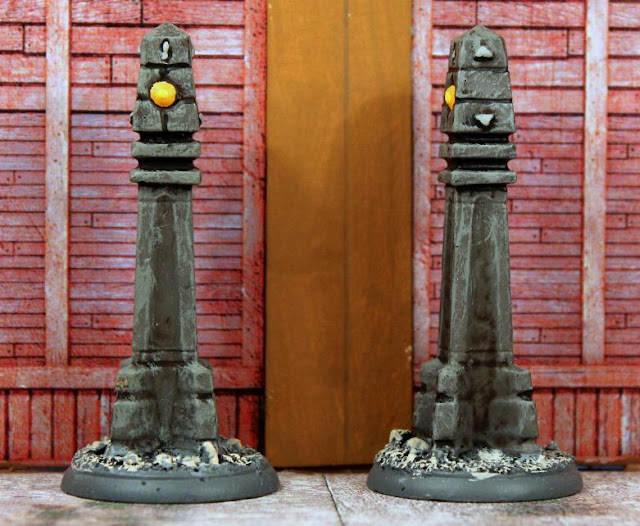 Throughout the city of the Ancients on the Targa Plateau, stand a series of tall, Dark Stone Pylons. Re-activated after countless aeons as a defensive measure, these Pylons power up with a low hum of energy resonating through their master-crafted stonework. Atop each Pylon is a laser eye, ready to fire searing blasts of super-heated plasma at any invaders or unwelcome guests of the city. Though Targa Pylons are immobile, they have the ability to fire their defensive lasers in all directions. This makes them difficult to approach and virtually impossible to sneak up on. Frequently found in pairs, these Pylons stand as silent sentries left behind to watch over the once great city.
These simple sculpts came in two halves, cut diagonally down the column. They stand 60mm tall and have been glued to 30mm diameter bases. They were without any doubt, the easiest figures I have had to paint for Shadows of Brimstone. Their main colour is Foundry Granite 31. 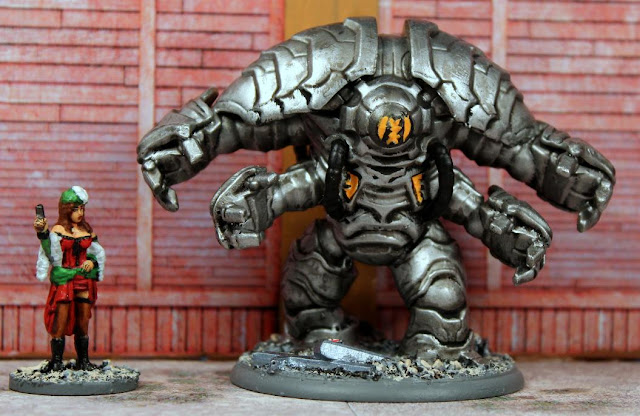 The frozen over alien city of the Targa Plateau is home to many ancient terrors that have lain dormant for aeons. While the robotic Custodians of this long gone civilisation still roam the halls, maintaining the systems, there are also massive robotic Guardians that are awakened when the city is in danger. these mechanical monstrosities pull free from their alcoves to hunt down and eliminate whatever threat was detected. Easily standing three or four times the height of a man, these Guardians are cold and calculating in the execution of their duties to defend the city against all intruders. Many explorers have found their way to the Targa Plateau... far fewer have returned. The Guardian of Targa is a gigantic and terrifying construction. Its Hardened Shell has withstood the ages and can easily withstand simple gunfire. With four crushing arms, the Guardian smashes his foes, rocking the very foundation he stands upon. Though mainly a melee fighter, the Guardian also has a Burning Laser it fires from its lifeless eye at the start of each of its Activations. Though difficult to destroy, the Guardian can have its Control Systems damaged as it takes Wounds, reducing its effectiveness as more and more of its systems shut down and its arms go dead. 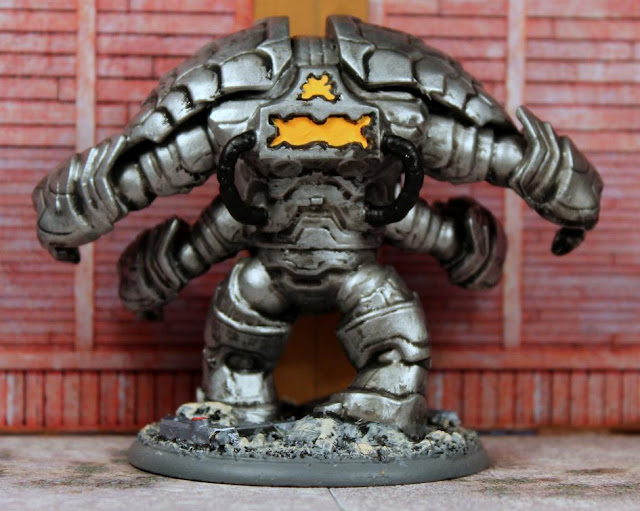 The Guardian is a multi-part model comprising 25 separate components, which includes its 60mm diameter base. Fortunately, detailed instructions on how to assemble the robot are provided. Because the arms are attached to the body by ball and socket joints, you have a fair degree of flexibility in how to position them. Both the Custodians and the Guardian were very easy models to paint. Note that I added some cut-offs from the model's sprue to add to its base, which I painted in light metallic blue. I added the Saloon Girl to my first photo of the Guardian to give you an idea of how tall he is. He actually stands 70mm tall. He is one incredibly impressive model.

I end with a group shot showing the figures from both sets together. I must admit that I am toying with the idea of using them in my upcoming Judge Dredd Miniatures Game campaign. They certainly wouldn't look out of place there.
Posted by Vampifan at 10:31