The first Deluxe Enemy Pack that I bought for Shadows of Brimstone was the Masters of the Void set, which contained plastic 30mm scale figures of three Void Hounds and three Void Sorcerers, along with a deck of cards, which includes new Artefacts, Encounters, Threat cards and a new card deck - Void Magik.

In the Void between worlds, outside of space and time, eldritch horrors beyond fear or imagination reside. These ancient beings come in many forms, from malign entities of hate and rage, to writhing masses of tentacles, to fiendish sorcerers, locked in towers of knowledge and madness. These masters of the Void extend their tendrils of influence through the cracks in reality that bridge countless worlds across existence! Of all these dreaded beings, Void Hounds and Void Sorcerers are some of the most frightening. Void Hounds are beastly creatures that stalk their prey from beyond the veil, hunting in packs and phasing through the barriers of reality to strike.

The Void Hounds were cast in two halves and come in two poses. the Void Hounds at the left and right of my photos are the same sculpt, but I slightly altered the pose of the tails on the one at the right. They are glued onto 30mm diameter bases and are roughly the same size as a similarly scaled horse. Savage beasts, Void Hounds lay in wait within the Void, choosing just the right time to strike! Attacking as a pack, Void Hounds phase in and out of reality as they move. This results in them having a variable Defence value that is equal to the current initiative Level in that turn order. For example, if a Saloon Girl that Activates at Initiative 5 attacks a Void Hound, the Void Hound's Defence counts as 5 for those attacks. Void Hounds are not generally immune to Critical Hits though, which can bypass the effectiveness of their Void Phasing, by hitting them at just the right moment. 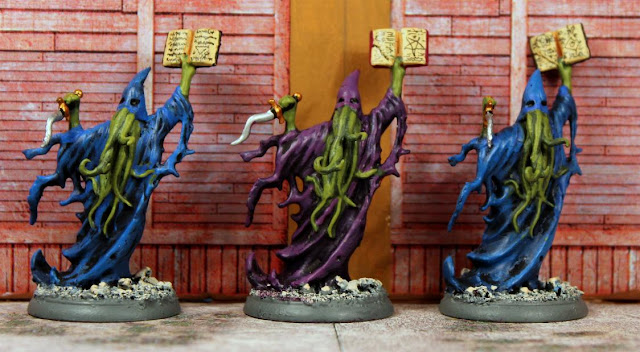 Void Sorcerers are nefarious mages that use dark and powerful magik, seeking out occult knowledge and collecting arcane tomes and artefacts to add to their vaunted vaults of Valitore. To fight these fiends is to stare into the abyss. These ancient and dreaded sorcerers prefer to fight at a distance, slinging Void Bolts at their opponents and ominously chanting in alien tongues as they cast their foul spells. Their powerful magik both protects them and allows them to rain down destruction on their foes. 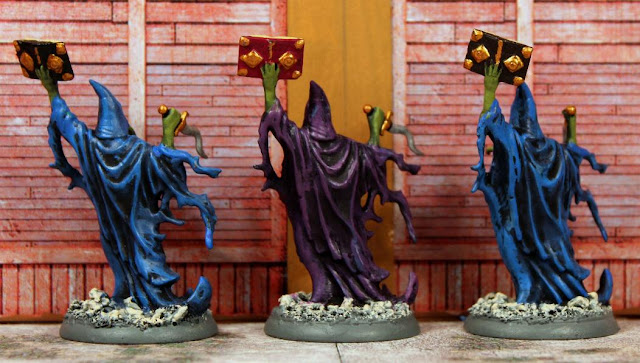 These figures were also two part castings, with the heads being a separate part. They stand 42mm tall and come with 30mm diameter bases. All three are identically sculpted but I have slightly repositioned the arms of the two blue-robed Void Sorcerers. I painted one of them differently, in the purple robes, so I could use him as a more powerful Void Magus, who can appear as an Epic Threat, with enhanced stats and abilities.
It has been noted that some of the monsters from this game would fit in well in a Call of the Cthulhu setting. This is certainly the case with these Void monsters. With their tentacled faces, the Void Sorcerers could stand in for Avatars of Cthulhu, and the Void Hounds with their ability to phase in and out of reality remind me of the Hounds of Tindalos.
Posted by Vampifan at 09:50