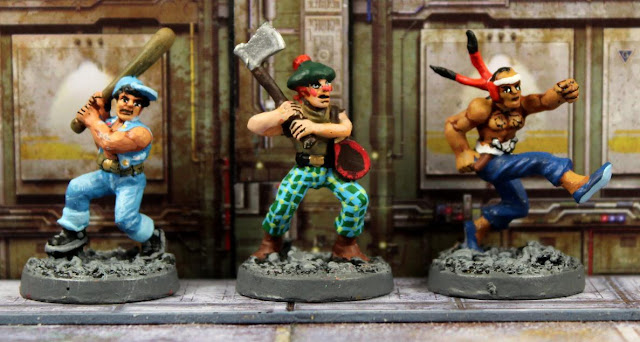 Fergee was first introduced in prog 100 of the 2000AD comic in the epic The Day the Law Died story. A resident of the Undercity, he proclaimed himself to be "King of the Big Smelly" (the Ohio River). He became a hero of Mega City One when he joined forces with Judge Dredd to defeat the mad tyrant, Chief Judge Cal. He proved fearless, even when capturing a patrol-wagon or going up against Kleggs in hand-to-hand combat. Dredd appointed him honorary Judge status. Fergee enjoyed his new position and took his responsibilities more seriously than even Dredd could have dared hope during the final battle to depose Cal. Despite two bullet wounds in his chest, when the mad Chief Judge tried to press the fatal button which would gas the entire city, Fergee charged into him and carried him off the top of the Statue of Judgement. He fell to his death along with Cal, but Judge Dredd ensured that Fergee's sacrifice would always be remembered in Mega-City One by erecting commemorative statues of him all over the city. His catchphrase and battle cry was, "Easy the Ferg!" In JDMG, Fergee is a Level:4 Infantry Hero armed with a Large Club. He has the following five Talents - Below the Belt, Brave, Careless Charge, Dirty Fighting and Thundering Charge. He costs 155 Credits.
Kenny Who? was a comic artist from CalHab (Scotland), who was arrested by Dredd for assaulting comics editors who programmed a robot to imitate his style, without paying him. He first appeared in a 1986 story written as a satire on the then policy of British comics of not paying royalties to artists and writers. After this policy was ended, he appeared in two comedy sequels. In his final appearance, he created a trashzine hero called The Hoolie who fought the corrupt Judges led by Judge Dread; unable to find a publisher, he turned to self-publishing and the trashzine became a massive hit. This led to him being arrested for defamation of the Judges and defended in an appeal by Public Defender 314; his conviction was overturned on technicalities, and he returned home to CalHab in triumph.
The question mark was part of his surname, which was a running joke each time someone asked him what his name was, when people would become confused and rephrase the question. In JDMG, Kenny is a Level:1 Infantry Hero armed with an Axe. His two starting Talents are Careless Charge and Dirty Fighting. He costs 80 Credits. 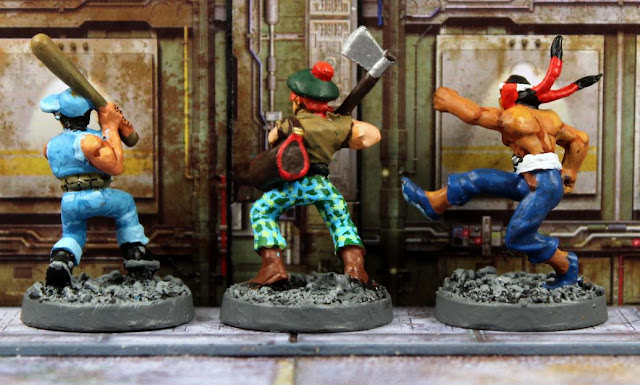 Far and away the deadliest of this trio is Stan Lee, also known as Deathfist. Lee is an expert in martial arts, hailing from the Radlands of Ji in China and trained by the outlaw Fighting Heart Kwoon, and a deadly assassin. One of the very few people to ever defeat Dredd in single combat, (on his first encounter he easily left him lying unconscious on the street) Dredd has since defeated him twice. He was given a life sentence for murder. Some time later, a female assassin from the same Order named Wu Wang attacked Dredd for the honour of their Order.
In the Shimura story The Harder They Come, it was revealed that Shimura had faced Lee back when he was a Judge-Cadet; all the senior Judges present were killed as were the civilians they were guarding, and Shimura was badly wounded and given his distinctive facial scaring by the assassin. In 2127, Lee escaped - deliberately injuring Judge Giant in the process - thanks to the Fighting Heart Kwoon. The Radlands were under threat by the Taoka Corporation's terraforming of the area back into habitable land; Lee was made leader of a group composed of the best warriors of the Radland factions and sent to Hondo to assassinate Amber Taoka. His group were wiped out and he was defeated in a rematch against Shimura, who cut off his left hand: "Deathfist? Better find yourself a new name."
Lee also has a daughter called Yin Mie, introduced in Tempest: Time Zero. She arrived in Mega-City One with the intention of freeing her father and, using their mutual abilities, destroying the universe via a time rip in the Undercity. Lee, meanwhile, had used his imprisonment to meditate and learn to use the force known as "black chi", which gave him supernatural powers and a reformed arm at the cost of making him far more depraved. However, the supervillain Tempest managed to push him into the time rip, sending him back to the dawn of time - in anger, Lee struck out and caused the Big Bang utterly annihilating him, but causing the creation of the universe.
Lee shares his last name with martial artist/actor Bruce Lee, and his full name with Marvel comic author and editor Stan Lee.
In JDMG Stan Lee is a formidable Level:12 Infantry Hero with the following array of Talents - Agile, Black Belt Martial Artist, Brave, Call Me Master, Combat Awareness, Dance of Death, Duck and Weave, Infiltrator, Light Foot, Martial Artist, Silent Action, Silent Killer and Stealthy. He costs 370 Credits.
All three figures are decent sculpts but I'm not sure if any of them will appear in my campaign. Maybe I could give them different names and find a use for them. I dunno.
Posted by Vampifan at 09:38