I continue my reviews of Mercenaries who can be used in the Judge Dredd Miniatures Game. Of the three that I am showing here, only Rico Dredd has appeared in the Judge Dredd stories in 2000AD comic. The other two are characters I have created to use in my current campaign. All three were produced by Warlord Games. 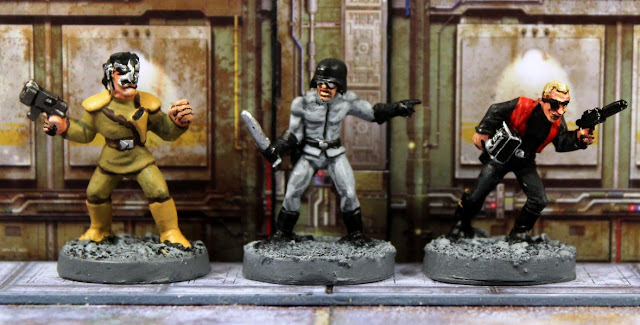 At the far left is Rico Dredd, the clone brother of Judge Joseph Dredd, which is to say they were both cloned from the same genetic source, in their case Chief Judge Fargo. Rico was a superb Judge - he came top of his class in 2079, narrowly beating Joe, who came second. However, Rico had a bad streak in him that caused him to fall  from grace. He got involved in criminal activities, including extortion, assault and racketeering. When Joe witnessed Rico murder an innocent cafe owner who had refused to pay him protection money, Joe arrested him. Rico resisted arrest by opening fire, but the shots went wide. Given Rico's skill with a firearm, Joe would later posit the theory that Rico was trying to commit suicide by cop out of a deep disgust at what he had become, rather than trying to kill him. Whatever his motive, Rico was sentenced to twenty years hard labour on the prison colony of Titan, the largest moon of Saturn, where he grew to hate his brother. He was particularly angry that Joe didn't testify in his favour. After serving his time on Titan, Rico returned to Mega City One seeking revenge on Joe. Confronting him at his home, Rico challenged him to a duel to settle their differences, knowing that with his superior skills he could always outdraw his brother. However he had grown used to the weaker gravity of Titan after his twenty years there. This slowed him down by a split second and allowed Joe to shoot him dead. Carrying his brother's lifeless body out into the street, Joe declined a paramedic's offer of assistance, allowing the writer, Pat Mills, to conclude the story with a line from the Hollies song, "he ain't heavy - he's my brother!" Long after Rico's death, Joe would be haunted by his memory and Rico appeared to him in a number of flashbacks.
In JDMG, Rico is a powerful Level:9 Infantry Hero equipped with Bionic Lungs and armed with a Cursed Earth Eagle Pistol. His following 10 Talents are - Academy Star, Accurate, Close Combat Shooter, Crackshot, Crippling Fire, Dirty Fighting, Leg Shot, Pistol Whip, Rapid Fire and Situational Awareness. He costs 345 Credits. It is unlikely that I will use Rico in my campaign but I may well use the figure as another former Titan inmate with the same stats. 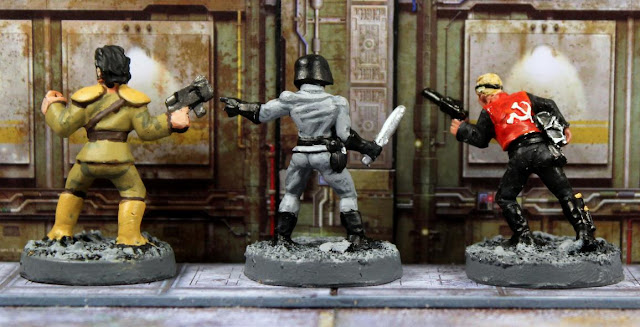 In the centre of this group is Willi Braun, aka the Sector 13 Slasher. Warlord Games sold him as a Juve with Club, but I decided to upgrade him to a Punk and make him a named character. Braun is a psychopath who murders his victims with a Las-Knife. He is a loner, but as a Punk Mercenary, he could be hired by a number of forces. I made him a Level:3 Punk Infantry Hero. His only weapon is his Las-Knife and he carries no other equipment or armour. His four Talents are - Skilled and Deadly, Smack-down, Stealthy and This is my Las-Knife. He costs 125 Credits. I thought the figure was far too good to relegate to generic Juve status, even though that is what Warlord Games marketed him as.
At the far right is Oleg "Ollie" Zhirkov, an East Meg Agent and Spy. East Meg Agents are highly motivated individuals, exceptionally well-trained, who will stop at nothing to complete their assigned missions. Be it assassination, sabotage or espionage, there is no one better than a good agent. Ollie is a Level:3 Illegal Infantry Hero, armed with a Knife and Handgun Pistol. I gave him the following four Talents - Accurate, Silent Action, Silent Killer and Stealthy. He also has the following Special Rule - Super Secret Agent Man, which grants him the Infiltrator Talent for free. He costs 145 Credits. One thing that bothers me about this figure is the waistcoat he is wearing has the hammer and sickle logo of Russia on its back. Would an East Meg Spy really wear that if working undercover? Or perhaps it is a double bluff?
Posted by Vampifan at 07:35