In these past couple of months I have more than doubled the amount of robots I have for my Judge Dredd Miniatures Game campaign, as I have dug deep into my collection of 28mm scale sci-fi figures to increase their numbers. I'll be reviewing them in this and the next post. In this post I'm looking at Servo-droids, Robo-docs and a unique Combat droid.

First up are a pair of very old and long out of production Grenadier Servo-droids. This robot was part of a boxed set of 20 Gamma World figures. I bought two boxed sets, which is how I have ended up with two of them. The robot was a two-piece casting with his two left arms (cast as one piece) being separate from the rest of the figure. As such, I was able to glue them on in different positions to give them some variety in their poses. These servo-droids have four arms, two with normal hands and two with specialist attachments - a hoover nozzle and a large sucker contraption. These are fantastic sculpts from the 1980's and are as good as, if not better, than many contemporary designs.

In the centre of the group is another very old figure, bought in the early 1980's. I have no idea who produced him, other than it was an American company. He has only recently been repainted and rebased. To me, he looks like a typical butler, which would certainly tie in with him being a Servo-droid. He's probably called Jarvis or Jeeves or something similar.
At the far left are two more ancient figures, who were also bought in the very early 1980's. These were made by Irregular Miniatures, who are still going today, but these are no longer in their catalogue, as far as I can tell. They too, have been recently repainted and rebased. I see them as little maid robots, programmed for domestic duties. They are average sculpts but look a lot better with their new paint schemes. Irregular Miniatures are renowned for their inferior sculpts, but their figures are extremely cheap. 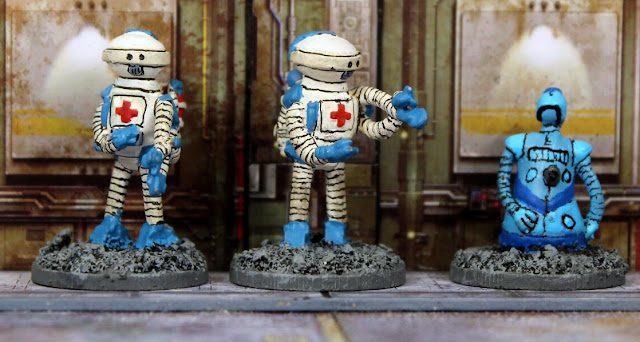 Moving on, we have a pair of Robo-docs. These are very similar in design to the Grenadier Servo-droids shown above, which is hardly surprising as they are from the same boxed set of Gamma World figures. These also came with separate left arms. There are a few slight differences with the Servo-droids - back packs and hand attachments, but they are, essentially, the same design. I think these are far better than the official Robo-doc that Warlord Games made for JDMG. 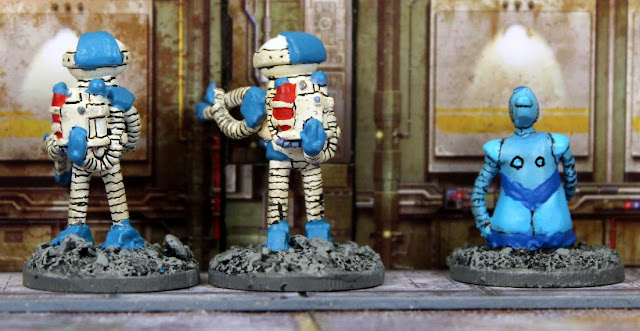 Finally, we have my unique combat droid. He is unique because he was sculpted by me. His name is Chunky, and he is based on a robot character from a Stainless Steel Rat story that appeared in the 2000 AD comic many years ago. The strip was drawn by Carlos Ezquerra and just looking at Chunky, he has the feel of a Carlos creation. In the story, Chunky was bristling with weapons, which were all hidden away behind panels in his body. He was very polite but also had a sarcastic sense of humour. Jimi DiGriz had a tough time defeating him. Chunky clearly made a huge impression on me, because I wanted to make a figure of him as soon as the story ended. In common with the other robots shown here, he was made in the 1980's. I once used Chunky in a GURPS Space Opera campaign as the guardian of a lost Forerunner site and his points total was a staggering 2500 points. He was designed as a party killer... but my PCs defeated him! How they did it is a story for another time.
Posted by Vampifan at 08:26