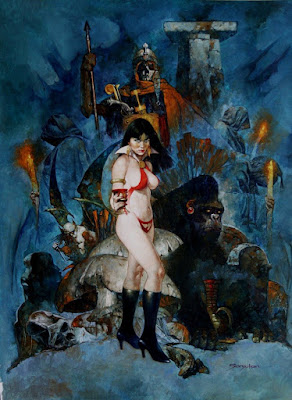 July has been a very good month for me, more of which later. I start with another illustration of Vampirella by Manuel Sanjulian. There's a lot going on in this picture and I like it a lot.

I received a couple of big parcels this month, both of which pleased me immensely. First up was all of the figures I'd ordered from Bad Squiddo Games (BSG) for their Ghosts of Gaia 2 Kickstarter project. I missed out on the first Ghosts of Gaia Kickstarter but Annie kindly offered the figures from that set as a stretch goal for this later Kickstarter. This Kickstarter was launched last year but delivery was delayed for many months. This did not bother me at all because Annie Norman, who runs BSG, kept her backers well informed about the reasons for the delay, which was much appreciated. Communication is so important and made me much more understanding towards her problems. Illness, moving house and moving business were all reasonable causes for the long delay. I have dealt with BSG before and have always had great service from them and Annie is a true star. The Ghosts of Gaia figures are all females, which is something BSG specialises in. I've already painted a few of them. Reviews of this range of figures will appear on my WOIN blog due to them being sci-fi themed and very apt for inclusion in my The Ace of Spades Campaign.

The other big parcel I received came from Warlord Games and it was the Strontium Dog Collection 1, which included everything that was produced for this brand new sci-fi skirmish game based on the series of stories from the 2000AD comic, starring Search/Destroy Agent, Johnny Alpha. 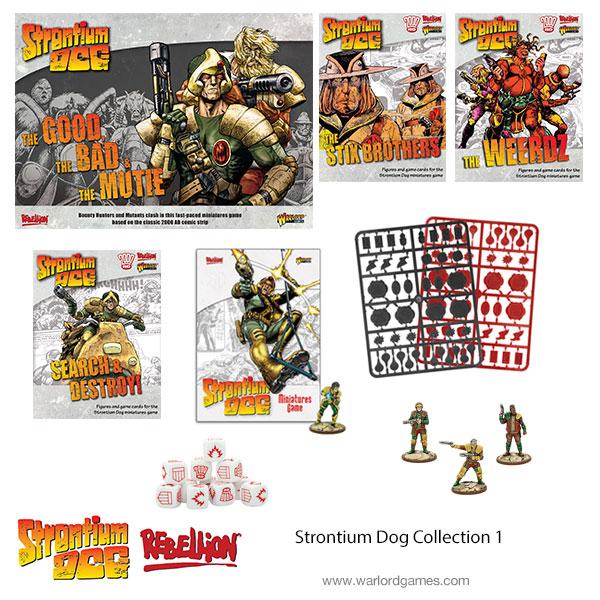 I've been collecting 2000AD ever since its first prog and the Strontium Dogs stories have always been a favourite of mine, so therefore this game and range of figures was a must have buy for me. I'll say now that I was not disappointed. The figures are very well sculpted (apart from Wulf Sternhammer who has a very badly sculpted and positioned right arm). The rules are easy to understand and fit in so well with the theme of the game. I won't go through the rule mechanics here but look out for my first Strontium Dog batrep which will appear very soon. I'll explain the rules then. I'm in the fortunate position of owning all of the old Wargames Foundry and Heroclix Indyclix Strontium Dog figures (all painted) and my Battle Systems Shanty Town and Sci-fi Terrain sets are just tailor-made for this game. So using them, I'm able to run a game very soon. My first game will feature Johnny Alpha, Wulf Sternhammer and Durham Red going up against five (yes, five!) Stix Brothers. That works out at 50 Notoriety Points per side, which is the recommended total for starter games.
If you fancy dipping your toes into this game you can buy the rulebook, dice, tokens and figures separately. The Good, The Bad & The Mutie is a better option, as it gives you the 112 page rulebook, a 12 page scenario supplement, 8 metal 32mm scale miniatures, 2 sprues of plastic tokens (red and black), 36 game cards, 6 character cards, a laser-cut MDF solar farm, 2 six-sided dice and 8 2000AD dice, all for £50.00, which is pretty good value for money, especially as some of the items like the cards and solar farm, are only available in this set. I went for the all-in option, simply because I wanted everything. So I got extra dice and counters and 12 more miniatures.
Warlord Games already have the second wave of figures previewed for this game up on their website, which you can pre-order now. Delivery is expected in mid-August. I was most pleased to see that Durham Red is included in the second wave as she is my all-time favourite 2000AD character. Judge Dredd comes second. Once again, I'll be ordering everything including two boxes of the Build-a-Mutie sets, so I can make use of all of the components in these sets.
You can probably tell that I'm very excited by this game. I don't do themed months on my blog, unlike some other bloggers (Blaxkleric :-)) but I can say that August will definitely be Strontium Dog month. One thing that struck me when I was reading the rulebook is that it could potentially work for other 2000AD stories. It would certainly work well for small-scale skirmish games of Judge Dredd, Rogue Trooper, ABC Warriors and Bad Company. I know that Warlord Games hold the licence to produce games for all of the 2000AD stories, so it could happen, especially if Strontium Dog is a big success... and I see no reason why it shouldn't be.

Obviously the main focus of my figure painting for August will be getting the Warlord Games Strontium Dog figures completed. The three Stix Brothers are already finished and I'm about half way through the rest of them. I've made and painted five of the seven items for the solar farm - the watch tower (which I've converted) and the four solar panels. Oh, and I'm also painting all of the counters. Work will continue on my Wild West figures and sci-fi figures.  I've made good progress with the painting of my Black Scorpion Tombstone figures and now have their complete set of figures for this range. Yay! Earlier this month, I received the second supplement for Dracula's America, called Forbidden Powers, along with all of the new figures designed specifically for it - three new factions.

Finally, I want to mention something that has made me VERY happy this past month and that is the TV series of The Vampire Diaries. With the excessive and over the top coverage of sporting borefests like the World Cup and Wimbledon I needed something I could watch and enjoy on a daily basis on television. Now I have been interested in buying The Vampire Diaries series ever since it first aired in 2006, but I kept holding back because I wanted to wait until the series ended so I could buy all of the series in one boxed set and watch every episode back to back. In addition, I didn't want to buy the complete series boxed set as soon as it was released because I've found if you wait a year or so the price drops considerably. So once the boring football began I ordered the eight series complete boxed set of Blu-ray DVDs for about £60.00 from Amazon UK. With each series running to 22 episodes (although series 8 is only 16 episodes long), plus loads of extras and special features that is a hell of a lot of viewing. So far, I have seen the first three series and I was hooked after episode 1. Series 1 was very good. Series 2, however, was just amazing and series 3 has maintained the same high standards. This is a series which improves with each successive episode. As you'd expect with a name like Vampifan, I love anything to do with vampires and this series is so addictive, it ranks alongside Angel and Buffy the Vampire Slayer as my favourite vampire shows. Indeed, it could end up being my favourite TV series of all time. I am hooked on it and I couldn't be happier!
Posted by Vampifan at 09:59