Even though the Zomtober and Zomvember challenges are over, I'm still painting stuff from The Walking Dead game by Mantic Games. Having painted all of the wave 1 figures I next turned my attention to the scenery items that are supplied with the boxed starter set. In it you get 3D models of barricades, objective pieces and vehicles to replace the card counters that also come in the set. I have painted all of the barricades and objective tokens and I'll be showing them here. I've yet to start painting the four vehicles but they are high up on my "to do" list.

You get six barricades with two of each design. The front of the barricades are shown to the left of Deputy Sheriff Rick Grimes, whom I have included for scale purposes. This barricade is made up of  a wooden wall supported by five wooden crates.

The next barricade is made up of four sheets of metal panels resting against piles of breeze bricks and tyres.

The third type of barricade is made of two metal fences resting against wooden planks and a couple of traffic cones. 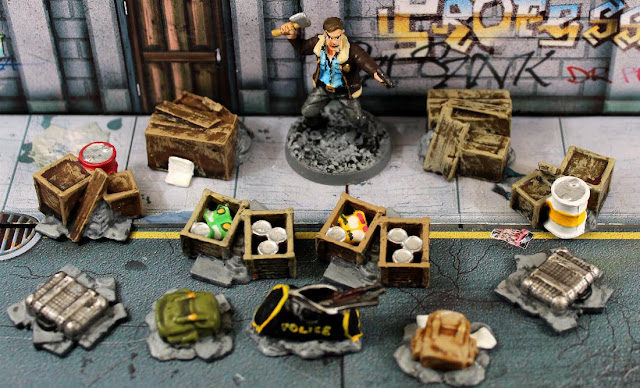 This photo above shows the various objective items. There are five basic designs of which you get two of each of them - wooden crates, metal cans, suitcases and backpacks. In addition, is one special objective - the bag of guns that Rick grabs from his old police station. This is used in a couple of scenarios as the main objective that must be found.
Although designed specifically for The Walking Dead, they are all generic enough to be used in any contemporary or near future games. They are very useful items and far better than the card counters they are meant to replace.
Posted by Vampifan at 15:35