I have been busy painting the wave 3 release figures for the Strontium Dog skirmish game by Warlord Games. These two figures show Johnny Alpha and his partner, Wulf Sternhammer, riding Morks. 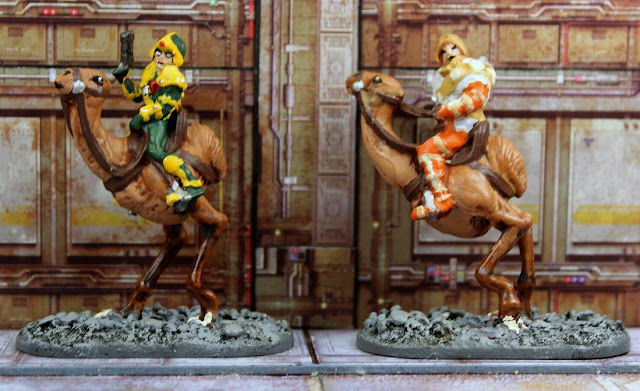 Bounty hunters often need to track their quarry into the wildlands beyond towns and cities, and on many worlds the indigenous Morks are the mount of choice. These bipedal mammals combine speed and durability with a seemingly high tolerance of radiation making them ideal steeds for bounty hunter and outlaw alike. Mork farms are not an unusual sight in the homesteads on the fringes of society. 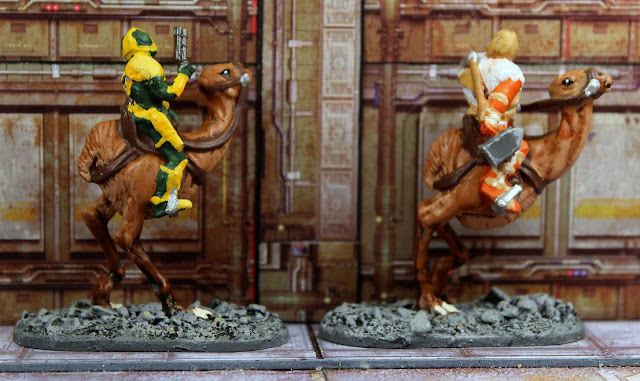 Johnny Alpha and his Viking partner, Wulf Sternhammer made good use of Morks on many of their bounty-hunting jobs - from tackling the vicious alien outlaws, Bubo and his gang of Howler Bad Boys to protecting alien farmsteaders from bullying neighbours intent on driving the Search/Destroy agents out. Allying speed and resilience, Morks can reliably get them to where they need to be - much to the chagrin of their quarry.
This set contains the two figures shown above, 2 character cards, 1 Armoury card (Medipack) and 2 Chicanery cards (Can I Borrow That? and Counter-Attack). It costs £15.00 from the Warlord Games store. I like these figures but I don't expect I'll get much use out of them. Incidentally, this is now my eighth figure of Johnny Alpha and my fifth figure of Wulf Sternhammer.
Posted by Vampifan at 12:18