Over the Christmas holidays I added to my collection of Rumbleslam figures with a few new purchases from TT Combat. These three characters are all Free Agents, which means they are not affiliated to any one casino and thus can be hired by any team without affecting their important sponsorship bonuses. 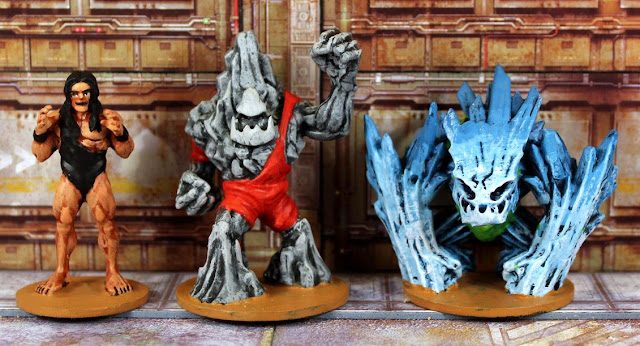 First up is Big Andy, who is clearly inspired by the dearly departed Andre the Giant.
"Contrary to his kind’s scary and angry nature, he has been known to play with his fans, carrying them on his shoulders as he walks about! Children love Andy and aspire to be as strong and tall as him when they grow up! But it is not wise to prod this slumbering titan. Even the calmest can lose their cool at times, but most don’t have punches that can break stone and arms thick as tree trunks!”
Big Andy is a great all-rounder superstar. He's not quite as dangerous as some (Trihorn, I'm looking at you), but his Dosh cost is barely higher than a regular Weight 3 wrestler. For that little bit more Dosh you get some incredible special abilities like Underhook Suplex and Body Slam which cause the all-powerful Knockdown. And because of his Walking Stupor passive ability, Big Andy is immune to the Dazed special rule, meaning he's very hard to take down.
Big Andy costs £8.00 and comes in three parts - body and two arms. I'm not a fan of the clear bases that come with these figures , so I have stuck all of my Rumbleslam figures on MDF bases.

In the centre of this trio is Granite. He could team up very well with the Golem from a Runic Thunder team (double the Stoneskin!), or could join in with The Cold Bloods for a little one-man flexibility that can hold his own without relying too heavily on the rest of the lizards for support.
"This resilient superstar has it all: power, toughness, size, charisma... There are few wrestlers in the ring that can match a natural charm and presence which have enthralled and captivated the hearts of countless viewers. He's even been known to break the rules to deliver a better show for his adoring fans. If he sees that the crowd is getting bored, he'll perform a dirty move, or kick an opponent when they're down. Cheers or boos, he only wants to entertain, as that's the only way to fill the seats of an arena.
With one of the best Defence stats in the game, you know Granite is tough to deal with. Combined with his Stoneskin Passive Ability he's almost entirely impervious to Brawl attacks.
His real draw is the Face Heel Turn Passive Ability though. Granite can choose each turn to be a face or a heel, gaining a stat boost to go along with it. That gives him a lot of flexibility, starting off as a face and getting extra attack power, then finishing the match as a Heel when it's time to throw the opponent out. Or you can go for a Crowd Pleaser to have your cake an eat it too! If successful in wooing the crowd, Granite may choose both choices, gaining extra attack and grapple, and getting the HEEL special rule too! Now that's a walking mountain with flexibility!
Granite costs £10.00 and comes in five parts, body, arms and legs. His legs were incredibly fiddly to fix to his body and in the end I had to use Milliput to secure them in place. 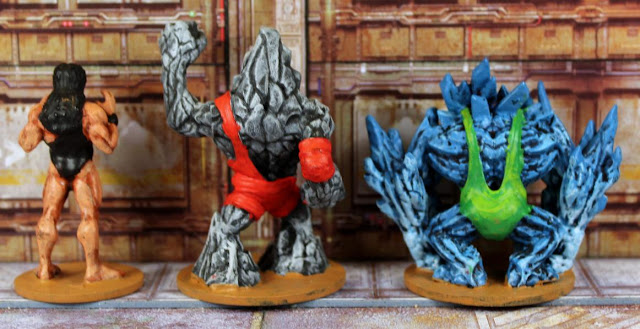 Finally, is Ice. So what teams is he best in? The Raging Beasts and The Green Bruisers benefit a huge amount from his presence, as he counters their low defence stats.
"A slippery superstar possessing a cool demeanour, Ice has chilled the hearts of his opponents for many years. Men and women can't help but shiver as he makes his glacial way towards the stage where his powerful figure gleams in the limelight. Try as they might to grapple or lift his monstrous mass, his glassy exterior seldom allows opponents to find purchase, whilst his hard as steel hide deflects all but the strongest of blows."
What Ice may lack in grappling and dodging, he more than makes up for in Defence. And defending himself isn't all he's good for! His Glacial Skin Passive Ability makes him extremely hard to grapple, and The Wall is a Passive Ability that allows him to share his Defence value with any wrestler in base contact. Just think on that for a second. You can take high offensive wrestlers or great grapplers, then just hug up to Ice and be extremely difficult to take out.
Ice costs £10.00 and he comes in four parts - body, head and two arms.
Posted by Vampifan at 11:40