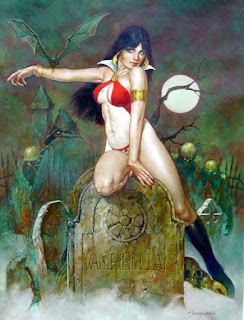 Here is my first Monthly Musings post of 2019. To the left of here is a portrait of Vampirella painted by Manual Sanjulian, whose work I highlighted throughout 2018 and will continue to do so for the near future. I really like this portrait a lot. There appears to be a trio of zombies and a hooded necromancer sneaking up on her but I bet she's fully aware of their presence.

January has been a very good month for me. I have been gaming practically every afternoon. The two games I have been playing were Nemesis and Resident Evil 2, both of which I have found incredibly addictive. The Nemesis game came with a graphic novel campaign that should be played in co-operative mode, which is the mode I usually play. I worked my way through the scenarios and completed them successfully. I gamed with four crew members. In the basic Resident Evil 2 boxed set there is a campaign booklet that contains eight scenarios. I have played five of them and hope to finish them in the next few days. I am using the four survivors that come in the basic set - Leon Kennedy, Claire Redfield, Ada Wong and Robert Kendo and they are still going strong. Once I finish playing this campaign (hopefully, successfully) I plan on running through the twelve scenario campaign in the Here's Negan game.

Painting has been going well. I finished painting the six survivor figures from the Here's Negan board-game. In addition I have painted some more Black Scorpion Tombstone figures and some new Doctor Who figures from Warlord Games. All of these will be shown on my blog in my February posts. Currently on my painting table are more Doctor Who figures and the new crew members for the Firefly: Brigands and Browncoats board-game. I should have these finished in the next week. Once they're done I plan on painting the figures from the Resident Evil 2 game, starting with the heroes.

For those of you who are interested, I am about to start my St. Trinian's campaign on my WOIN blog. I'll be using the N.O.W. rulebook for this campaign. I have just finished posting the last of my cast reviews and should be posting part 1 of the introductory scenario within the next few days. I know that some of you are eagerly awaiting this campaign. It will be story driven like my The Ace of Spades Campaign but I plan on including lots more how the rules work notes in my batreps.

One thing that has pleased me immensely is that I have spent nothing on figures or gaming products this month. I am trying to cut back on what I spend on gaming this year, so I'm off to a good start. All the best from Vampifan.
Posted by Vampifan at 10:25