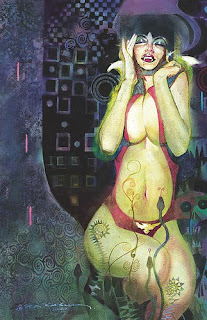 This piece of art to the left of her was painted by Bill Sienkiewicz, an American artist who worked on many Marvel Comics titles, especially, Elektra, Moon Knight and the New Mutants. He has a very distinct style and this is the only painting of Vampirella that I have by him.

So what have I been up to this past month? A lot of my attention has been focussed on the Core Space sci-fi skirmish game by Battle Systems. I'm pleased to say that all of the scenery items have been made and had their edges painted. I'm well on the way to finishing painting the first 19 figures which consist of the four crew members of The Black Maria, the four crew members of the Ion Hope, 5 civilians and 6 criminals. Once I finish them I'll move on to the Purge, the enemy of humanity.

I sent away to Mantic Games for a limited edition of Chris the leader of the Hunters in the comic version of The Walking Dead. He came with two resin supply pieces and they are all finished so look out for them real soon.

Gaming wise, I have finally gotten back to continuing my The Ace of Spades Campaign with a scenario that I wrote called Take a Chance on Me. The first three chapters have already been posted on my WOIN blog. Captain Kimberley Wells is participating in a high stakes poker game run over three days at the Casino Triomphe on the pleasure planet Golden 4 (Alhambra). It does have a slow start but soon it will get very messy and blood soaked as some of the rest of the crew (no prizes for guessing bounty hunter Julia Frostorm!) encounter the galaxy wide criminal empire known as The Organisation.

I am fully ready to start my my new Judge Dredd campaign on my WOIN blog using the Judge Dredd and the Worlds of 2000 AD rulebook but obviously that won't start until I finish my latest The Ace of Spades Campaign scenario.

I'm having so much fun with my hobby and I hope you are too. Until next time, all the best.
Posted by Vampifan at 15:15