One of the first figure sets I bought for Warlord Game's Doctor Who game was the box of three 35mm scale Judoon. For some inexplicable reason they remained unpainted until the end of last month. They were incredibly easy to paint, so here, at last are my Judoon. 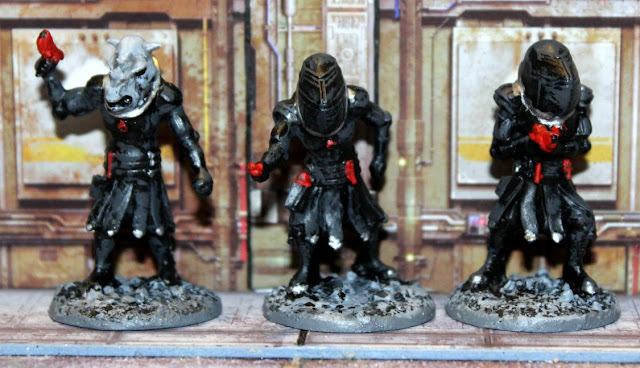 Single-minded in their pursuit of the Law, these black armoured Rhinoceroid bipeds serve as a mercenary intergalactic police force affiliated to thee Shadow Proclamation. Known for their strict adherence to the Law and their brutish application of it, the Judoon have been harshly but accurately described by the Doctor as logical but stupid. 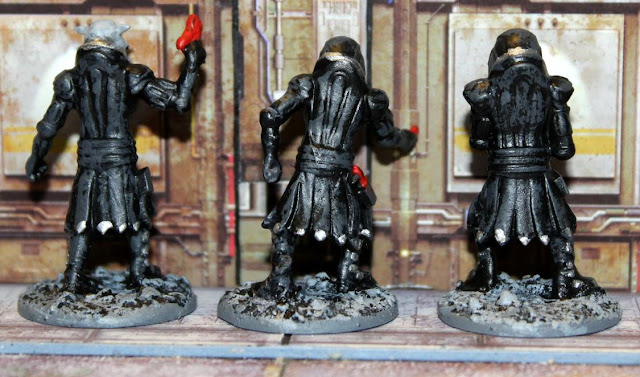 Judoon carry scanners to identify their quarries, translator devices to communicate during their enquiries and powerful energy weapons capable of incinerating their foes.
These figures are quite exquisitely sculpted and were a joy to paint. Obviously they will get most use in the Doctor Who: Exterminate skirmish game but I really want to use them in a Judge Dredd scenario, in which they land in Mega City One in pursuit of a time travelling villain (Kahler Tek perhaps) only to be interrupted by the Judges. Judges vs Judoon would make for a fascinating encounter since they both have so much in common.
This boxed set of three pewter figures costs £13.00 from the Warlord Games webstore.
Posted by Vampifan at 14:39