My ATZ Campaign - Day One Part 4

Last time, I left the post on a cliffhanger. Vampifan tried to take on a mob of five Terrified Civilians. He defeated one but then was knocked to the ground after suffering an Obviously Dead result. Was it really game over for our hero?
Relax, of course not. When he defeated the first Terrified Civilian, any result of Out of the Fight or Obviously Dead was treated as "victim runs by you." So clearly the results in this fight were different to those in normal melee combat. If the hero received an Out of the Fight or Obviously Dead result he had been rendered unconscious (see p.65). What this meant for Vampifan was that this location was over for him and he was not allowed to enter the gunstore. To be fair, if he had defeated the mob of Terrified Civilians he only had a 1 in 6 chance of finding what he was looking for. Not good odds. The delay in getting to the car park cost him vital time. Plus, facing five hostile civilians did not help either.
DAY ONE CONCLUDES
LOCATION 5(6) - Home
By now Vampifan had had enough and decided to head back home. But first he had to get there and once again that meant rolling on the Getting There Table (see p.64). He only passed 1d6. Because he was in a vehicle he had to compare his Rep with the location number. He had a Rep of 3 and this was location 5. If his Rep was higher than the location number he would count as having passed 2d6 and would arrive as normal. Obviously, his Rep was not greater than the location number so he counted as passing 0d6. He would arrive one location later, i.e. 6 instead of 5. 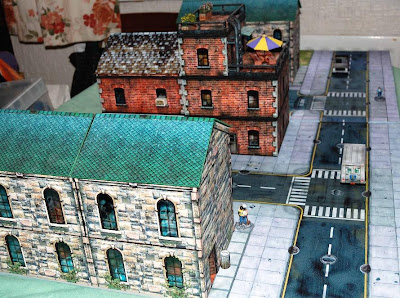 I set up the board and rolled 2d6 to see how many civilians would be present. I scored rather low with a 4 and placed tham randomly across the board. Vampifan's pick-up truck can be seen at the top of the main road. 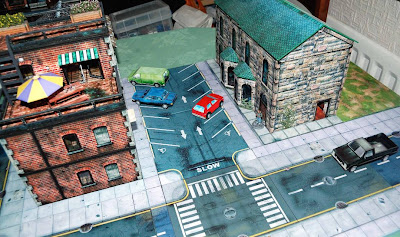 TURN 1.   ACTIVATION - Vampifan=1, Zombies=6
Cool! An activation score of 7. Could we see a zombie appearing on turn 1? Sadly, no! I rolled a 3 on the d6 to see if he turned up. I needed to roll a 5 or a 6 for the zombie to arrive. Vampifan slowed down and made a right turn into the car park in front of his apartment. 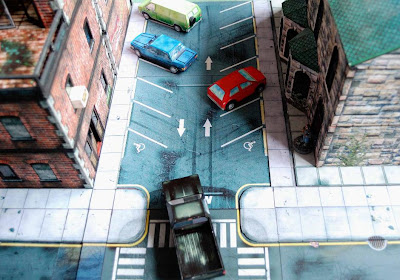 TURN 2.   ACTIVATION - Vampifan=3, Zombies=5
Vampifan parked his vehicle next to the front door of his apartment. If he could survive the next round or two he'd be safely home. What could possibly go wrong? 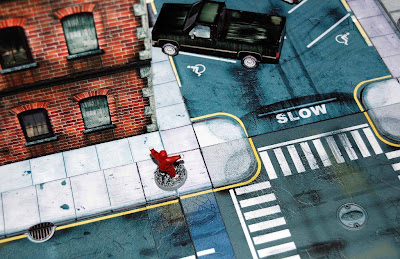 TURN 3.   ACTIVATION - Vampifan=5, Zombies=2
What could go wrong? Rolling a 7 on the activation dice followed by a 5 on the zombie appearance die to indicate a single zombie was closing in on him. I rolled my scatter die to determine where the zombie arrived and placed him 12" away from Vampifan. The zombie moved it's full distance of 6" towards the pick-up truck. Vampifan was unable to move this turn due to rolling too high on his activation die. 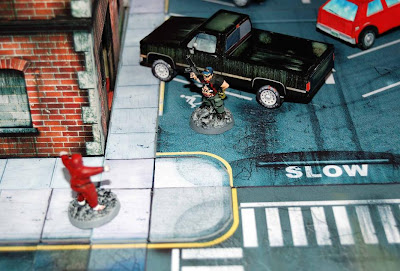 TURN 4.   ACTIVATION - Vampifan=2, Zombies=6
Vampifan switched the engine off and stepped out of his pick-up truck. He was going to retrieve his groceries from the back of the truck when he spotted the zombie. As the zombie was more than 3" away he could not take the Zed Or No Zed test. The zombie remained in place with its arms stretched out and emitted a low moan. 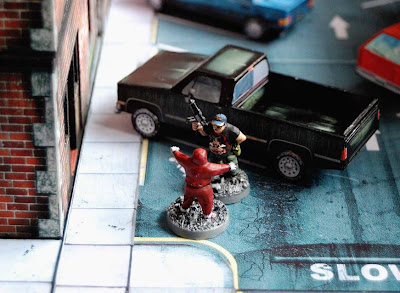 TURN 5.   ACTIVATION - Vampifan=4, Zombies=1
Suspicious of the hooded stranger, Vampifan stopped to see what he would do. The zombie charged him. When he got within 3" Vampifan took the Zed Or No Zed test and passed 2d6, realising what a threat the stranger was. This allowed him to Carry On, which unfortunately he could not do because his activation die was too high. So, he had to remain in place and take the Being Charged test. Fortunately, because he was a Star, he could choose how many dice to pass and naturally he chose to pass 2d6. The melee was over very quickly. Vampifan passed 1d6 and the zombie passed 0d6. This gave Vampifan an Out of the Fight result, which counted as an Obviously Dead result because his opponent was a zombie. A good solid punch to the head killed the zombie hoodie instantly. Way to go, Vampifan! 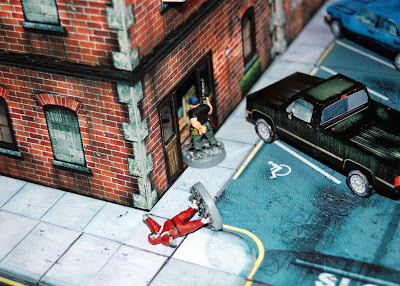 TURN 6.   ACTIVATION - Vampifan=1, Zombies=6
Not again! Another 7 on the activation and another chance for a zombie to turn up. Thankfully, the dice gods were smiling on our hero and I rolled a 2 on the reinforcements die. As Vampifan opened the front door of his apartment, his housemate, Big Sil, greeted him.
"Hey, Mr.S, you look all done in."
"You'll never believe the day I've just had!" Vampifan replied.
Day One was over for Vampifan. He had survived, but had he learnt from his experiences? The rule book does not state whether a character can improve his Rep or not after this particular scenario. It does state on p.61 that "after each successful encounter it is possible that a character can raise his or her Rep." Hmmm, does encounter mean each separate location on Day One? Or are all of the locations visited on Day One classed as one encounter? It is a grey area. I decided that because all of the locations on Day One were linked, it counted as just one encounter. So, was Vampifan eligible for a Rep increase? The four criteria for a Rep increase are:
1) Have killed at least one zombie. (Vampifan killed two.)
2) Did not receive a result of Out of the Fight. (Vampifan did not. He did receive an Obviously Dead result, whose effect was similar to being Out of the Fight but he did not recieve an OOF result. Another grey area here!)
3) Did not Hunker Down. (Never happened.)
4) The character found a resource. (Actually, he found three resources at his first location.)
Technically speaking, Vampifan was eligible to roll. You can argue point 2 all you like but I felt that Vampifan deserved his roll simply for making it to the end of Day One in one piece! So for Vampifan to go up a level he had to roll higher then his Rep on 1d6. I nervously rolled the die and let out a mighty cheer when I saw it was a 4. He'd scraped through by the skin of his teeth.
At this point I'd have liked to make Vampifan a Rep:4 Survivor but he had to remain a Civilian for the time being as he did not meet the criteria for a class change. See the section headed Choosing Your Class on p.5 of the rulebook. He only met one of the conditions required, i.e. he had killed a zombie. The first requirement was that the character had seen at least three zombies. Despite the fact that three zombies had appeared during the day, Vampifan only saw two of them - the one at the cash machine and the one outside his home. He never actually saw the female zombie when he was walking to the car park. But if he had, the third requirement would still have tripped him up. It states "you have had combat with an armed civilian, survivor, ganger or military character. This can be either ranged combat or melee." When Vampifan battled the Terrified Civilians they were all unarmed. So he remains a civilian.
I hope you have enjoyed my account of Day One of the zombie outbreak. I have two more scenarios involving Vampifan to post shortly with more planned for later in the year. Keep watching and thanks for all your comments. This has been an absolute blast!
Posted by Vampifan at 11:37