The introduction to my ATZ camapign has proved to be my most popular post so far, going by the number of hits and comments. Thanks to everyone who dropped by and big thanks to everyone who left a comment, either here or on one of the forums where it was pimped. Following comments made by Pudson I'm going to start with this -
HOUSE RULES
If ever there is a lull in the action then you can ignore the result of the activation dice solely for the purpose of activating your character. If the activation dice indicate a random encounter then that cannot be ignored and must be rolled for. My view is that if there is no chance of combat does it really matter if a character can move or not? Having him unable to move only slows the game down unnecessarily. You may disagree, which is why I have made this a house rule. Once there is an enemy figure on the board then the result of the activation dice must be adhered to.

Being on foot and heavily burdened with luxury items, Vampifan decided to retrieve his pick-up truck from a small car park in the centre of Mayhem City. As the rulebook states "this isn't a "peaceful day on the roads" so when you move from one location to the other roll 2d6 versus your Rep and consult the Getting There Table." (see p.64) Vampifan passed 1d6, which meant he would treat his destination as if arriving one location later i.e. as if this was his third location. I rolled 2d6 to see how many civilians would populate the area and rolled a result of 8. I placed them on the board and then rolled the activation dice for turn 1. 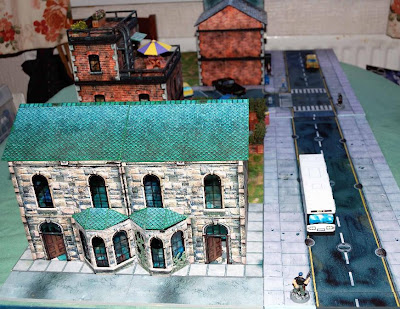 TURN 1.   ACTIVATION - Vampifan =1, Zombies =3
The game begins after Vampifan makes a normal 8" move onto the board. The activation dice indicate nothing special. Vampifan makes another normal move and spies the car park not far away. 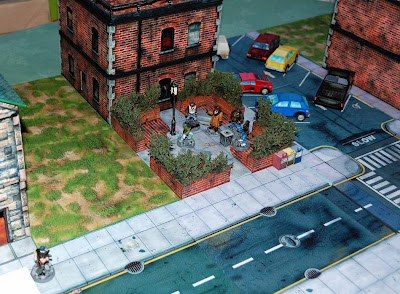 TURN 2.   ACTIVATION - Vampifan=1, Zombies=4
With the car park being so close, Vampifan decided to put on a spurt of speed and so took a Fast Move test (see p.12). He only passed 1d6 and thus increased his movement to 12". Note that if Vampifan had passed 2d6 he would not have been able to move 16" because I gave him the Slow Attribute (see p.7) to represent him being too fat and thus unfit. The best he can ever score on the Fast Move test is pass 1d6. 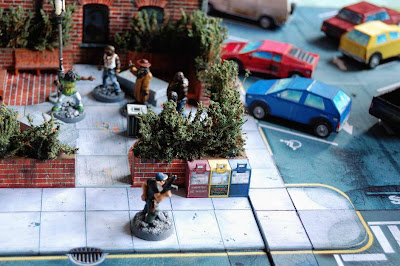 TURN 3.   ACTIVATION - Vampifan=6, Zombies=1.
Uh, oh! A roll of 7 indicates that a zombie might appear. As mentioned in Location 1 last time, a score of 5 or 6 on 1d6 indicates that a zombie has arrived on the scene. This is because on Day One all urban areas are classed as suburban areas. I duly rolled a 5 and sure enough a zombie would arrive. My house rule regarding activation no longer applied once I rolled for the zombie. As Vampifan was only a Rep:3 Civilian he could not activate this turn. 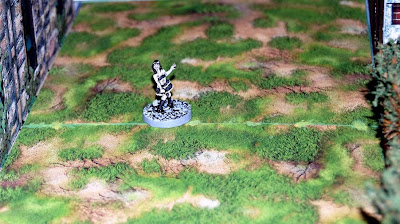 Here's the zombie and the scatter die indicated that she be placed on the grassland between the semi-detached houses and the small park. This teenage female was recently a cosplayer before she became a victim of the zombie plague. She moved 6" towards the nearest humans - the five coloured folk in the small park. 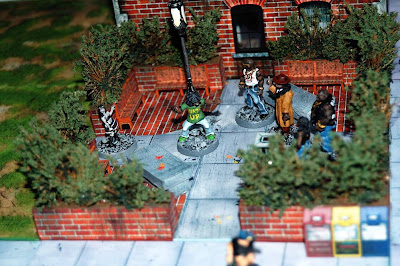 TURN 4.   ACTIVATION - Vampifan=5, Zombies=6.
This was an interesting activation result. Although individually the scores were too high for anyone to activate, added together they came to 11 and that meant that a single police officer would appear and approach the hero (see p.65). I rolled on the Police List on p.8 to determine his stats. A result of 8 on 2d6 revealed that he was a Rep:4 Police Officer. He was armed with a BA Pistol. I placed him next to Vampifan's pick-up truck. 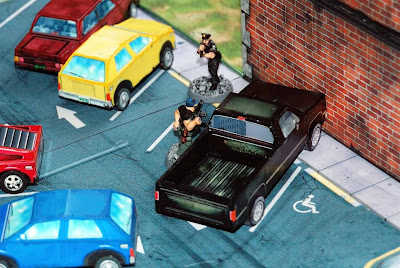 TURN 5.   ACTIVATION - Vampifan=2, Zombie=4
The five civilians in the park had to take the Zed Or No Zed test as the young zombie prepared to charge. All were classed as unarmed Rep:3 Civilians. Two passed 2d6 and were able to Carry On (the businessman in the hat and his hulking bodyguard). The other three each passed 1d6. Whoever the zombie charged would have to take a Being Charged test. Quite naturally, the zombie charged the nearest target - a Rastafarian gentleman. He passed 1d6 on the Being Charged test, allowing him to melee normally. Although he rolled 3d6 for his melee attack he only scored one success. The zombie rolled 1d6 for its melee attack and it too, scored one success. The combat was a draw and both opponents would fight again next turn.
Vampifan moved next to his pick-up truck. Because he was visibly unarmed, the police officer told him to leave the area.
"Sir, we've had reports of a disturbance in this area," the cop said. "I advise you to leave now."
"No problem, officer," Vampifan replied. "Let me put my groceries in the back of my truck and I'll be on my way." 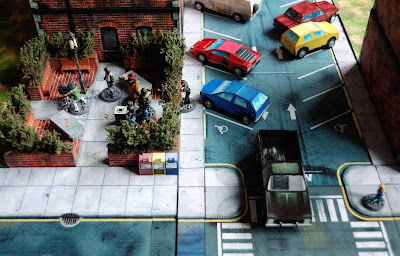 TURN 6.   ACTIVATION - Vampifan=3, Zombies=4
Another 7 on the activation dice. However, this time I rolled a 1 on the zombie reinforcements die so none turned up. The zombie continued her attack on the Rastafarian but this time she passed 0d6 and he passed 2d6. He jammed his fingers into her eyes and killed her instantly. Hearing the commotion, the cop crossed the car park to see what was going on. Vampifan got into his pick-up truck and drove away, ending this part of the scenario. Because this was Vampifan's third location his vehicle was safe and sound. So far so good.
LOCATION 4 - The Gun Store
Now that he was travelling by vehicle, Vampifan felt confident of reaching his next destination quickly. His confidence was well placed as I scored two successes on the Getting There table, meaning he arrived there normally. My Mayhem Armoury is not a big building, so I classed it as a Retail Store, which is smaller than a Retail "Box" Store. I rolled 2d6 for the number of civilians in the neighbourhood and ended up with 6 of them. 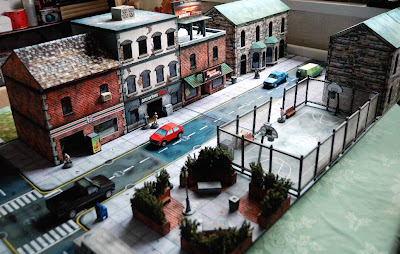 TURN 1.   ACTIVATION - Vampifan=1, Zombies=4
The pick-up truck has a normal speed of 18" per turn (see p.25) but because he was driving in a busy city centre, Vampifan drove at half that speed, i.e. 9" per turn. He drove along the street, wondering why there were so few people here. Perhaps it had something to do with the numerous outbreaks of violence that were erupting all over the city, according to the radio broadcast. He shivered as he recalled the pale-looking guy who had attacked that young boy near to the ATM machine earlier today. Creepy! 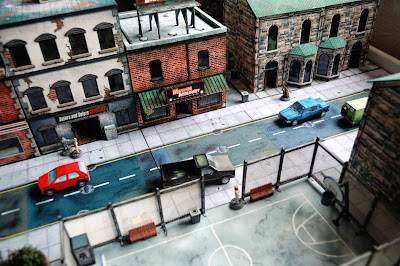 TURN 2.   ACTIVATION - Vampifan=5, Zombies=4
I ignored the activation dice and allowed Vampifan to park the pick-up truck opposite the gunstore. 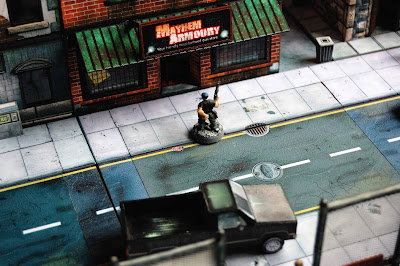 TURN 3.   ACTIVATION - Vampifan=2, Zombies=5
Vampifan stepped out of the pick-up truck and headed across the street to gunstore, wondering how many boxes of .44 Magnum rounds he ought to buy. 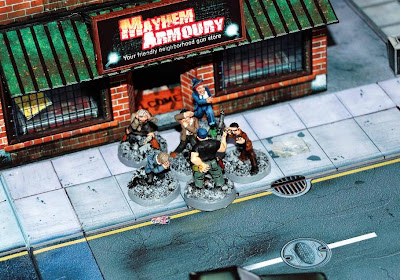 TURN 4.   ACTIVATION - Vampifan=3, Zombies=3.
Okay, here was something new and interesting on the activation dice - a roll of doubles. What this meant was that Vampifan would encounter 1d6 Terrified Civilians (see p.65). The rulebook mentions that "during the first days of the outbreak there will be widespread panic amongst the population. The Terrified Civilians rule represents these panicked crowds." I was desperately hoping for as low a score as possible when I rolled the d6, but alas, I rolled a 5. This was not good news for Vampifan. The five Terrified Civilians surged forward out of the gunstore, straight towards Vampifan. His only chance of getting past them was to fight them one by one! 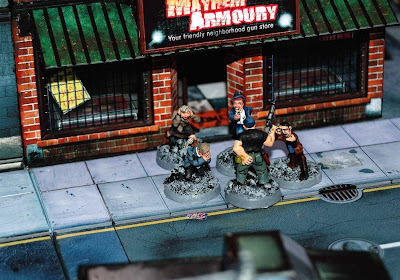 This fight represented Vampifan having to literally fight his way through the crowd. Each Terrified Civilian was classed as Rep:2, and would roll 2d6 in melee combat. Vampifan was still unarmed, so he rolled 3d6 for being Rep:3. He had to defeat each civilian individually before he could move on. If he scored an Out of the Fight or Obviously Dead result on them, they would run past him, allowing him to fight the next in line until they were all gone. In the first fight, Vampifan scored two successes and the Civilian just one. Vampifan won, so one down, four to go. 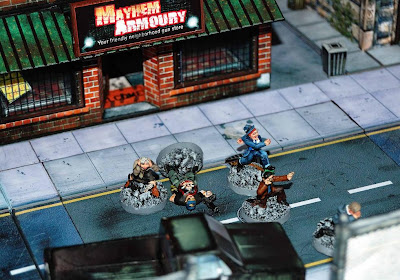 In the second fight, Vampifan scored zero successes (uh, oh!) and the Civilian scored two successes, giving a result of Obviously Dead! As Vampifan fell to the ground, the world turned black. It was game over! Is this the end of Vampifan? Has my campaign come to an abrupt stop before it's had a chance to begin? Better tune in next time, folks!
Posted by Vampifan at 12:35