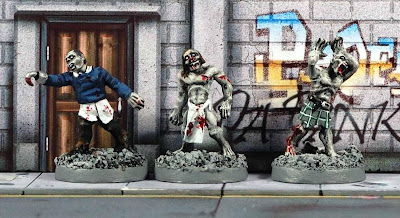 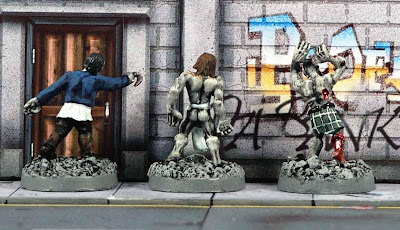 Black Hat Miniatures are a small UK-based figure company that makes a range of five zombies in 28mm scale. What became apparent to me when I looked at the images of them on their website was that these were designed with the fantasy gamer in mind. This did not deter me from ordering them as I knew that I could make them fit into a contemporary setting either by paintjobs or a bit of conversion work. The three males in the two photos above have had no conversion work done at all.
First up is DLZ004 Zombie 4 at the far left of the photo. What is unusual about him is that his right hand has been replaced by a hook. It is unusual but not unique as I can remember Studio Miniatures offering a zombie with a hook in set 4 of their range. There are no visible wounds on this zombie but I have bloodied the end of his hook and added a few splatters of blood to his shirt.
In the centre of this group is DLZ005 Zombie 5, a near naked zed, wearing nothing but a loin cloth. He is a very muscular male who clearly looked after his body before reanimating. There are no big wounds to see on him but look closer and you'll see small cuts to his chest, arms and forehead.
The last of this trio is DLZ001 Zombie 1, who is wearing a kilt. I'm rather pleased with how my tartan pattern has turned out as normally I do not like to paint tartan or checked patterns on clothes. This guy has had a huge chunk of flesh torn or bitten from the back of his lower right leg. It is so deep that his bone is showing through. There are a couple of holes in his lower back and right arm, which could be bullet holes. With both hands raised in the air he might be surrendering, until you realise that is something zombies never do. I think he's raised them just prior to grabbing hold of a victim. 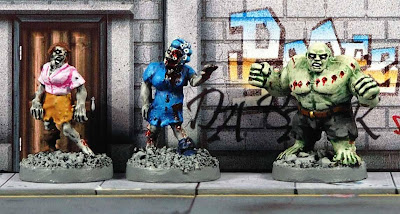 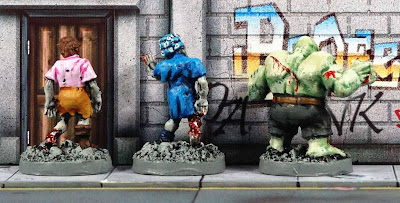 These three figures shown in the two photos above have all been converted in some way. The zombie at the far left of the group is DLZ002 Zombie 2, a male zombie dressed in a short sleeved top and a kilt. I did not want two kilt wearing zeds in this group so I decided to convert him into a female. I rounded out his bum and added breasts with a small amount of modelling putty. It was a very simple conversion. I left his/her hair as is. I'll admit she does look a bit butch for a female but so what? Not every female is blessed with stunning beauty. She has been bitten in the left lower leg, although not as bad as the previous figure. As a consequence, her left boot has gone missing.
The figure in the centre of this group is DLZ003 Zombie and is my most extreme conversion. She too began life as a male. I just thought that there was no way I was going to have three zombies in kilts in this group. He had to be transformed into a female as well. I worked on the body first and filed down his belt, which got covered over with modelling putty. Again, I made his bum more pronounced and I added a large pair of breasts to the figure. When that was dry I added a thin covering of modelling putty to his bald head and on a whim, decided to do his hair still up in rollers. I can't ever remember seeing a female figure with her hair in rollers so I suspect she may truly be unique. I saw her as one of the "blue-rinse brigade" before the zombies caught up with her. She was probably attacked whilst sitting in a chair at her hairdressers. She has also had a large chunk taken out of the back of her lower right leg and she, too, is missing a boot. Even more noticable, is her left eye, which is dangling from its socket. I'm very proud of this conversion. The body was easy to do but the hair required a good deal of skill to look right. If you wanted to convert him you could give him any hairstyle you want.
Finally, is MM002 Tonka, a figure from the Black Hat Mutants and Madmen Superheroes range. When I saw him, I thought he'd make a great "tank zombie." Converting him was a doddle. I drilled a line of bullet holes across his chest and used a craft knife to score some cuts across his back and right arm. I decided to paint him up in Citadel Rotting Flesh, which is how I paint all of my rage zombies.
Be aware that although these are sold as 28mm scale figures they are more "heroic" in scale and are nearer to 30mm. It's not too much of a height difference but it just might put some scale purists off buying them. The five zombies cost £1.20 each and Tonka costs £2.00. These are well sculpted miniatures and whilst I doubt if they'd ever be a person's first choice for starting a zombie horde, they may be worth considering if you want to bolster your numbers. They are very reasonably priced, as well. I can well understand that converting some of them may put  some of you off but first of all, I enjoyed the challenge immensely and secondly, they are available separately so you could either buy the figures you like best or buy them all and not bother with converting any of them.
Posted by Vampifan at 15:18