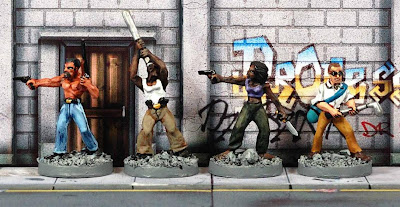 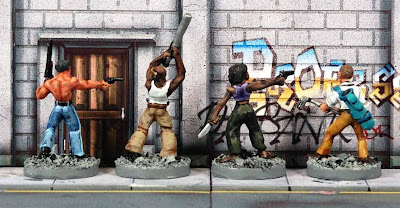 The four figures in the two photos above come from the West Wind Road Kill set GRK016 Zombie Hunters. The figure at the far left of the group is armed with a revolver in his right hand and a double-barrelled sawn-off shotgun in his left hand. He is naked from the waist up and seeing how well muscled and bronzed he is, I'm not surprised! Hey, if you've got it, flaunt it! I see him as a Hispanic, which is why I painted his flesh tones darker than I normally do. He is extremely well sculpted and in ATZ, he'd be ideal for either a Ganger or a Survivor.
Next up is a big, black dude swinging a metal baseball bat. Look closely and you'll see he has a pair of pistols tucked into the front of his trousers. Like the previous figure, he clearly works out and is very muscular. He is bald headed and wears a pair of sunglasses, a vest and a pair of baggy trousers. This is one tough hombre and again, would be ideal as either a Ganger or a Survivor.
Next in line is the only female of the group. I'm guessing the sculptor envisaged these being used in somewhere with a hot climate as all four are dressed for summer. This fit looking lady in a crop top and baggy trousers is armed with a pistol and a combat knife. She, too, has a hardass attitude and she'd be a fine addition to any group of Gangers or Survivors.
Last up is the only caucasian of the group. I think it's great to see so much ethnic diversity in this group. That gets a big thumbs up from me. This chap is armed with just a golf club, a useful two-handed improvised weapon. A golf bag is slung over his back but there are no more clubs in it. D'oh! Again, you can tell he's dressed for summer as his shirt sleeves are rolled up and he's not wearing a jacket. Plus, he too, is wearing sunglasses. They could be ordinary glasses, I know, but I decided to paint them as shades. This guy would work better as a Civilian or a Survivor. I just don't see him as a Ganger! 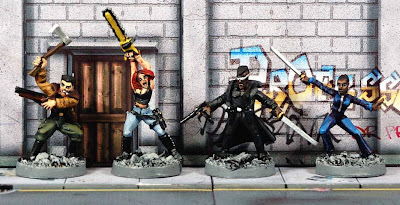 Continuing with the theme of zombie hunters, the two photos above showcase four of the Road Kill special characters. First up is GRKNET001 Cleaver Vine, who has an uncanny resemblance to the Marvel superhero, Wolverine! He is armed with an axe and a double-barrelled sawn-off shotgun. A nice touch is the cigar stuck out of the corner of his mouth. He has a slightly deranged look to him, but he is a great figure.
If Cleaver was borderline psychotic then this next figure, GRKNET002 Sister Saw, has tipped over the edge into full on psychosis. Her face has a very manic-looking expression, suggesting she is in a berserker fury. Her choice of weapons are far from subtle - a chainsaw, which she wields overhead, and a Big Ass Pistol strapped to her left thigh. I wouldn't want to mess with her!
Next up are the two vampire hunters from the Road Kill range. GRKNET004 Night Stalker is obviously inspired by the Marvel superhero, Blade. He is very heavily armed (as you'd expect) with silenced Ingram MAC10 sub-machine gun, katana and twin pistols. He has body armour covering his chest. A snazzy pair of mirrorshades and long leather coat completes his iconic look. I like his pose but I'm undecided about which Blade figure I like best - this one, the one by Musketeer Miniatures or any of the Heroclix versions. I like them all for different reasons, so I'll wimp out and just sit on the fence!
The final figure of this group is GRKNET007 Night Blade, a female vampire slayer. Mention the words "vampire slayer" to me and I automatically think of Buffy Summers. But in the Buffy TV series, there were other notable female vampire slayers - Faith and Kendra being the two most obvious. This figure looks nothing like Buffy or Faith but it's not too far off Kendra. And before anyone points out that the figure is missing Kendra's ponytail, yes, I know. I'm not saying this figure is definitely Kendra, but until something better comes along I'm using her as Kendra. The figure is nicely animated and is armed with a katana.
I don't review many survivor types as I tend to concentrate more on the undead. But where would the undead be without opponents? These are very nicely sculpted figures, although despite being advertised as 28mm scale these are more heroically sized at roughly 32mm. The set of four zombie hunters (GRK016) is priced at £6.00 on the West Wind website, whilst the four characters are priced at £2.00 each. They are well worth looking at if you don't already have them, in my humble opinion.
Posted by Vampifan at 11:04