Whenever I read one of LTL Dad's THW batreps, I noticed he used little coloured tokens to indicate the status of a particular figure. It was a good idea, I thought. Having originally seen the tokens being advertised on the THW website I knew that they were made by an American company called Litko Aerosystems. A quick glance at the Litko website showed me that they were a company who specialised in making gaming aids and accessories for a wide variety of games. Seeing as I am such an unashamed ATZ fanboy I thought I'd order some. They arrived a couple of weeks ago, so here's my review of them. 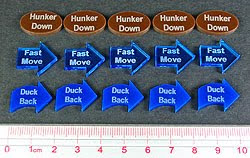 First up is the ATZ Action Token Set, which comprises 15 coloured plastic tokens - 5 Hunker Down, 5 Fast Move and 5 Duck Back. They are made of a hard plastic and are about 3mm thick, which makes them not too difficult to pick up. I just wish they'd made the Duck Back tokens in any other colour than blue as they are too similar in colour and shape to the Fast Move tokens. 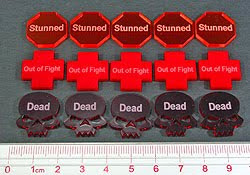 The next set is the ATZ Status Token set, which also comprises of 15 tokens - 5 Stunned, 5 Out of the Fight and 5 Dead. The Litko website offers a good tip if you find the writing on the tokens a bit difficult to read. Rub over the writing with a white wax crayon then wipe it clean with a cloth. Although I could read the wording on the tokens I bought well enough I still tried out the tip and it made quite a noticable difference! 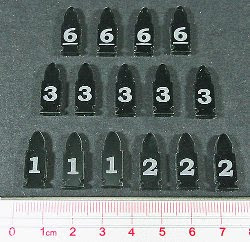 Moving on, we come to the ATZ Bullet Token set, which can also be used for anything that makes a loud noise in the game, e.g. screaming kids, a car or motorcycle engine or a chainsaw to name but a few. These 15 tokens comprise 3 number 1, 3 number 2, 5 number 3 and 4 number 6. 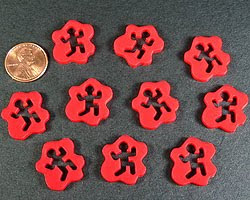 Finally, is the Obviously Dead Token set, which comprises 10 identical tokens. This was the one set of the range that I did not buy. For starters, it costs the same as the other three sets - $4.99 - so that represents poorer value for money. Secondly, you already get a set of Dead tokens in the Status set, so I don't see the need for this unnecessary duplication.
I ended up buying two each of the Action tokens and Status tokens and three sets of the Bullet Tokens. You can purchase them from http://www.litkoaero.com/ I noticed that THW have recently revamped their website and I couldn't find them listed there any more so it looks like you'll have to go directly to the source if you want to buy them. EDIT: I just got an e-mail from Ed at THW to say they are now available from the THW website, so there you go.
Which brings me to the main point of this review. Should you buy them? Are they essential for play? Undoubtedly, they are not essential for play. I've been playing ATZ for a few years now and never felt that the thing that was most missing from my games were a bunch of plastic tokens! Having said that, I think they look cool. The bullet tokens are without doubt, the most useful of the sets. Instead of placing a small die as I used to do, I can now use a bullet token, which also has the added bonus of showing the direction of the shot(s) being fired. I'll be using these in all of my future games of ATZ so look out for them in my next batrep sometime next month. So, should you buy them? That's not for me to say. You make up your own mind but if you're as big a fan of ATZ as I am then you'll surely want them!
Posted by Vampifan at 14:50