Tooth and Nail by Craig DiLouie 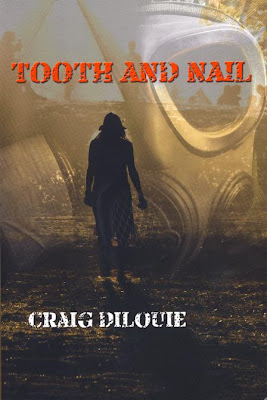 Okay, so Tooth and Nail came out in 2010, so this is hardly an up to date review but I only recently bought it and read it. I enjoyed it so much that I thought it was worthy of a full review rather than just a mention in my Monthly Musings. What makes this zombie apocalypse novel different (but not unique) from many other books in this genre is that the heroes are all military men. Having never served in the military myself, I cannot vouch for how accurate Craig DiLouie's novel is from a purely military perspective, but it all sounds plausible and authentic to me.
The story focuses on Lieutenant Todd Bowman and his men in Charlie Company's Second Platoon. The U.S. Army had suddenly withdrawn tens of thousands of troops from the Middle East to defend their homeland against an internal threat. A plague, similar to rabies, had run out of control and infected millions. The infected became rabid and violent and soon ran amok as they spread slaughter and disease in their path. The U.S. Army were tasked with safeguarding hospitals and other vital buildings.
The story opens with Second Platoon defending the perimeter of a hospital in the city of New York. There is much confusion about why they are there, and especially about who they are defending the hospital from. All around them they can hear the sound of gunfire and screams. When the soldiers are attacked by a few of the infected some are reluctant to shoot American civilians. After all, aren't they supposed to protect their fellow countrymen?
When Bowman receives order to relocate to a school that is being used as a overspill facility to relieve the hospitals and clinics, which are rapidly becoming over full with casualties, a short journey of a few blocks becomes a dangerous trek. More and more of the infected attack the group as they make their way to their destination on foot. Once they reach the school they have to clear it of the infected to make the building safe and secure.
Elsewhere in a research facility, Dr. Valeriya Petrova is one of a small group of scientists searching for a cure to the disease. Unfortunately, the disease spreads to the building and disaster strikes.
Lieutenant Bowman discovers that the U.S. Army are suffering catastrophic losses. Contact with higher command becomes increasingly difficult due to the loss of so many personnel. Eventually, he receives new orders - travel to the research facility occupied by Dr. Petrova and lead her safely to Central Park for a helicopter evacuation. I shall say no more about the mission but by now the infected outnumber the healthy in New York.
On the whole, I thoroughly enjoyed this tense and action-packed thriller. I do have reservations about calling it a zombie novel. Some of the soldiers in the novel do call the infected "zombies" but most of them call them "Mad Dogs" or "Maddies". These "zombies" are more akin to the infected seen in the films 28 Days Later and 28 Weeks Later. They are all fast runners, they pass on the infection by biting and they can be killed very easily. Any wound that would be fatal to a normal human will be fatal to them. So, no head shots only in here. I must admit that this did partially dilute my enjoyment of the novel as I am not a fan of this type of "zombie". In ATZ terms, the infected would be Ragers, although a lot easier to kill - on a par with normal zombies.
What is abundantly clear is that without a clearly defined strategy for dealing with the infected, chaos rules. Thus the virus spreads far too quickly and society collapses into panic and anarchy. The breakdown in communications between Second Platoon and the rest of its Company has the feel of authenticity when no one is sure of just what is happening. Despite my concerns about this being a true zombie novel, I enjoyed it enough to give it an 8 out of 10 rating. It's worth hunting down if you haven't already bought it.
Posted by Vampifan at 12:33