As well as making card buildings, I like to make card vehicles. Now, I may have fell out of favour with World Works Games when it comes to buildings (basically, I'm not a fan of their new TLX buildings) but as far as model vehicles go, WWG are still number one in my opinion. Here are my two latest models and these came from the old Mayhem Junkyard set - a digger and a grabber.

When I decided to make these, my first thought was, "should I make the digger or the grabber?" What an idiot! The obvious answer was to make both! To the left is the digger with its bucket scoop at the end of its arm. To the right is the grabber with its mechanical claw at the end its arm. 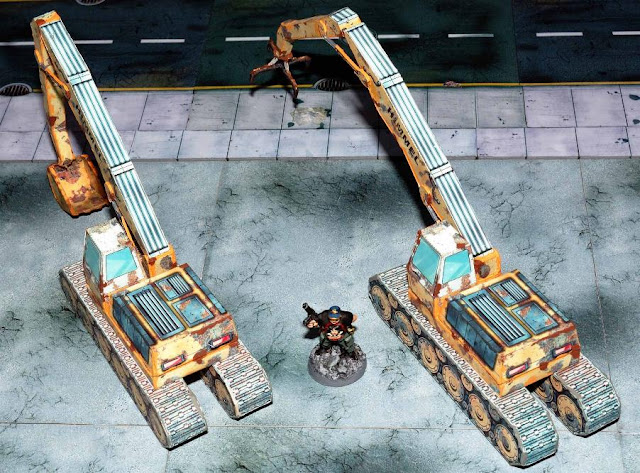 Regarding the construction of these two models, the tracks and body were very easy to make. The arms and their attachments were much, much harder to build, especially as I reinforce my models with mounting card. Actually, despite the extra effort, it has paid dividends. I can just imagine how flimsy the arms and attachments would be if I hadn't reinforced them. I'm comforted by the fact that these will stand up to a lot of handling when I'm gaming. 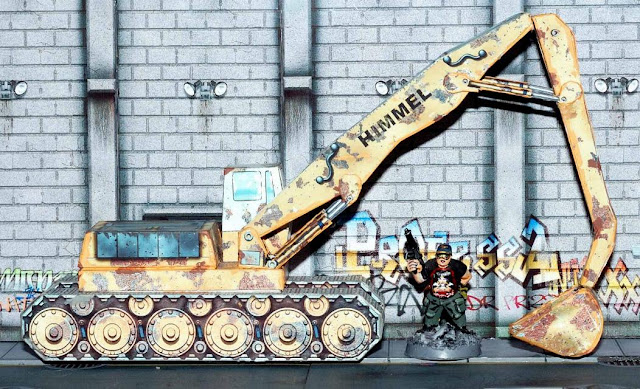 This side view shows the vehicle with the digger attachment. The two small, slender hydraulic arms on either side of the main arms were reinforced with thin card, but when glued back to back are quite thick and robust. There is very little space to work with for attaching the bucket to the end of the arm, so I glued it in place with a dab of superglue to get a really strong bond. 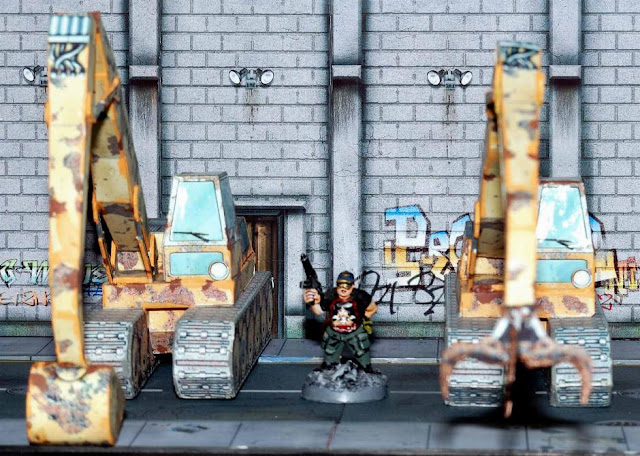 I normally print my vehicles onto satin photo paper for a semi-gloss look. For these, however, I printed them onto my standard matte photo paper. It reinforces the fact that they have not just rolled out of a factory but are working vehicles that will get dirty very quickly. One thing I did do, which isn't too clear from my photos was to gloss varnish the windows.

Here we have the side view of the grabber. The grabber itself was reinforced with thin card and it was the most fiddly part of the model to cut out and glue together. One thing that I always do with any card model is to "edge" them. Edging is colouring in the white edges of your model so that they blend in with the rest of the model. Most tutorials suggest using felt tip markers to edge. I prefer to use acrylic paints. This means you have to take extra care and a steady hand is a must. However, on the plus side, it gives me a greater range of colours to play with and I can more accurately match up the colours required. 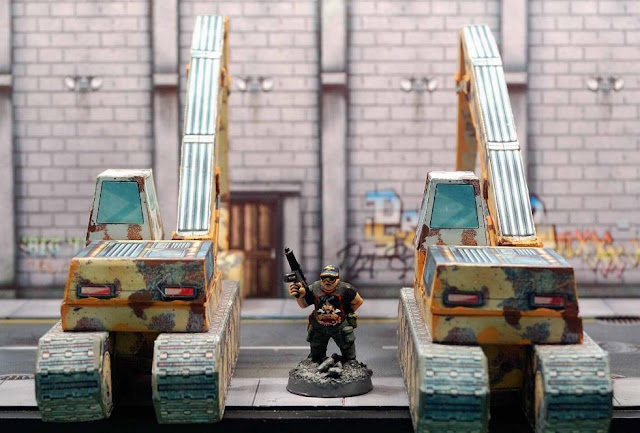 If these were die-cast models, you'd be able to move the arms up and down. Unfortunately, that is not an option with these, so the arms have to be glued into one position only.The hydraulic joint between the bend in the two arms gives you some variation in how the arms can be positioned.
Keen-eyed viewers will have seen the digger version of this pair making an appearance in my "Assault on Precinct 13" scenario, where it was no more than a background prop. These would both make fine zombie fighting tools, with a number of options for dispatching zeds. I'm very happy with how they have turned out, but I must stress that these are not suitable models for the beginner.
NOTE: the first five photos have been edited to show the bucket attachement to the digger fitted the correct way round - facing the cab.
Posted by Vampifan at 12:22