Two of my favourite films are the two recently made St. Trinian's films of 2007 and 2009. They are such a lot of fun and hugely entertaining. I bought them both on DVD just after Christmas and I thoroughly enjoyed watching them again... especially all the special features. St. Trinian's 2: The Legend of Fritton's Gold has an extra disc full of extras, lasting longer than the film. Great stuff! This assortment of four 28mm scale St. Trinian's schoolgirls features two members of the films and two girls that I have invented.

At the far left of these two photos is Annabelle Fritton (played by Tallulah Riley). In the first of the two new St. Trinian's films she was the new girl - a fish out of water and a proper little daddy's girl. For her it was sink or swim time and when she discovered that her father was a crook she became a true St. Trinian's schoolgirl. She got a sexy make-over not unlike the figure shown above. This figure from the Copplestone Castings Future Wars  set FW46 Corporate Babes 2 is a very close likeness to Annabelle. Okay, so she should be wearing sexy stockings and suspenders instead of those boring white socks but I can live with them. She still looks sexy and dangerous with her katana. Admittedly, she never used a katana in the films but who cares? I love sexy Annabelle and I love this figure.
Next up is Kelly Jones, (played by the wonderful Gemma Arterton - drool!) the head girl of St. Trinian's in the first film (Annabelle becomes head girl in St. Trinian's 2) and an agent of MI7 in St. Trinian's 2. She is quite the action hero and she believes in leading from the front. This figure from Copplestone Castings Future wars set FW27 Corporate Babes is a really good likeness of Kelly. The hair is just perfect. Obviously, this is Kelly as head girl. She is armed with what looks like an old broom-handled Mauser pistol. In her left hand she holds a pink mobile phone. Once again, my only criticism of this figure is that she should have worn stockings and a suspender belt instead of white socks. Even so, it's still a great figure. Kelly rocks! 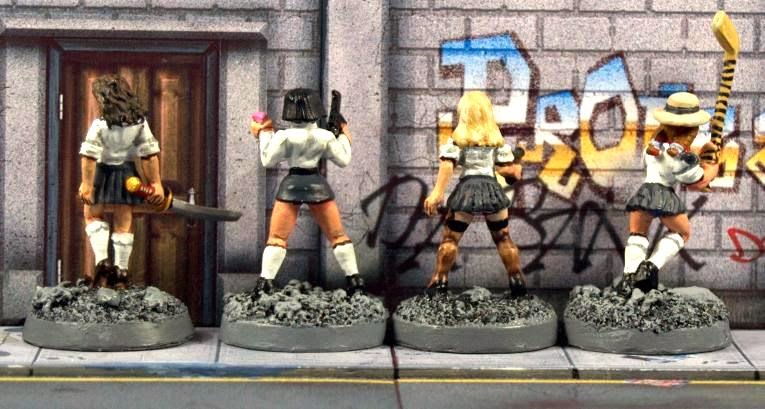 Third in line is Rachel Smith-Edwards, a unique figure made up by me and converted by me. She was originally a figure from Copplestone Castings Future Wars set FW45 Bodyguards in Bikinis but I added her skirt, shirt and tie from Milliput modelling putty. She belongs to the Posh Totty tribe of girls in St. Trinian's. The girls of St. Trinian's are divided into numerous tribes, often at odds with each other but united when their school is threatened. Rachel is armed with a 9mm pistol. Because she had bare legs it was very easy to paint her with stockings and suspenders. Yes, I admit I am a fan of stockings and suspenders! I'm sure I've mentioned this before.
The final figure in the photos is Regina Hilton. Her name was made up by me and like Rachel she does not appear in any of the films. This is a rather strange figure. A couple of years ago I sent away for the complete range of Ground Zero Games rather naughty Gentleman's Club 28mm scale figures. The good folks at GZG sent me about half a dozen complimentary figures, free of charge with my order. One of them was this lass. Try as I might, I can't find her anywhere on the GZG website. With her hockey stick held high as she charges forward, tie and ponytails streaming behind her, she is a perfect St. Trinian's schoolgirl. I just wish I knew more about her.
I must admit that I am not a big fan of Girls Aloud but I absolutely love this song of theirs. This is the first time I have added a video to my blog and I was surprised at how easy it was to upload. Thanks, Blogger. The song is the St. Trinian's Theme played at the end of the first film. It also appears on the soundtrack of St. Trinian's 2. So who wants to sing along to this incredibly catchy song? What's that? You don't know the lyrics. Well here they are -

Make us worthy, make us proud
Teach us not to be too loud
We'll try and fit in with the crowd
But we are St. Trinian's

We can't feel the way we feel
We were born to keep it real
Hockey sticks and balls of steel
We are St. Trinian's

You bite us we'll bite you back
Better be scared when we attack
Feel the fear, we're maniacs
St. Trinian's

Check out our battle cry
A song to terrify
No one can stand in our way
We are the best
So screw the rest
We do as we damned well please
Until the end
St. Trinian's
Defenders of anarchy

We are the best
So screw the rest
We do as we damn well please
Until the end
St. Trinian's
Defenders of anarchy

Next time I'll be reviewing the eight Crooked Dice 28mm scale St. Searle's schoolgirls who have all transferred to St. Trinian's. Defenders of anarchy - you better believe it!
Posted by Vampifan at 16:29