St. Trinian's seems to be the flavour of the month for me. Having recently purchased the two recent remake films on DVD I also bought the boxed set containing the four original films from the 1950's and 1960's. So I am now well qualified in the subject of St. Trinian's. I thought I'd revisit four figures that I showed on my blog five years ago. Since then they have been repainted and one of them (Froggy) has had a name change. These four girls were sculpted by me about six years ago. They are based on set Girl001 Sorority Twisted Sisters from Graven Images’ Dystopia range of 40mm scale figures. Being 40mm in size these were far too big to use in my collection of figures. So, I resculpted them in 28mm scale, meaning these four figures are totally unique! Once again, I came up with their names and none of them are based on characters from any of the films. 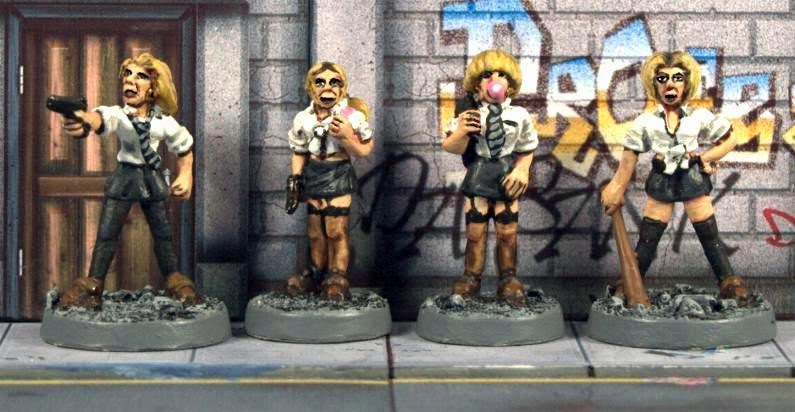 The first girl in this set of four is Sabrina Sykes. She is armed with a 9mm FN Browning High-Powered HP-35 pistol and a flick knife, which is hidden in her skirt pocket. She is an incredibly accurate shooter. She is wearing opaque black tights, which I always regard as passion killers!
Second in line is "Froggy" Fraser. "Froggy" was so named because she looks like a frog! She too, is armed with a 9mm pistol and a flick knife. She is also the group’s medic and she carries medical supplies in her pink backpack. Rather than leave her bare-legged I painted her wearing stockings and a suspender belt, which many of the St. Trinian's sixth formers wear.

Third in line is Rosalie Alexander, a bubblegum-chewing miscreant with a serious attitude problem. At first glance she appears to be unarmed but hidden in her blazer, which she has slung over her back, are six sticks of dynamite, a flick knife and a spray-can of paint. She is the scrounger of the group and has a bad attitude. She is another girl who favours stockings and a suspender belt.
Finally, is Bridget Strong, the psychopathic bully of the group. Although armed with nothing more than a baseball bat, she is more than a match for most fighters. Her particular non-combat skill is breaking and entry. In ATZ-FFO she'll have high Melee and Savvy skills. She is wearing black opaque hold-up stockings. All four of these girls are blondes but none are natural blondes. They all have black roots showing. 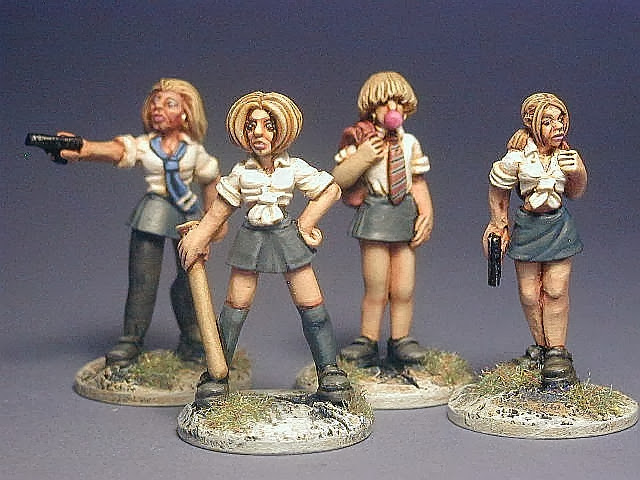 I enclose a photo above of the four 40mm Dystopia figures from their website so you can compare my sculpts with the originals. None of these will win any beauty contests, will they?  I'm not sure if these are still available for sale - I suspect not. Those of you with long memories or who have been following my blog since the start may well remember that I ran a scenario using these four girls plus two of my Copplestone Castings schoolgirls in a scenario for a set of zombie rules that I was play-testing. The rules got no further than the play-testing stage but if you want to check it out here is the link to it - http://vampifansworldoftheundead.blogspot.co.uk/2009/06/st-trinians-and-living-dead.html
This concludes my reviews of my St. Trinian's schoolgirl figures... for the time being. Last week I placed an order with Hasslefree Miniatures for four more girls, which I will convert. I also sent off for their pack of five hockey sticks. As soon as I get them converted (which I have already started on as the package arrived yesterday) and painted I'll review them. Look out for them soon. Then I must bow to pressure and run a scenario pitting the girls of St. Trinian's versus a zombie horde. That should be fun! The zombies won't know what's hit them!
Posted by Vampifan at 11:28