Having introduced you to my collection of 28mm scale St. Trinian's schoolgirl figures last post it's time to take a look at the bulk of my collection, eight figures from Crooked Dice Games (CDG). With the exception of one figure (Misty) these are all quite new figures, having been released last November. As soon as I got them they jumped to the front of my figure painting queue. Well, would you want to argue with them? 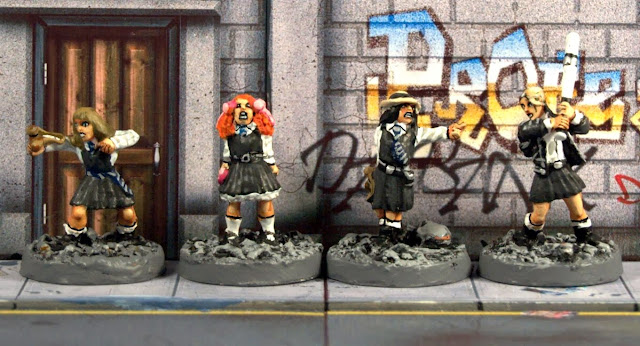 We start off with three fourth formers and at the far right, a fifth former. They are all original figures in that none of them appeared in any of the St. Trinian's films. Most of their names were invented by me.
First in line is Nikki Thorpe, a member of the Chavs tribe. I told you last time that the girls of St. Trinian's are divided into numerous tribes. She is nicely posed firing her catapult. Note that she has used her tie as a belt rather than wearing it round her neck. The little rebel!
Next, is "Violent Elizabeth" Crompton. Violet Elizabeth Bott was a character in the Just William books by Richmal Crompton. But this character, whilst sharing a similar name is far more dangerous, hence her nickname, "Violent Elizabeth." She has been beautifully sculpted screaming her head off because she hasn't got her own way. Someone will suffer for upsetting her! She'll "thcweam and thcweam until I'm thick" Yes, she does have a lisp but it is unwise to mention it or even worse, to mock it! Translated, she means she'll scream and scream until she's sick. 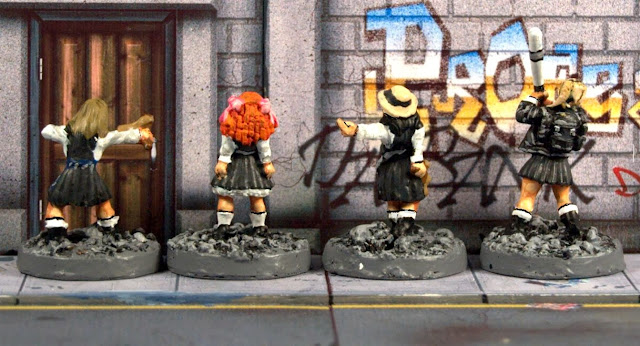 Third in line is Lucy Parker, another Chav. She is just so full of character. She carries a catapult in her right hand. Her left hand is giving someone the finger and her face has been sculpted in a scowl that just screams "Screw you!" I like this figure a lot. She is the only figure out of these two sets to wear a hat.
According to CDG, Dorothy Thorpe (I added her surname) loves sport and cooking. She's armed with a baseball bat and a backpack full of home made explosives! Most St. Trinian's schoolgirls prefer the hockey stick as their weapon of choice but Dorothy is a bit different. Note that she is wearing a leather biker's jacket - hardly regulation school-wear!

Next up are four hockey stick wielding schoolgirls. All of them are sixth formers and just one of them (Polly) appeared in the 2007 St. Trinian's film.
At the far left is Jackie Grimshaw, a sporty lass who loves hockey, but who rarely plays by the rules. She is holding her hockey stick aloft as she shouts defiantly at the opposition. In her left hand she holds a dagger with a wicked looking blade. I wouldn't want to face her!
Next in line is Polly Cole, the geek and a bookworm. Polly was a character in the 2007 St. Trinian's film and was played by Lily Cole. Lily is also known as a supermodel, so she was clearly cast against type. Polly didn't have a surname so I just pinched Lily's surname for her. This figure bears a remarkable similarity with Polly and I'm sure the sculptor was inspired by her. She holds her hockey stick nonchalantly over her right shoulder and is far more absorbed in reading her book. CDG suggests she is reading A Clockwork Orange.

Third in line is April Stevens, whom CDG describe as "the looker" - and who am I to disagree? She has to belong to the Posh Totty tribe of girls. She is certainly the most beautiful of the eight girls featured here. But the way she holds her hockey stick in a two-handed grip suggests she means business and is not to be messed with.
Finally, we come to Misty the Zombie Hunter, her nickname according  to CDG. She came out long before the other seven girls but she does fit in well with the others. I gave her the surname "Winters" as I see her as a darker version of Buffy Summers aka Buffy the Vampire Slayer. Misty is not unlike Faith the Vampire Slayer when she went off the rails. I see Misty as a fearless fighter but she also has a soft side as witnessed by the teddy bear she has  strapped to her belt. Misty is the best melee fighter in St. Trinian's and is something of a legend.
Crooked Dice Games use these girls as part of their fictional St. Searle's School. Ronald Searle was well known as the illustrator of the St. Trinian's novels from long ago, so Crooked Dice have cleverly kept the St. Trinian's connection alive. I have simply transferred the girls from St. Searle's to St. Trinian's. All of the figures shown here can be purchased separately for £3.25 each. However, if you buy each set of four - Savage Schoolgirls Set 1 and Savage Schoolgirls Set 2 - then they cost just £12 per set, saving you a pound on the price of buying them individually. Set 1 contains the 3 fourth formers and the fifth former. Set 2 contains the 4 sixth formers with hockey sticks. I can highly recommend them.
Posted by Vampifan at 11:42