As I draw to a close of my reviews of the figures of the Castle Ravenloft board-game, you will notice that the Villains are getting progressively stronger and tougher. For this penultimate review I'm showcasing the Zombie Dragon. 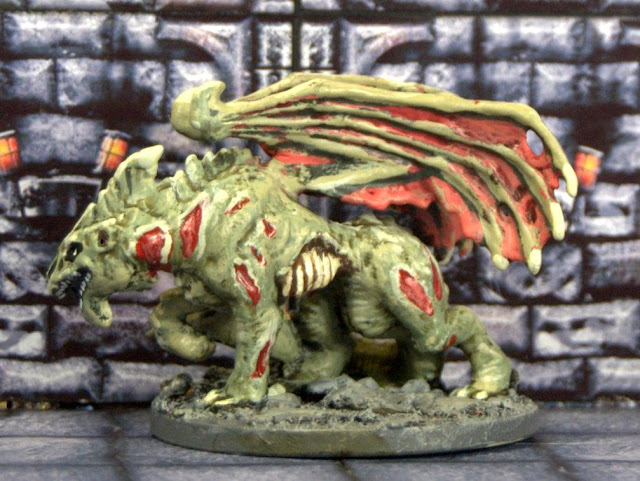 This is a large creature on the same 50mm diameter base as the Flesh Golem that I reviewed last time. I gave a lot of thought as to how I wanted to paint this monster, as dragons can be painted in many different colour schemes. There is no right or wrong answer here - just what works best for you. With that in mind, I settled on Foundry Cadaverous Green 46 for the skin and Foundry Nipple Pink 16 for the wings. I wanted him to look necrotic, unhealthy and diseased. As with Adam, my Flesh Golem, strips of skin have peeled away to show his bones and muscles but because his heart is no longer working, no blood is being pumped out.
The Zombie Dragon is a Level 5 Villain and activates at the start of each Villain Phase. His stats are AC13 and 13HP. 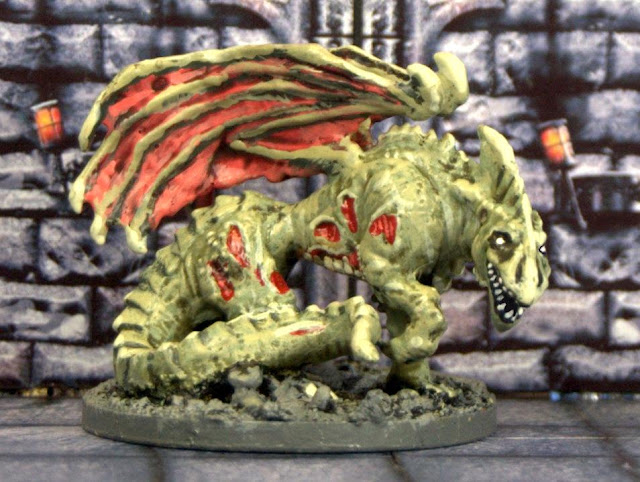 The Zombie Dragon's tactics are -
If the Zombie Dragon is on a tile with a Hero, it attacks each Hero on that tile with Claws, Wings & Tail.
If the Zombie Dragon is within 1 tile of a Hero, it moves adjacent to the closest Hero and attacks with a Bite.
Otherwise, the Zombie Dragon moves 1 tile toward the closest Hero.
A Claws, Wings & Tail attack gives a +7 bonus to hit and causes 1 damage, as well as causing the Hero to be Slowed and placed 1 tile away from his or her tile.
A Bite attack gives a +7 bonus to hit and causes 2 damage.
Whilst the Zombie Dragon is larger than a 28mm tall figure it is, by dragon standards, quite small. That said, it is still a tough opponent - 13HP are a lot when most Heroes only have 5HP. As far as the sculpting goes, I really like this figure. I'm now thinking how I can use it in Zombicide: Black Plague?
Next time, the one you've all been waiting for - Gravestorm the Dracolich.
Posted by Vampifan at 11:06