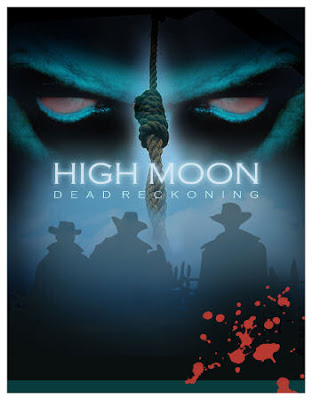 It seems like a very long time since I last reviewed anything by Two Hour Wargames (THW). That's simply because I haven't bought anything new from them... until recently. One supplement in particular, High Moon: Dead Reckoning had me very excited for a number of reasons. First up, it was both a supplement to the excellent Six Gun Sound Wild West rulebook as well as a stand alone rulebook in itself. Secondly, it introduces Weird West elements to the genre with rules for Vampires, Werewolves, Witches, Warlocks and Zombies, either as heroes or villains. Cool!

Wild West gaming in 28mm scale is something I'd love to get into if only I could find the time. I already own a large collection of 28mm scale Wild West figures (most need re-basing and repainting, however) and a load of card model buildings I could use (sadly, all unmade). I had already decided that if I ever succumbed to the urge to take up Wild West gaming seriously then Six Gun Sound would be my "go to" rules. They really are superb and far more detailed than most THW rulebooks. Taking on this challenge, assuming I decide to, will require a large investment in time but fortunately, not in money. Although, having said that, I'm sure I could find plenty of new figures I'd want to buy. That's always the way, isn't it?

High Moon adds a whole new dimension to the Wild West genre and that is, of course, the supernatural. You could use High Moon without referencing the supernatural elements. It is basically a streamlined and simpler version of Six Gun Sound. But that surely misses the point. What makes High Moon stand out are its detailed rules for the creatures of the night. Let's take a closer look at them.

Vampires are fast and very hard to kill. This manifests itself in a number of ways. When rolling for Activation, a Vampire may roll twice if desired and choose the highest result. This Attribute is called Precognition. A Special Ability called Blinding Speed works whenever a Vampire is fired upon by a ranged weapon. The Vampire rolls 1d6 vs. its Rep.  If it passes 1d6, the hit becomes a miss. If it passes 0d6 or rolls a 6, the hit remains. Another Attribute they have is Dread, meaning all Vampires cause Terror, which can affect opponents in a variety of negative ways. As with traditional Vampires they have one special disability - an aversion to sunlight. Prolonged exposure to sunlight will kill them. All damage from normal weapons is reduced in severity against Vampires. Silver bullets or silver tipped weapons may cause normal damage but not always!
If you feel up to a challenge, you can play a Vampire Hunter, a special breed of human, trained to hunt and kill Vampires. They are more attuned to vampire lore than normal humans.

Werewolves (or Were-creatures as you can also encounter Werebears or Werecoyotes) are more pack-oriented creatures than most supernatural beings. A Werewolf's Special Attributes are Causes Terror (as Vampires do) and Leap, which allows the Werewolf to leap onto the roof of a single storey building or move 8" across the ground. They have a Special Attribute called Fast Mover, which allows them to take the Fast Move test with 3d6 instead of 2d6 and counting all results. A Were-creature can transform from human to animal or back again in one complete Turn. As with Vampires, silver bullets or silver-tipped weapons may harm a Werewolf. If hit by a normal bullet when in human form, the Werewolf will transform on the next turn it is active.

Witches (male Witches are called Warlocks) are very rare, secretive and tend to be loners but they are powerful spell casters. A Witch has two Special Attributes. First is Blink which is used if the Witch wins a Draw! or In Sight test. The Witch rolls 1d6 vs her Rep. If successful, the Witch disappears and reappears 6 + 1d6" behind the opponent. Secondly, all Witches possess Casting, the ability to use Magic Spells. Spells take the form of Damage (offensive), Dazzle (distraction) or Defend (protection). The specifics are left up to you to decide. Some Witches may know Speciality Magic which takes two forms - Potions and Challenge Spells (these are spells not covered by the three main categories). Note that if a Witch is carrying any weapon except for a knife, she can not cast spells.

Having read this supplement I am very keen to try it out. I like the detailed rules of Six Gun Sound, but I know some folk will be looking for something simpler and quicker to play. High Moon would seem to be the solution. Most of the basic rules have been tweaked to simplify game-play. One major change is that there are now only two Reaction tables to learn - Being Shot At and Man Down, which will please a lot of people. Anyone familiar with any of the THW rulebooks should have no problem in using High Moon.

You can purchase High Moon from the THW webstore - http://www.twohourwargames.com/himodere.html at $17.00 for a PDF version or $20.00 for a printed version. I highly recommend this product to anyone interested in looking for a Weird West setting and I award this book a 9 out of 10 rating. Yes, it is that good. Although I haven't reviewed Six Gun Sound yet, if I had it would score a perfect 10 out of 10.
Posted by Vampifan at 10:48