Here I present my four finished conversions for the Forgotten Heroes project. As I explained last time, the heroes I wanted to create were the vampire characters of Purgatori and Vampirella, who both appear in comics produced by Dynamite Entertainment. I mentioned that I'd be making two versions of each of them - a normal 28mm scale version and a 28mm scale Chibi version. Here they are.

For my normal version of Purgatori, I decided to base her on an old Citadel Dark Elf Harpie (typical of Games Workshop, she is now out of production). A copy of the Harpie I used is at the far left of my two photos. I remodelled her hair, and added plastic horns taken from a GW Skeletons sprue to her head. I added bone shoulder pads and gave her long fingerless gloves and a bra made of Milliput. I added thigh length boots and remodelled her feet. The Harpie had longer legs and feet, so I hid her taloned feet by surrounding them with a pile of decapitated heads from my spare parts box. She stands on a 25mm diameter MDF base, which is textured with sand. Overall, I'm very pleased with my conversion. There are no official or unofficial versions of Purgatori, which makes my figure unique.

For my figure of Vampirella I chose a Marvel Heroclix figure of a Con Artist from the old Xplosion expansion set as the basis for my conversion. The Heroclix Con Artist appears at the far right of my two photos. It was probably not the most obvious figure to choose but I thought she had potential. Her arms and legs were almost perfect. I remodelled her two bracelets and added extra upper arm bracelets as well. Her body needed extensive reworking and her hair obviously needed lengthening. Cutting off her clothes was not an easy task but a very sharp craft knife helped and I knew if I cut too deeply I could always repair her with modelling putty. Once I had removed all of the extraneous plastic (working with plastic made my life a lot easier!) I then went to work with the modelling putty and remade her bum and boobs and added her iconic costume. Finally, I added her long length hair, based her and textured the base. I'm reasonably happy with her. I think it's a decent effort but I'll be the first to admit that some of the unofficial versions of Vampirella are a lot better than my version. Still, once again, I have a unique figure to add to my collection.

Moving onto the two Chibi versions of Purgatori and Vampirella I must admit that these were a lot easier to convert and more fun to do. Both conversions are based on the same figure - Succubus Vandella from Soda Pop Miniatures' game Super Dungeon Explore. She's at the far left of these two photos. Vandella can be either an evil Mini-Boss or a Hero, depending upon which version you choose for her. She was also the perfect figure for me to convert into Purgatori and Vampirella.
For Purgatori, I first cut off Vandella's pigtails and tail. I snipped the ends off a wooden cocktail stick to use as her horns and glued them to the front of her head. I know they should be curved but this was the best solution I could come up with. I added her left eye with modelling putty as I wanted her to have both eyes open. Then I remodelled her hair and costume with Milliput. All in all, a relatively simple conversion.

For my conversion of Vampirella the first thing I did was to cut her head off (!). This was to make it easier to remove Vandella's wings. It is a fact that Vampirella can fly. In the original black and white Warren series she used to transform into a bat but more recently she spouts wings from her back when she wants to fly. However, because she rarely ever flies I decided to model her without the wings. Once again, I cut off Vandella's pigtails and tail and also her two wings. I cut away the flame from her candle. I repainted the candle so that it is now a scroll holder. I added Vampirella's white collar to her neck, which was made from Milliput. Then I drilled and pinned her head back in place and added her left eye and remodelled her long hair. She was a slightly more complex conversion than Purgatori but in no way a difficult conversion for me.
I have to admit that I absolutely love my Chibi conversions of Purgatori and Vampirella. I think I have captured the look and personality of them both just perfectly. I am now working on ideas on how to incorporate them in a game. Do I stick with Super Dungeon Explore or shall I try out Chibi World? Do I have them in an unlikely team up (with superheroes any team up is possible) or do I have them on opposing sides? I have lots of ideas spinning in my head.
I'd just like to end by saying this project was great fun and I thoroughly enjoyed taking part. A big thank you to Jez and Roger for bringing it to fruition and for allowing me to participate. Here's hoping the project continues next year. 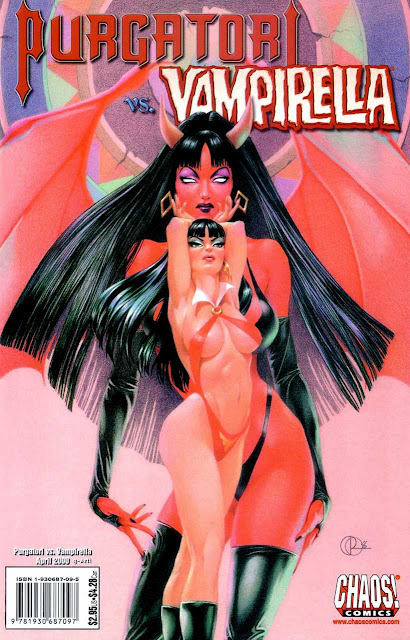