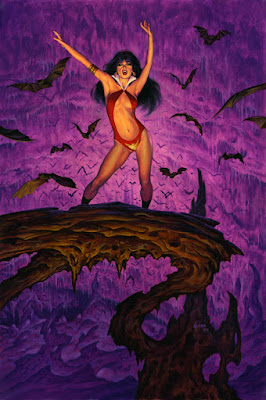 The month of June has been very good to me. More on why later, but first I start as always with another painting of my favourite superhero - Vampirella. Here she is again, painted by my favourite Vampi artist, Joe Jusko. Nice use of colour in this painting. I wonder what music Vampi is dancing to? Bat Out Of Hell, perhaps? :-)

The best news of the month was that I received delivery of my Zombicide: Black Plague expansion sets. I knew I had ordered a whole load of stuff for the Kickstarter pledge but I was very surprised to see my mail-man coming down my garden path carrying two big brown cardboard boxes. Both were filled with amazing goodies. I spent a very enjoyable afternoon opening every box within the two parcels. Usually, when I get a big delivery like this I post a "what-I-got" article on my blog but this time, I'm not going to. There are a lot of unboxing videos on YouTube showing what backers received for their Black Plague pledges. I watched a lot of them, whilst waiting for my stuff to arrive and they show what's available far better than a few photos of mine could. 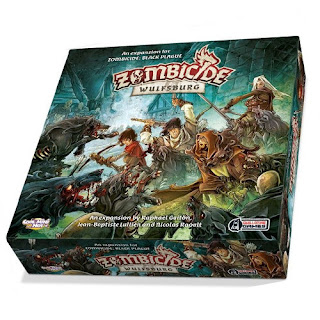 What I will say is that I ordered the Wulfsburg expansion set, extra tiles, some very useful plastic card holders and every single figure that was available for the game. That means I now have nearly 100 Heroes to fight the Zombie hordes. The Zombies have also grown stronger with extra Zombies, including Deadeye Walkers (aka Zombie Archers), Notoriously Plagued Characters (Zombie NPCs), Zombie Crowz, Zombie Wolves and some truly awesome Zombie Abominations like the Ablobination, the Abominalpha, the Abominotaur, the Abominarat and the Abominatroll. What is amazing about all of the new figures in these sets is that the sculptors have really raised their game. The standard of sculpting is absolutely top notch! Painting figures of this high quality will be a labour of love.

I have just about finished painting the last of my Zombies from the basic Zombicide: Black Plague boxed set. I was hoping to get them finished before my expansion sets arrived but no matter. They'll be finished within the week. As soon as they are done I'll photograph them all and then I'll be posting lots of reviews of the figures from that set on my blog. Batreps will follow later. However, I'm resisting the temptation to dive straight into my new stuff and start painting some choice figures from this massive collection of minis. 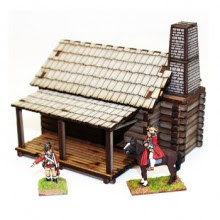 What I plan on concentrating on next are my Shadows of Brimstone figures. They'll be taking centre stage on my painting desk. I am determined to make a push to get them all painted. Other stuff will get painted as well, as I like to have a few things going on at once. Currently, in addition to my Zombicide: Black Plague Zombies I am also painting a few figures for the Judge Dredd Miniatures Game - Fatties and robots. I have been making some buildings and scenery from 4Ground for Shadows of Brimstone and Six Gun Sound. To the left is a photo of a New England Settler's Cabin taken from the 4Ground webstore. This was the very first 28mm scale Wild West building that I bought and made. In my opinion, 4Ground make the best buildings for any genre. They are pricey but you are paying for top quality. I'll be slowly building up my collection of Wild West buildings in the months to come, buying one or two per month, mainly from 4Ground but not exclusively so.

This has also been a very good month for me playing games. I have played games of Airfix Battles, Rum and Bones and Thunderbirds, once each, four games of Heroclix and six games of Shadows of Brimstone, repeatedly playing the High Noon Duel scenario from the Frontier Town expansion set using a different hero each time against the Outlaw gunman. It is always nice to find the time to play some games but this month has been exceptional for me. Okay, so many of the games I played were short ones, lasting less than an hour each, but I'm still overjoyed to have played so many games in just four weeks.
Posted by Vampifan at 08:59