Earlier this year I renewed my interest in the superheroes series of the Teenage Mutant Ninja Turtles thanks to an inspiring series of posts shown on my good friend Andy's blog, da Gobbo's Grotto Blog. I ended up buying most of the figures he had bought for this project with just a couple of exceptions, most notably, April O'Neil and Splinter. Today I'm going to review another ally of the Turtles and the first of their major opponents. All of these figures were made by Italian firm, Greebo Games. Delivery took a couple of weeks but they were a good company to deal with. 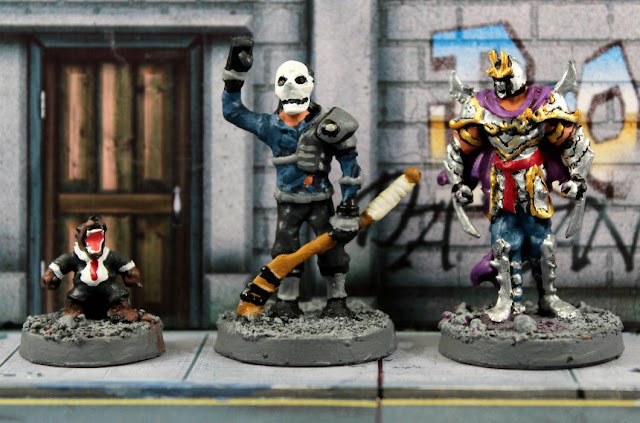 At the far left is a tiny figure called Mr. TM. I know hardly anything about him. I did not order him, but Greebo Games kindly sent him out as a thank you for my order. Hey, I'm not going to turn down a free figure and he seems to fit in with this selection of figures. I think the TM stands for Tournament Miniature as he is one of the Greebo Games Fantasy Football Tournament Miniatures special edition figures. But for me, he is Mister Tiny Mouse. I don't even know what species he is - he could be almost any furry animal. My thoughts are to use him as a kind of criminal overlord, not so much as a Mr. Big but more a Mr. Tiny, but still with the same kind of clout and influence. If he stays behind the scene out of sight whilst masterminding a crime-wave, the heroes will get quite a surprise when they finally reveal who is behind it all. "What! You're the mastermind?" 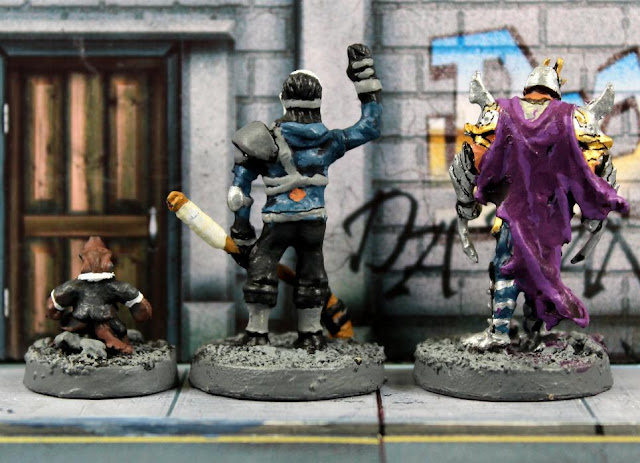 The next two characters are both from the TMNT series. In the centre is Casey Jones. A vigilante who wears a hockey mask to protect his identity, Casey has become one of the Turtles' closest allies, as well as a love interest to April O'Neil. Casey first encountered the Turtles after having a fight with Raphael. He fights crime with an assortment of sporting goods he carries in a golf bag, such as baseball bats, golf clubs, and hockey sticks. On the Greebo Games website he is known as Hoky Jo - Referee. He is a two piece casting with his left hand and hockey stick being a separate component. He is also very tall. He stands 35mm tall. This will put a lot of you off him but not me.
The main enemy of the Turtles is Shredder. He is a villainous ninjutsu master called Oroku Saki who is the leader of the Foot Clan group of ninja assassins. In every incarnation of the TMNT franchise, he has been the arch-enemy of Splinter and the Turtles. Shredder prefers to use his armour instead of weapons in some versions. This terrific figure is as tall as Casey and he is known as Shiju the Blade Master on the Greebo Games webstore. He is a one-piece casting and I think in his case, his oversized height works to his advantage.

These three villains are known from left to right as Krang, Bebop and Rocksteady. Krang is an alien from Dimension X and he uses the torso of a muscular robot as his cockpit to move around whilst on Earth. His personal goal is to rule all dimensions. Upon his arrival on Earth he soon allied himself with Shredder and the two have worked together ever since. The figure stands 40mm tall but because he is essentially a robot construct, I don't mind that he is clearly oversized. He comes in three parts with his arms being separate from the body and legs. Greebo Games list him as Mind Golem on their webstore.

Bebop and Rocksteady are a team who were originally humans in a New York street gang controlled by Shredder. When they lost a battle with the Turtles, Shredder offered to make them more powerful by transforming them into a mutated warthog and rhinoceros respectively with neither of them fully knowing the exact details of the transformation. The transformation worked, making them bigger, stronger and tougher but added nothing to their lowly intelligence. They are simple musclemen who come back time and time again to battle the Turtles and always without success. Again they are vastly oversized figures but that doesn't bother me simply because they are mutants. Bebop came in six parts, body, arms and legs, two hands, head and two tusks. He was not easy to put together. Those tusks caused me considerable grief! Rocksteady came in four parts - body and legs, head and two arms. I did a lot of drilling and pinning on these models to ensure a clean bond. You will find them on the Greebo Games webstore as Razorbog and Rynock respectively.
Mr. TM costs 4.99 Euros. Casey Jones, Bebop and Rocksteady cost 6.99 Euros each and Shredder and Krang cost 7.99 Euros each. You will find most of them as part of the Tartalar Fantasy Football team, where they can be purchased individually if you click on the Single Player tab of the Greebo Games webstore. Mr. TM can be found in the Tournament Miniatures section.
For more information on Casey and Shredder please check out Andy's blog here.
And for more information on Krang, Bebop and Rocksteady check out Andy's blog here.
He knows far more about the Teenage Mutant Ninja Turtles than I do. The main reason for doing this project was so I could use the figures in a game and the game I most want to use them in is 7TV2e. However, there are no official stats for any of the TMNT characters. Fortunately, my good friend Andy, came to the rescue and created stats for them all. You can see his 7TV2e stats for the Turtles and their allies here  and the stats for their enemies here.
Andy, I salute you!
Posted by Vampifan at 08:36