This is the last of my posts reviewing all of the figures that are contained within the Zombicide: Black Plague core set. I have left the most numerous type of Zombie until last - the Male Walkers. There are 21 figures of Male Walkers, which are sculpted in three different poses. Apart from the gender change, Male Walkers are identical to Female Walkers regarding the rules of the game. 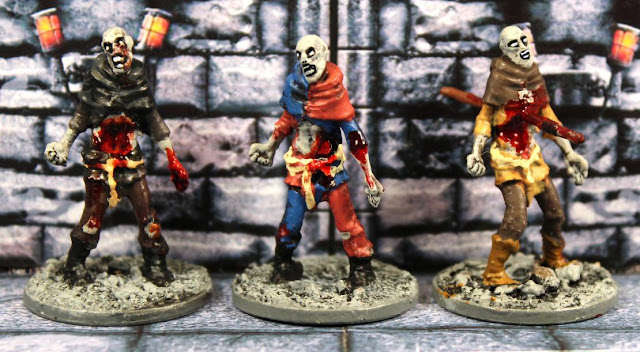 Two of these three Male Walkers have not been converted. For the one at the far left, I copied his colour scheme from the rulebook. The one in the middle has the red and blue livery that I used on one of each Zombie sculpt. 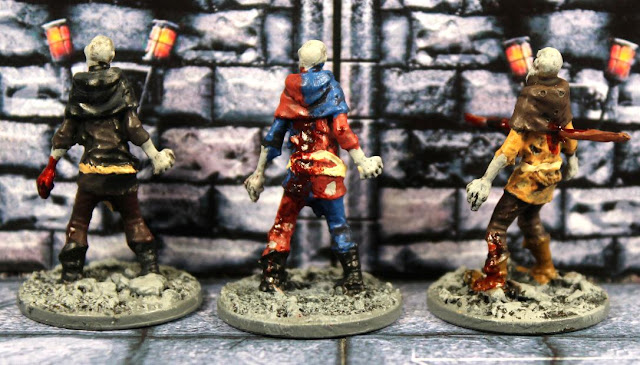 The Walker at the far right sports my dark brown and ochre yellow colour scheme, which has also been used on one of each of the nine Zombie sculpts. I drilled a hole through his chest and inserted a short spear from my spare parts box into the hole. The pointy bit is sticking out of his front but is rather obscured by a lot of blood. Actually, the spear was a lot longer but I had to cut a good bit off from the back because it stuck out too much and made it difficult for me to store him in the box with the others.

These next four have all been converted. Starting with the Walker at the far left, I drilled a big hole into his stomach. I don't know why I didn't have any intestines spilling out of it. A lapse on my part! Next to him, this Walker had his left arm hacked off at the elbow.

For the Walker second from the right I glued the severed gloved arm of a Fatty to the back of his base. It looks huge, doesn't it? The Walker at the far right had his lower body swapped with the lower body of another Walker, whom you can see below in the final two photographs. I like how he is lurching to one side. 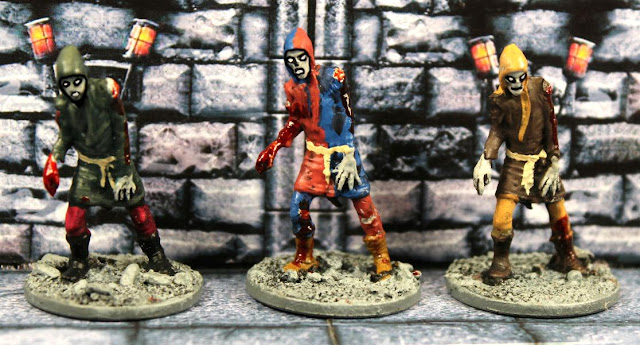 These next three Walkers are all unconverted. Only their paint schemes makes them look different. The Walker at the far left is leaning forward more than the other two next to him. 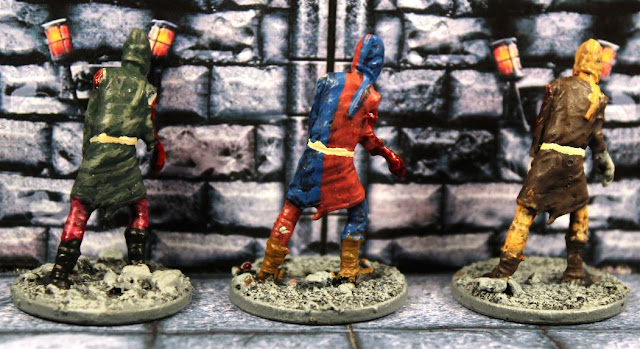 I have nothing to say about the other two other than they sport the by now familiar red and blue and brown and ochre colour schemes.

These next four Walkers have all had minor conversions done to them. The Walker at the far left had a few holes drilled into his body. The next Walker in line had his arm chopped off below the elbow.

The Walker second from the right had a severed arm glued to the back of his base. For the Walker at the far right I repositioned his right arm so that it is bent at the elbow and pointing forward instead of to his side. 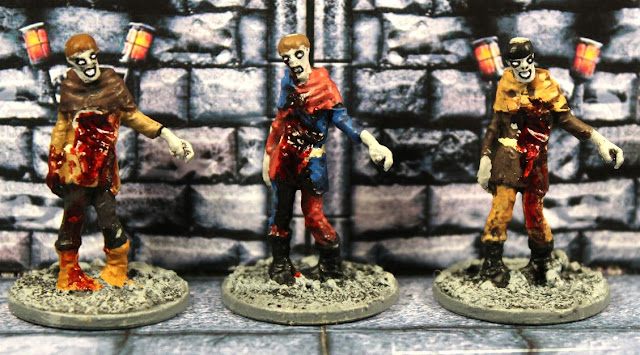 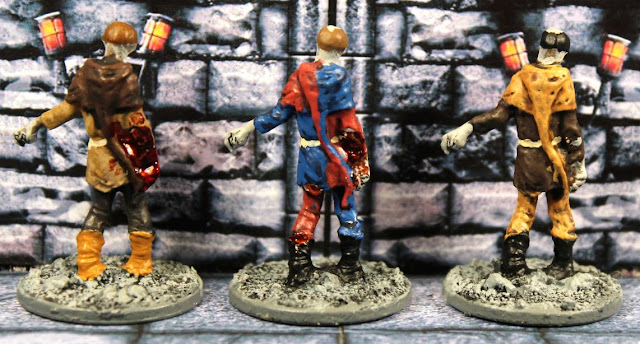 The Walker in the centre of this trio is entirely unremarkable except to say he bled a lot from that stomach wound. Once again, where are the spilled intestines? I clearly wasn't thinking straight when I painted and converted these!

Finally, we have four more converted Male Walkers. The guy at the far left had a hole drilled into his heart. Next to him is another victim of hacked off arm syndrome.

The Walker who is second from the right has had a severed hand glued to the front of his base. Last of all, is the Walker who had the lower body swapped with the Walker I showed above. I had to remodel the end of his hood with Milliput.
It is a wonderful feeling whenever I complete a collection of figures. I know this collection is not finished yet, thanks to the many expansion sets and add-ons I received, but I'm just happy to have completed everything from the core set. That in itself is a worthy achievement and it gives me another set of figures for which I'm very proud of.
I do have one more set of Zombicide: Black Plague Survivors to show you, but they are not official figures for the game. Let us just say, they are very different and leave it at that for now. I haven't decided whether to show them in my next post, which would round off this series of articles very nicely, or to keep them as a surprise for a future post. I'll mull it over and you'll find out what I've decided next week. Of course, if you do have an opinion on what I should do in this instance, please let me know in the comments section below.
Posted by Vampifan at 08:37