I could have called this post "The New and the Old" because I am looking at the two opposite ends of the Justice Department - Cadet Judges, who are are training to become fully-fledged Judges, and Long Walk Judges, who have come to the end of their career.
Though spending most of their time concealed within  the Academy of Law, Cadets are occasionally allowed into the city, under the strict watch of a Judge. Despite being barely in their teens, a well-trained Cadet has been the ultimate nemesis for more than one perp. A Cadet is inducted into the Academy either as a cloned infant (as Judge Dredd did), or as a child aged five (although older children have been recruited). After this, unsupervised contact with the city outside is forbidden, in order to maintain the strictest discipline and mental conditioning. Training usually lasts for 15 years, although in some exceptional cases, this is shortened by a few years. Cadet Judges must leave both the Academy and the city itself during their "Hot-dog Run" - a training mission into the Cursed Earth, to test the Cadets under combat conditions; fatalities are not unknown. A senior Judge will command and assess the Cadets during the Hot-dog Run. On graduating from the Academy, Cadets are known as Rookie Judges.
After a career on the streets of Mega City One, retiring Judges usually become Academy of Law Tutors or take the Long Walk, choosing to bring the Law to Lawless regions such as the Cursed Earth or the Undercity. Many die quickly to the hazards they encounter but a select few will survive, even thrive, on the adversity, becoming a dangerous force for those who choose to hide beyond the walls of Mega City One.

The four Cadet Judges to the left of my two photos directly above and below were produced by Mongoose Publishing. I have not yet named any of them. All four of them are the same sculpt but three have been converted. The one at the far left is the original sculpt. The Cadet second from the left has had his arms repositioned and his feet re-sculpted in different positions to the original. I also painted him as an African/American to further distinguish him from the others. For the Cadet third from the left, I added Milliput breasts to the figure to make her female and I repositioned her arms. For the other one, third from the right, I cut off his Lawgiver Pistol and glued it on his right hand. His arms have also been repositioned. I'm still not sure why I bought four of them but there was no way I could leave four looking the same. 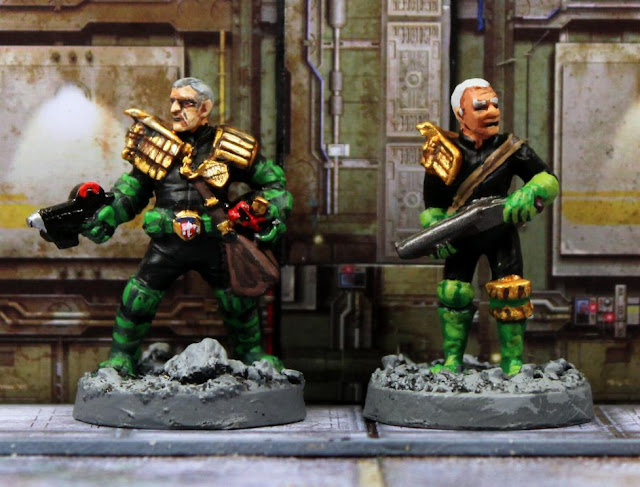 Moving on, these are to date, my only two Long Walk Judges. At the left is Judge William Minty, who was a very minor character in the comic series. He appeared in a one-off strip in 1980. In the story, Judge Dredd is assigned to assist an older Judge in the routine arrest of a gang of criminals. During the tracking down and apprehension of the 'perps' Dredd remarks on a number of flaws in Minty's methods. Eventually Minty is wounded when he hesitates to shoot one of the gang. As Minty recovers in hospital, Dredd informs him that he had to file an adverse report and that Minty is going to be retired from the streets. Minty gives a poignant response, "It had to come... I -I always knew you were on this case just to watch me... When you get old, you start gettin' strange notions... like maybe people aren't so bad. Maybe if we treat 'em with kindness, the good in them will come out! I guess that's when it's time to quit." Dredd explains that due to his excellent record Minty is eligible to become a Tutor at the Academy of Law. However Minty declines the offer "I've been on the streets too long, there's only one way for me... The Long Walk!"
This excellent figure was sculpted by Hasslefree's Kevin White. It was designed as a limited edition figure for the Cancer Research and Multiple Sclerosis charities. When I ordered my figure, I also received a signed photo of Edmund Dehn, who plays Judge Minty in the fan film (see below). It is much treasured. 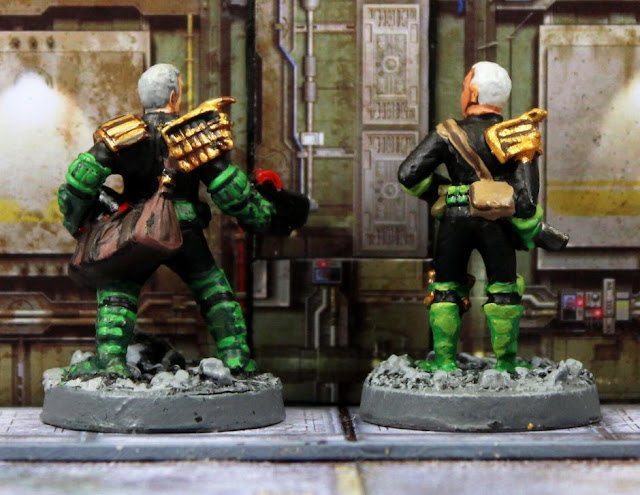 The other Long Walk Judge, whom I have not named yet, was produced by Warlord Games. He looks like he has been surviving outside for quite a while. He has either lost his Lawgiver Pistol or perhaps it ran out of ammo, and he has replaced it with a Sawed-Off Stump Gun. Note that he is using his left shoulder pad as knee pad, which is a nice touch. 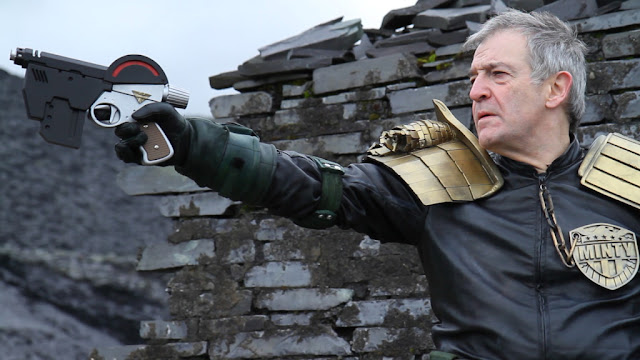 I mentioned earlier that the actor, Edmund Dehn, played Judge Minty in a fan film. Here he is above in a scene from the film. You can watch it on YouTube here - https://www.youtube.com/watch?v=aavS_XUITXU&feature=youtu.be&list=PLHKk4pYwD-mJuItPtscho6JY5_eP9thTp
You can also find more information about the film here- http://www.judgeminty.com
I don't want to say too much about it in case you haven't seen it but I can highly recommend it. For a fan film, the production values are very high. Note how accurate his uniform and Lawgiver Pistol are.
Posted by Vampifan at 10:01