The Mega City One Justice Department is both superbly well armed and well equipped. Given the volatile nature of the huge sprawling metropolis things can can turn ugly very rapidly and a situation like Block Wars, for example, needs quelling quickly and efficiently. Riot Judges are among the most hardened Street Judges, equipped with strengthened armour, shields and riot foam. A squad of Riot Judges are capable of facing down the rampaging inhabitants of a small block without support. A very specialised Judge, the Heavy Weapons units are deployed only when a great threat looms over Mega City One or when citizens are in danger from non-residents of the city. Armed with a selection of very powerful weaponry, the Heavy Weapons Judge can turn the tide of an invasion. Finally, the Flying Squad Judges are Street Judges equipped with Jetpacks, making them a highly mobile force.

The figure at the far left of this group is a Heavy Weapons Judge armed with a Colt M2000 Widowmaker, which is a combined Sub-Machine Gun and self-loading Scattergun. It is normally seen in the hands of specialist units.
Next in line is a Judge armed with a Stub Gun. The Stub Gun fires a continuous laser beam that is capable of slicing through thick armour plating in seconds. However, it is prone to overheating, and can be as dangerous to the user as the intended target. They are thus only used in extreme emergencies.

The kneeling Judge is armed with a Lazooka, a shoulder-mounted weapon that is used against heavily armoured targets. The Lazooka is a high-powered laser weapon that requires time to build up enough energy to fire - however, when it finally unleashes its blast, there are few armoured targets that can continue undamaged.
Finally, the Judge at the far right is armed with an Anti-Personnel Rotary Cannon. The forerunner of the Street Cannon, this weapon used to be mounted on Justice Department vehicles. In recent years, suitably equipped with advanced stabilisation systems, it is now more typically found in the hands of Heavy Weapons units within the Justice Department.
All four of these figures were produced by Warlord Games. 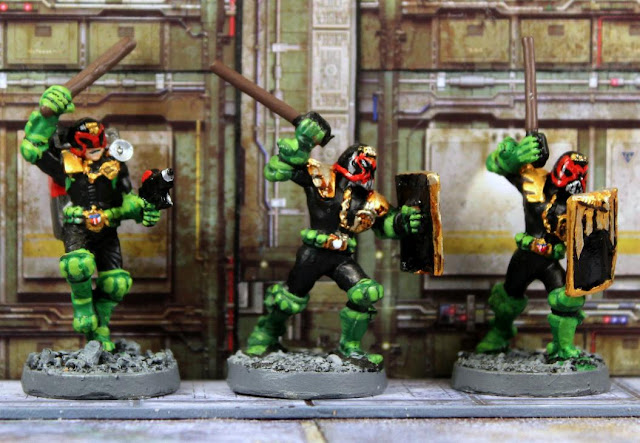 I could have shown the Flying Squad Judge with my Street Judges that I reviewed last post, but I decided to fit him in here with my Riot Judges. Flying Squad Judges eschew their Lawmaster Bikes for Jetpacks. Technically speaking, a Jetpack does not allow true flight. Instead, it allows its user to leap great distances in a single bound. In JDMG, a Jetpack may be used in any Move Action, allowing a model to move up to 15" on the game board, instead of its usual Move (normally just 5") and the model temporarily gains the Flyer type during this Move Action only. An Agility check must be made upon landing. If this is failed, the model loses any further actions this Phase, and will also lose 1 Hit. I have named this figure as Judge Smith, as he was called on page 38 of the JDMG rulebook. His figure was produced by Warlord Games. 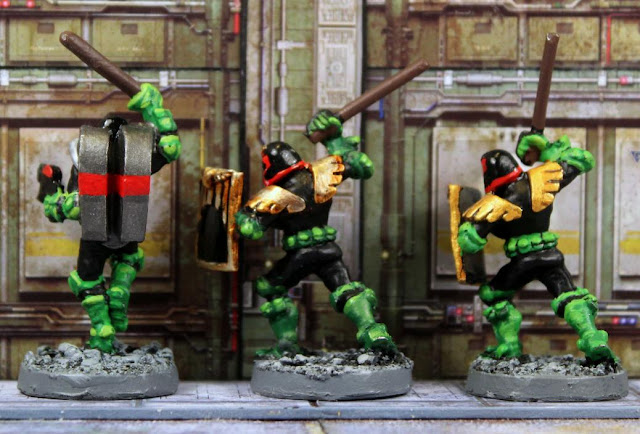 The other two figures are identical Riot Judges from Warlord Games. The one at far right has had his arms slightly repositioned just to make him appear different to his colleague. Both are equipped with Riot Shields. In JDMG, the Riot Shield grants its user a single Parry. The Riot Armour is more heavily armoured than Justice Department Standard Issue Armour with a +7 Armour Value. The Riot Armour Helmet includes a Respirator. 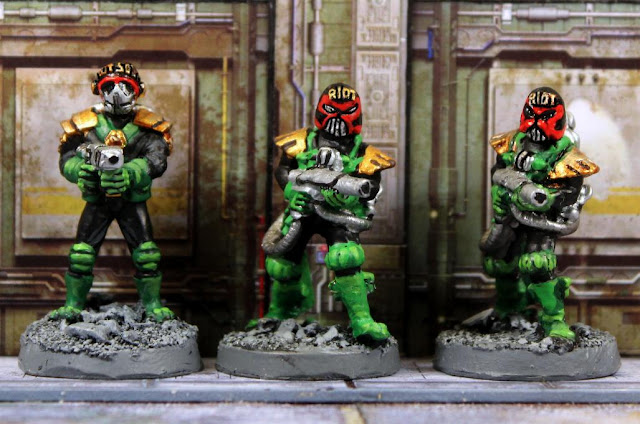 The Riot Judge at the far left of these two photos directly above and below is produced by Wargames Foundry. He is armed with a Riot Foam Rifle. Quickly coalescing into a rigid substance that literally holds suspects immobile, Riot Foam is used by Judges who wish to apprehend large numbers of perps at once, and is especially effective during Block Wars. Any Infantry model that is hit by Riot Foam will not lose any Hits but instead be completely immobilised. The model will be unable to take any actions except a single Special Action in each of its own Phases as it tries to break out of the foam with a successful Agility check. If successful, the model has somehow managed to wriggle free and can take actions as normal in its next Phase. Note that the Warlord Games Riot Judges have the word "RIOT" printed on their helmets. The Foundry figure has the words "RIOT SQUAD" printed on his helmet. 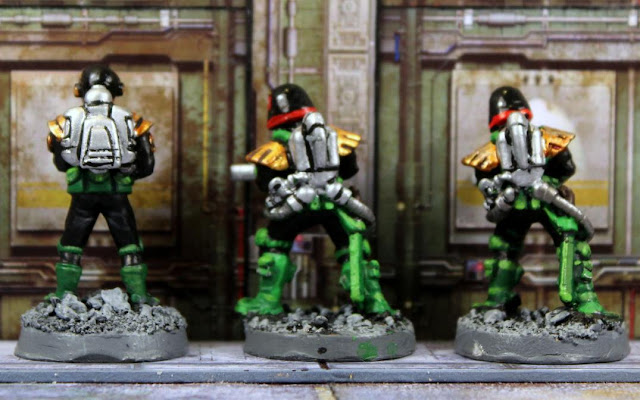 The other two figures are the Warlord Games versions of a Riot Judge with Riot Foam. Both are identical but were bought and painted many years apart. The one at the far right is the older of the two and was painted with Citadel paints. The newer figure, in the centre, was painted very recently with my Foundry paints.
Posted by Vampifan at 09:00