Continuing my reviews of the Mega City One Justice Department, I am going to concentrate on three of their important divisions this time - Med Division, Tek Division and Psi Division. Med Division formulates medical policy for the entire Justice Department. It is sub-divided into several critical units - Personnel Unit, Med-Lab, Psych Unit, Dream Police and Genetic Control. Med Division's brief is to protect the Justice Department from any agent threatening the health of its personnel.
The main body of the Tek judges is rarely seen on the streets of Mega City One. They exist to devise cutting-edge technologies to augment Justice Department operations. Tek-Div provides equipment, vehicles and weaponry to specifications demanded by the relevant divisions. Every Sector House will have a Tek Judge contingent. The principle Tek Division departments are Tek Labs, Engineer Corps, Fleet Services and the Forensics Squad.
One of the last Justice Department  divisions to be formed, Psi Division took advantage of the massive increase in psychic potential apparently generated by the Great Atomic War of 2070 to provide the Justice Department with a small, but indispensable organisation. Psi Judges are not unique to Mega City One, though whereas most other city-states train their psychics to the exclusion of all else, Psi Division produces operatives who are not only highly disciplined in the use of their strange powers, but are also fully-fledged Street Judges, able to outgun and out-think enemies of the Justice Department. Psi-Division is based at Omar House in Sector 44, within sight of the Grand Hall of Justice. It comprises three departments - Psi-School, Psi-Lab and Psi-Operations.

Of the two Med Judges shown above and below, the one at the far left, Med Judge Nash, has been detailed previously (see here ) as a member of Judge Scott's task force. Med Judge Nash will be a major player in my JDMG campaign. The female standing next to him is Med Judge Stallard. Med Judges are instantly identifiable by their red and white helmets and shoulder pads. Both figures were produced by Warlord Games. In JDMG, all Med Judges have the special rule, Healthy Hands. So long as the Med Judge survives the battle, he may use his Medic Talent on a force afterwards. Note that says "force" not "figure" so a single surviving Med Judge can heal a lot of wounded patients.

The first of my three Tek Judges is produced by Wargames Foundry as AD46 Tek Judge Deex. I saw no reason to change his name. I have said before that the Foundry figures are slightly taller than the Mongoose and Warlord Games figures but bear in mind that the Foundry figures come with integral metal bases and not slottatabs. So by sticking a Foundry figure onto a slottabase will automatically make him appear taller. Moving on, the remaining two figures were both produced by Warlord Games and they are Tek Judge Nielsson (second from right) and Tek Judge Forrester (at far right). In JDMG all Tek Judges have the special rule, Can We Fix It? The Tek Judge may attempt to repair any vehicle he is on board. Alternatively, he can also attempt to repair any vehicle he is in contact with, so long as the vehicle did not move last time its driver took his actions. The Tek Judge can attempt to restore a lost Hit or repair an existing critical hit by performing a Special Action and making a successful Will check. 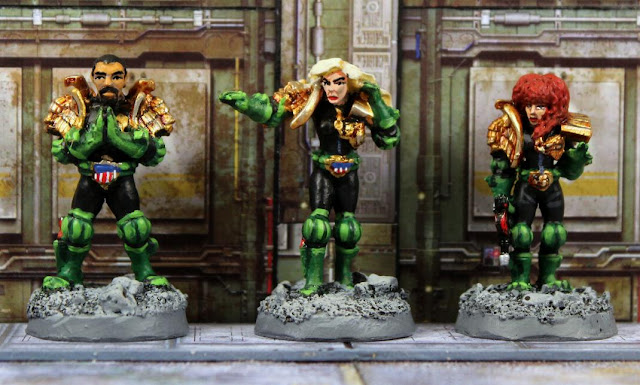 These three famous Psi Judges have all appeared in the Judge Dredd comic series and are all made by Wargames Foundry. From left to right are AD17 Chief Psi Judge Omar, AD18 Psi Judge Anderson and AD42 Psi Judge Karyn. Psi Judge Omar became head of Psi Division after his predecessor, Judge Ecks was killed in the Apocalypse War. He personally assisted Judge Dredd in his investigation into the haunting of a Sector House, and later he exonerated Judge Anderson when she was accused of negligently permitting the Dark Judges to escape and threaten the city. When psi-criminal, Shojun the Warlord, unleashed the demonic Seven Samurai on the city, Omar volunteered to sacrifice his own life in a suicide attack to destroy them using a psionic amplifier. He was succeeded as head of Psi-Division by Psi Judge Shenker, the current holder of this office. Note that the Psi Division headquarters, Omar House, was named after Psi Judge Omar in honour of his sacrifice. 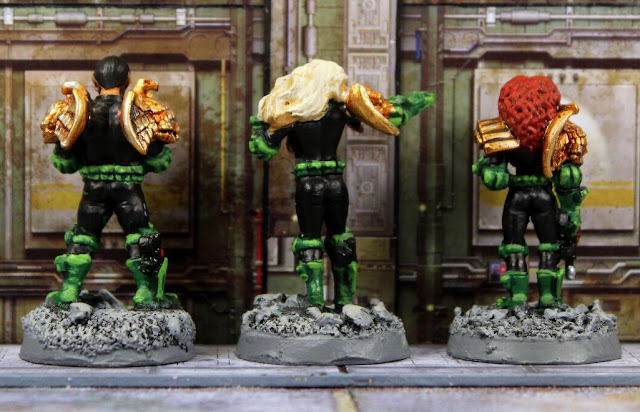 In the centre of this renowned trio is Psi Judge Anderson. The most famous of all Judges within Psi Division, Cassandra Anderson has fought against the enemies of, and made great sacrifices for, Mega City One. She is one of the premier psychics of her generation and has earned the utmost respect from Judge Dredd. In JDMG, she is a Level:17 Infantry Hero with numerous street skills and telepathic talents. It was a tough decision for me whether to choose this figure to represent Psi Judge Anderson in my campaign or use the Warlord Games version shown below. By a narrow margin, this version got my vote. In the Karl Urban Dredd movie, when Dredd asked Anderson why she didn't wear her helmet, she replied that the helmet interfered with her telepathic powers. I thought this was a good explanation of why Psi Judges are so often portrayed without their helmets on.
Psi Judge Karyn first worked with Dredd in the initial Raptaur invasion and would work alongside him several times afterwards. She primarily handled supernatural threats. Her career met an ignoble end in 2127. When she and Dredd led a rescue mission into the Undercity, they discovered the Shadow King had escaped there and spent the last four years building up an army of vampiric Troggies. After the creature possessed Dredd, she tried to emulate Anderson again by drawing its spirit into her mind to be imprisoned - the attempt went wrong and she was completely possessed. She is currently locked in a Psi-Division cell, and it is considered unlikely her mind can ever be retrieved.

These four Psi Judges were produced by Warlord Games, although the middle two were originally made by Mongoose Publishing. I have named all four them. At the far left is Psi Judge Devereux. She was originally meant to represent Psi Judge Anderson and was part of the Heroes of Mega City One boxed set. So that there could be no mistaking her for Anderson, I gave her black hair. She is one of my favourite Warlord Games figures. The other two female Psi Judges are the same figure but were bought and painted many years apart. Second from the left is Psi Judge Lister. Note that like Anderson above, her Lawgiver Pistol is in its boot holster. Second from the right is Psi Judge Gibson and she has been slightly converted with her arms being repositioned and I added a Lawgiver Mk.1 Pistol to her left hand. She was painted with Foundry paints whilst Lister was painted with Citadel paints, hence the slight difference in colours.

At the far right of this group is Exorcist Judge Sheady. Hailing from a sub-department of Psi Division, the Exorcist Judges are trained to tackle supernatural entities, such as demons, ghosts and spectres. In addition to their standard equipment, Exorcist Judges are armed with silver-coated boot knives.
Like most other specialist Judges (i.e. Tek and Med), Psi-Judges do not wear badges with their surnames imprinted on them. Instead their badges simply read 'PSI'. This has been apparent in several comic strips featuring the Psi-Judges (although not in all of them, with some artists simply depicting the Judge's surname instead). However, their badges do have their surname imprinted in very small letters on the reverse.
Posted by Vampifan at 10:14