Hailing from another dimension where life itself was deemed to be a crime, the Dark Judges are possibly the worst threat that has ever befallen Mega City One. They cannot be killed and have made the decision to bring their own brand of justice to the city. Despite being beaten back several times, they still represent utter peril for the city and each appearance is marked with massive death tolls that only seem to grow larger each time. Their greatest success was Necropolis, an event that saw the death of 60 million people in Mega City One as they held reign over the entire city. You can learn a lot more about them here - https://en.wikipedia.org/wiki/Dark_Judges
The four Dark Judges are arranged in alphabetical order from left to right in my photos - Judge Death, Judge Fear, Judge Fire and Judge Mortis. Both Wizkids Indyclix and Warlord Games made versions of the four Dark Judges but the four that I'm showcasing here are all made by Wargames Foundry from their 2000AD range of figures. They are slightly taller than the Warlord Games figures and about the same size as the Indyclix figures. 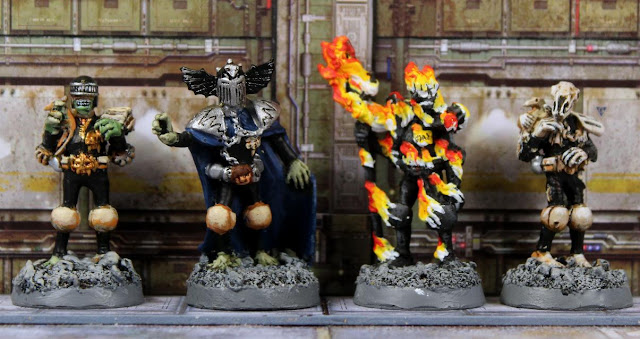 A young sadist thrilled by inflicting pain, Sidney De'ath  would soon go on to murder three bullies from his school. He joined the Judges in order to be able to kill people legally, gaining the nickname "Judge Death" for his hard-line stance on executing all lawbreakers. The psychopathic and obsessive Judge shortly afterwards encountered the witches, Phobia and Nausea, aka the "Sisters of Death", who he saw as a means to achieve his vision of total justice - the complete extermination of all life. He reasoned that since all crime is committed by the living, life itself is a crime. Hence the monster's catchphrase: "The crime is life, the sentence is death!" Using their dark magic, he had himself transformed into the unstoppable undead Judge Death. Along with the "Sisters of Death" and his three fellow Dark Judges, Fear, Fire and Mortis, he wiped his world clean of all life.
In JDMG, all four Dark Judges are frighteningly powerful opponents and are classed as Level: Infinity Illegal Heroes. Judge Death has two Special Abilities - The Crime is Life means all of his Close Combat attacks ignore Armour (his hand phases through it) and are not Weak (quite the opposite!). Secondly, is The Sentence is Death, in which each successful close combat attack will remove a number of Hits equal to the roll of 1d10. Nasty!
When passing judgement on victims, Judge Fear opens his visor to reveal a sight of unspeakable terror that scares the living to death as they are forced to confront fear beyond their capacity to comprehend. In JDMG, Judge Fear has two Special Abilities. The first is Gaze into the Face of Fear. When he opens his visor, Judge Fear reveals a face of unspeakable terror that causes the hearts of those who view it to stop instantly. To do this, Judge Fear makes a normal close combat attack with one Melee Die, which automatically rolls a 10. If he succeeds in causing damage, both models must make opposed Will checks. If Judge Fear wins, his opponent is automatically reduced to 0 Hits. His second special ability is Mantrap. Judge Fear is fond of immobilising his enemies with thrown mantraps. Each mantrap is treated as a shooting weapon with Range 10", Shooting Dice 1, Damage 1 and AP -4. If a mantrap inflicts any Hits on an Infantry model, it will automatically immobilise it. The target may not take any Move actions and may not move at all during Melee actions. As a Special action, it may make an Agility check in order to attempt to free itself from the mantrap. A model may only be affected by one mantrap at a time. 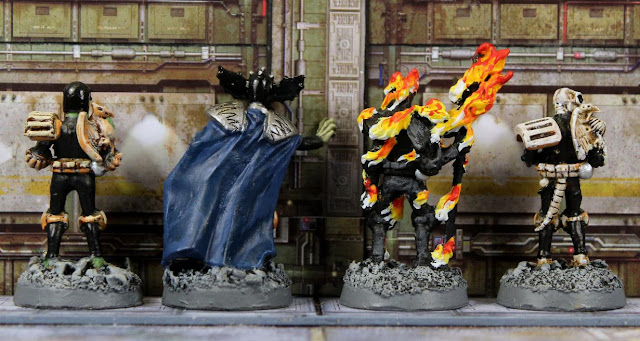 Judge Fire is wreathed in flames from head to foot, from which leers a crisp, blackened skeleton. He wields a fiery trident and revels in burning his victims to death. In JDMG, Judge Fire has two special abilities. The first is Body of Fire. Any model involved in close combat with Judge Fire will automatically catch on fire, with the same effects as a flame-thrower. Judge Fire is himself immune to all effects of all forms of fire. Secondly, he has Flame Strike. His trident is a close combat weapon that has a Damage Score of 3, AP -3 and the Parry special rule. It may also launch a shooting attack with a Range of 18", Shooting Dice 1, Damage 3, AP -3 and the Blast and Explosive 1 special rules.
Often the Dark Judge tasked to prepare the physical bodies of the others, Judge Mortis has the bare skull of a sheep and causes everything he touches to instantly decay. He is the personification of entropy. In JDMG Judge Mortis only has one special ability - Decaying Touch. Entropy follows in the wake of Judge Mortis. At the start of every turn, every model within 4" of Judge Mortis will automatically lose 1 Hit. Each successful close combat attack by Judge Mortis will remove a number of hits equal to the roll of 1d10.

A spirit form may attempt to possess any other model except a robot, within 1" with a Special action. Both models make opposed Will checks and, if the spirit form wins, the enemy is automatically killed and replaced with a model of the Dark Judge. The Dark Judge is restored to full Hits and from the next Turn onwards, may take actions normally.
At the time of writing I have no plans for using the Dark Judges in my JDMG campaign but I still wanted to show you them. The figures made by the three companies I mentioned are all very well sculpted. If you want to collect the Indyclix versions be aware that Judge Death is a Unique figure and is extremely hard to find. The Warlord Games versions were sold individually and as a boxed set with their spirit forms. I bought their spirit forms separately. Of the three versions that were available, I much preferred the Foundry figures. They are still available to buy.
Posted by Vampifan at 09:59