Not all of the gangs who infest the streets of Mega City One are human. Experiments in the past vastly increased the intelligence of apes, with the intentions of using them as advanced slave labour. However, while such science has been outlawed for many years, its legacy remains, in the form of sentient apes. Often corralled into the less desirable parts of the city, it is not unusual for apes to form their own criminal gangs. Most sentient apes are either chimpanzees, gorillas or orang-utans. I'm looking at my chimps in this post. The gorillas and orang-utans will appear in my next post. Chimps form good all-rounders within in an ape gang, able to take on most tasks with success. I haven't yet created any stats for my apes to use in my JDMG campaign but I have given all of my apes names. Most of them will use the stats provided on p.56 of the JDMG rulebook.

The three chimps at the left of the two photos directly above and below were produced by Mongoose Publishing for their Gangs of Mega City One game and sold as part of an ape gang boxed set. At the far left is Chalo, who is armed with a Stump Gun Rifle. Next to him is Milo, who is armed with a Club. Pee-Gee completes this trio and he is armed with a Spit Pistol. These are all really well sculpted and quite small in stature. I love the expressions on their faces.

The female chimp is called Kim Kong. She is a really old figure, and I can't remember who made her but she was sold as a mutant civilian. I should point out that she does not have red eyes. She is wearing a pair of John Lennon style rose-tinted glasses. Oh, and that's a wig she's wearing as well. Most likely she is the girlfriend of one of the other apes. She could be a gang member or she could be an innocent civilian.
At the far right is Jocko, who is armed with a Spit Gun Rifle. This is another really old figure. He was made by Citadel Miniatures for the sci-fi role-playing game of Rogue Trader, which was first published in October 1987. The game was sub-titled Warhammer 40,000 to distinguish it from 2000AD's Rogue Trooper series. The gameplay of Warhammer 40,000: Rogue Trader differed from its main modern-day descendant, Warhammer 40,000, in that it was heavily role-play-oriented, with great detail placed on weaponry and vehicles and the inclusion of a third player (the Games Master) in battles, a role not too different from the Dungeon Master of Dungeons and Dragons. Jocko was sold as a Rogue Trader mutant ganger but his ape-like features make him a perfect addition to my small collection of chimps. 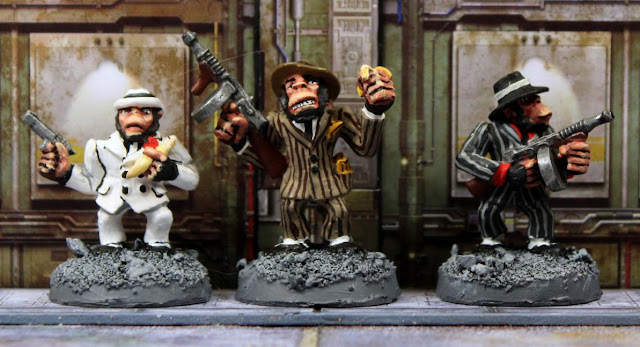 Arguably the most famous ape gang in the Judge Dredd series was the one led by Don Uggie Apelino. Don Uggie encountered Judge Dredd several times - first during a gang war, and later after a foiled attempt to have Dredd assassinated. After the Apocalypse War, radiation regressed his intelligence to that of a normal ape, whereupon he led a group of insane and brutal apes in the Cursed Earth.  Dredd followed a regressed Fast Eeek, and executed the gang - including Apelino - as a danger to Mega City One residents. Don Uggie saw himself as a modern day Al Capone and he styled himself and his followers on 1920's style gangsters. These three figures, with Don Uggie at the far left, were produced by Citadel Miniatures for the old Games Workshop Judge Dredd Role Playing Game. Don Uggie is armed with a Handgun Pistol. 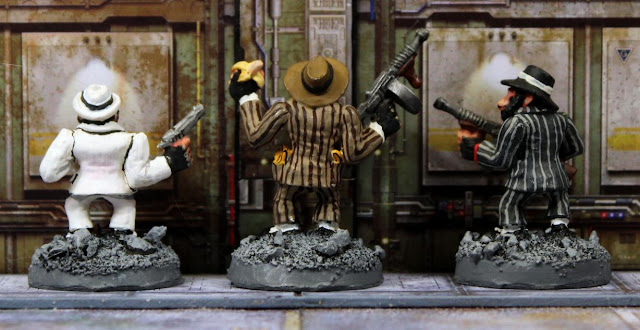 Don Uggie was often accompanied by his two most trusted lieutenants, Joe Bananas (in the centre) and Fast Eeek (at far right). They are armed with the equivalent of Spit Gun Rifles. These are three of my favourite figures from this range but I do have one criticism to make of them - they are way over-scale. Scale was a common problem with the Citadel Judge Dredd range of figures. Some were too small and some were too big. Given that these are just chimps, they are as tall as my ape gang gorillas. It is a shame because other than being too big their sculpts are perfect.
Posted by Vampifan at 09:15